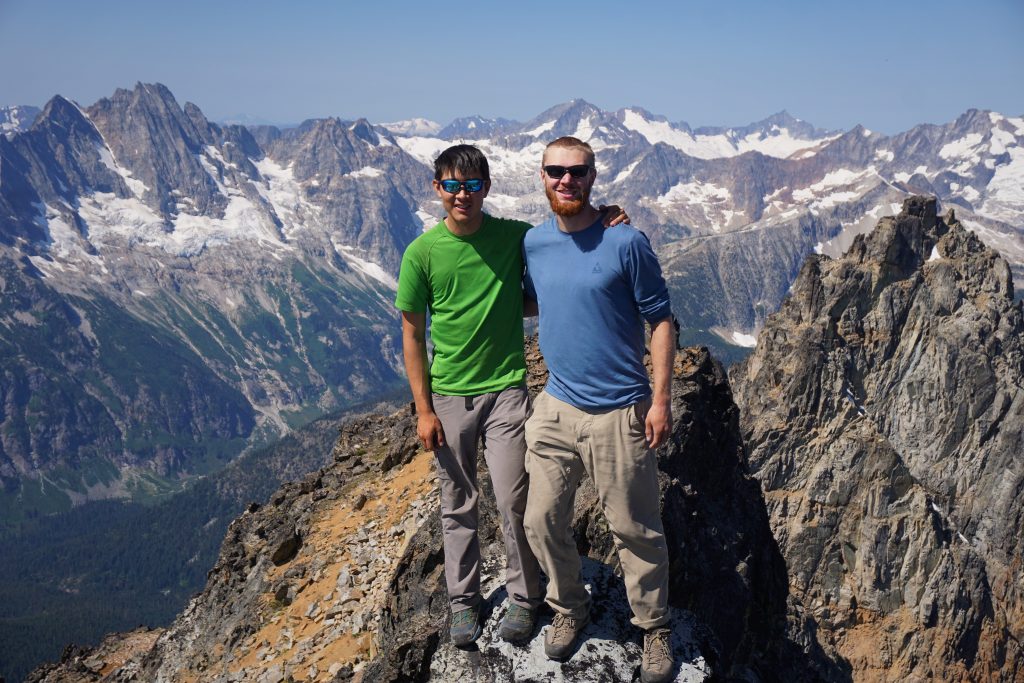 On the final day of our WA Pass four day blast, Jacob and I decided to move into the alpine for a little ridge run up the NE Ridge of Black Peak. The easiest route on Black is just class 3-4 and the approach is short, so it was almost surprising that I still had not done Black Peak, a Cascade classic. But the NE Ridge, a long and exposed scramble, sounded like a much better way to experience the lofty North Cascade peak.

We left the Rainy Pass trailhead a little before 6 and started hiking toward Heather Pass. The morning light was wonderful in the meadows.

We got to the Heather Pass turnoff above Lake Ann right at sunrise.

After great delay taking sunrise-flower photos, we turned off towards Heather Pass and got our first view of Black through the trees! It looked so far away, and yet so close. The latter is the truth.

After taking the trail downhill a little bit, we crossed the boulder field towards Lewis Lake. It was bomber talus and we had some fun boulder hopping. It went by much more quickly than we had expected.

The outlet of Lewis Lake was this perfect little stream trickling through a rock bed. With the golden hues of the morning light, it felt so tranquil and perfect.

We contoured around the right side of Lewis Lake, trying not to disturb campers who had camped literally right next to the trail. On the far side of the lake, the trail climbs gently through larch glades to Wing Lake.

Wing Lake is at treeline and has a dominating view of the east face of Black Peak. It is a very beautiful setting and must be magical during larch season in the fall. Sadly, when I went to take a dump, I found unburied toilet paper and human waste, so I buried it along with my own.

Here, we talked to a party who had climbed the NE Ridge the day before and they gave us a good recommendation on the approach: follow the hogsback moraine wide right and then traverse back left to the notch. This allows you to stay on more stable terrain and largely avoid the snow, which we knew would be pretty firm.

We hiked across the slopes to the right, making good time up the crest of the terminal moraine. We ended up crossing some low angle snow, but it could have been avoided on rocks. Microspikes were enough for this snow.

From there, it was a short (but loose) scramble up to the notch at the base of the ridge.

At the notch, one can finally appreciate how steep and long this ridge is! The terrain drops off suddenly to the west down to a steep glacier. I feel like this is unusual for the Cascades, as usually the east sides of ridges are steeper due to more extensive glaciation.

There are many towers on this ridge, but unlike a true ridge climb, you bypass most of them at the 5.3 grade. Especially low down on the ridge, there are all these crumbly vertical towers which we bypassed by scrambling loose ledges and gullies 50 ft below to the left. We passed two parties pitching it out through this section.

About 1/3 of the way through the climb, we arrived at a notch where the obvious path took us slightly right onto the west side of the ridge and up a low 5th section. This was certainly one of the most exposed parts of the climb, looking straight down to tumbling icefall 2000 ft below! I was really proud of Jacob, who confidently soloed this section. Two years ago, he was nervous scrambling 3rd class in approach shoes!

From this section, the climbing improved dramatically. We stayed predominantly on the ridge crest, making fun little low 5th moves with great exposure! We found the rock surprisingly solid on these cruxy sections. People on the internet like to bash this route, talking about the scary rock quality. I never found it to be sketchy, but I could see how placing gear might not be the best.

There were many flat “sidewalks in the sky”, two or three feet wide on the ridge. Who knew this climb would be so much fun?!

Higher up, we approached this dark, steep looking headwall. From afar, it appeared we would have to bypass it, but when we got closer, we found that it was just some steep low 5th climbing straight up!

Above this, the ridge mellowed out and was mostly just 3rd top 4th class all the way to the false summit.

At the base of the summit block, I waited for Jacob and then we made the final easy moves to the true summit, where once again, we were surprisingly by ourselves. It had taken us about 5 hours to reach the summit.

The summit views from Black Peak are easily some of the best I have ever seen in the Cascades. The NE Buttress of Goode is so close you can practically touch it, as is the Logan massif. Forbidden spears the sky in the distance, and the Silent Lakes beckon from across the valley. And finally, I had a classic Cascade bluebird summer day to enjoy these alpine views. Maybe this is the only time it will happen during this wet summer, but it makes it all the more special.

Here at the summit of Black, it was a special time to reflect on our climbing together. This was likely our last climb together for a while, so it was fitting that we chose a climb that was a synthesis of our skills. Jacob always pushed me to become a more technical climber, and I showed him the ways of fast and light alpinism. It is incredible to think of how far we have come in two and a half years, learning multipitch and trad climbing together, to putting up first ice ascents and casually scrambling big alpine routes! Alpine partnerships can take you so much further than you ever can go by yourselves, but great partners can be difficult to find.

A solo trail runner arrived at the summit and took our photo. I asked for his name and he said, “Dallas”. I was immediately suspicious and asked for his last name. “Glass”. It is our NWAC (avalanche) forecaster! He had made it up the standard route in an impressive 2 hours!

We descended the south side route with Dallas having a good time chatting about forecasting, skiing, and whatever else. The scrambling was pretty quick down to the saddle, where it got kinda bad. We split up a little in the sketchy loose-but-not-that-loose moraine terrain and then bid him farewell as he ran off.

We soaked our feet back at Wing Lake. In my youth, I might have jumped in. Then we continued back down the trail.

Across the talus fields, there were two women that had become separated and one was calling for the other, so we helped communicate and reunite them. Once back on the trail, we cruised down the trail, jogging some between all the uphill hikers, arriving back at the car a little over 8 hours after starting.

Overall, the NE Ridge of Black surprised us. We expected boring moves and lots of choss, but the climbing was actually really fun, exposed, and solid where you needed it. It was truly delightful way to end my summer climbs with Jacob. Until the next adventure!