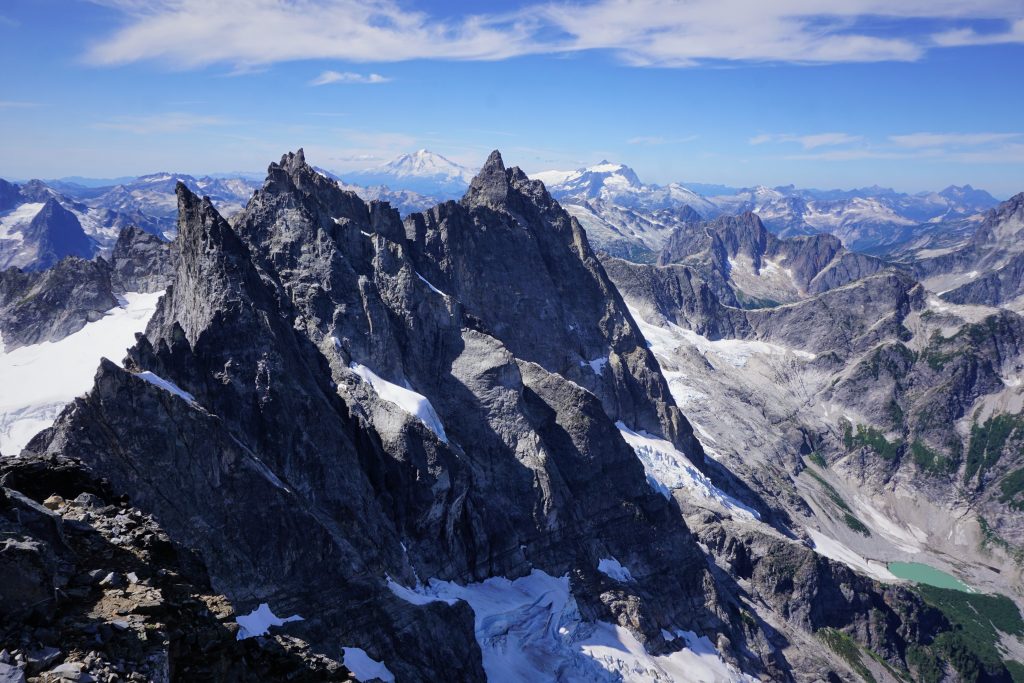 The Pickets at Last

More than any other part of the Cascades, the Picket Range has legendary status. It is the epitome of rugged wild mountains and many consider it to be the most remote area in the lower 48. I had always been interested in visiting, but the stories of impenetrable brush and days of bushwhacking had turned me off. However, recently, the approach to Terror Basin has become pretty well defined and after seeing a post from a friend about it, I convinced Anthony to make a nice little day trip up West McMillan Spire in the Southern Pickets.

Daniel and Logan had gone up this way back in July but turned back due to “hundreds of blowdowns”. We quickly found out what they meant, as we were constantly stepping over downed logs, most of them insignificant, but some larger. Either way, it really slowed down our pace and made it difficult to jog consistently.

We covered the four miles to the base of the hill climb in 1 hour. The hill climb is a notorious 4,000 ft climb in just 2 miles. Fortunately, it is actually a pretty decent trail, maybe slightly worse than the old Mailbox Trail. Anthony and I joked that this could be the next Mailbox!

We kept it at an conversational pace, but my calves were definitely not used to such steep climbing! Anthony does Si repeats every other day, so this was normal business for him.

We reached the heather benches and a nice rocky viewpoint around 2.5 hours in. Here, we met two backpackers heading to Terror Basin. We had never heard of backpackers heading up here into such rugged terrain, so props to them! One of them kindly offered us Starbursts!

The next section follows a decent trail through heather and open forests. The blueberry fields were almost overwhelming, so we snacked along the way.

A short rocky section led up to a notch in the ridge and the first unobstructed view into Terror Basin. Terror, Degenhardt, Inspiration, and the McMillan Spires cut through the glacial scoured slabs, forming an formidable northern wall to the basin. The name “Pickets” was understandable.

The descent down the north side of the notch was quite intimidating steep loose choss in the absence of snow, but if you stay as far skier’s right as you can, it is manageable. Going straight down would definitely be a bad idea!

We followed the raging stream down into the flats of Terror Basin Camp. Here, perfect tent sites have been erected in the rocky meadows. Many streams flow through the flats, giving life to a small amount flowers and lush vegetation. We were only 3:15 from the car, but it felt like we were in a completely different world already, a world still recovering from the scars of glaciation. It was truly one of the most wonderful settings I have ever witnessed in the Cascades.

After a good snack and water break, we started the long traverse over to West McMillan Spire. Generally, we followed benches and slabs, trending slightly downhill to the outlet of the glacial lake. It was not hard terrain, but took some time.

After crossing the outflow of the lake, we started up on beautiful granite slabs. At this point, we still had 2400 ft of climbing left! Fortunately, Anthony was in slab heaven.

The receding glaciers here have left an absolutely perfect slab highway. It was a joy walking up the sticky rock while all around us, waterfalls poured off the cliffs and spires pierced the sky. This is what the North Cascades are all about.

Higher up, we had to cross a short section of snow/glacier. There was nearly bare ice showing, but it was low angle and the sun had softened the surface so we were fine in our trail runners.

Here, we crossed onto reddish rock and the rock quality disintegrated. However, we were able to avoid the worst of it, the rubble gully leading up to the notch, by climbing slightly harder class 3 rock to the right of the gully.

At the notch, we got our first view of the even-more-remote Northern Pickets. The huge Fury massif loomed in the distance and the McMillan Glacier dropped thousands of feet beneath us.

From here, the rock quality got slightly better. It was a mix of hiking and easy scrambling to the true summit of West McMillan Spire.

We reached the summit at 5:30 from the car. My uphill muscles were winded, but my soul felt fulfilled as the most marvelous summit view in the Cascades revealed itself. One cannot come to comprehend the ruggedness of the Pickets until standing on one of their summits. The Southern Pickets were like needles, surrounded by spilling glaciers and thick forests. The North Pickets seemed like a stone’s throw away, but the McMillan Cirque that separated us was a vertical land of cliffs, ice, waterfalls, and brush.

For many years, I had wondered if the Pickets would live up to their hype. So many places – Rainier, the Enchantments – often feel oversold, but the Pickets were just as beautiful and rugged as the legends told. It felt as wild and extreme as I could ever imagine so close to home.

After about 30 minutes on top, we decided to get a move on before the rains came any closer.

We did not do a very good job of staying skier’s left and unfortunately ended up in the loose red gully. This definitely would be a much nicer and faster descent when snow covered! Finally, we got back to the snow crossing and then polished granite slabs.

We retraced our steps back to Terror Basin Camp. One last little awful scree climb got us back to the notch and it was all downhill from there!

We both were dreadfully anticipating the hill climb, but the descent was not that bad! The ground was fortunately very soft and I was able to sort of run / controlled fall down the hillside. After 10,000 feet of gain, my legs were happy to do something other than go downhill, so they actually felt better through the descent.

On the last 4 miles, my legs felt absolutely great and I was able to open up and actually run! Then came all the blowdowns and I felt like I was in the steeplechase, hurdling logs and sometimes even hopping between them. I finished the last 4 miles in 40 minutes, which is a great pace for me on an unmaintained trail like this!

In total, we did 20 miles and 10,000 ft gain in just over 10 hours to climb a barely 8,000 ft peak. What the Pickets lack in elevation they make up for in alpine splendor and ruggedness. This was an incredible day trip, one of the best I have ever done (along with Glacier Peak), and I know it will inspire many more adventures even deeper into the heart of the North Cascades wilderness.