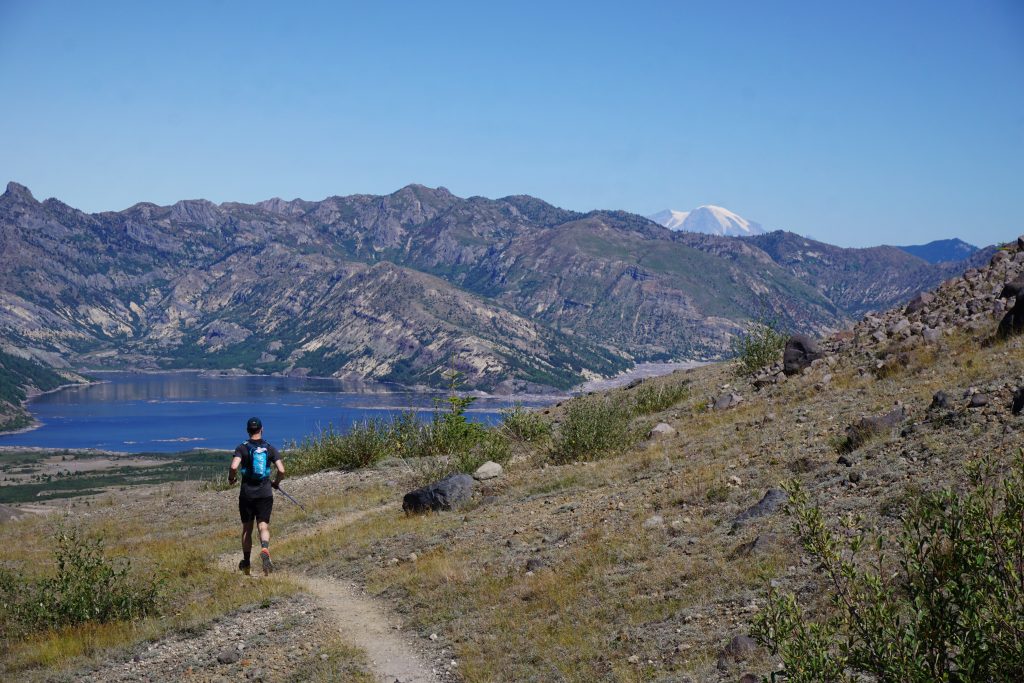 The Loowit Trail is a 28 mile trail the circumnavigates the famous Mt. St. Helens. Daniel ran it last year by himself and raved about the runnable terrain and unique scenery. After Blake and I ran the Timberline Trail back in July, we decided that the Loowit Trail would be a nice cap to the running season and we would get both famous circumnavigations in one summer!

Blake has a funky work schedule, but we found a day midweek that I could take off to do the run. So on my vacation day, I got up at 2:30 am and Daniel and I made the ridiculously long drive to the climber’s bivouac on the south side of St. Helens. We arrived around sunrise and Blake pulled in shortly thereafter. There were lots of “climbers” but no other runners out! Circumnavigating St. Helens has always appealed to me more than climbing it, although skiing it would be fun someday when I want to drive a long ways to attend a backcountry party.

We shuffled up the 2 mile section to actually meet the Loowit Trail. This connector trail would add four miles, brining our day to approximately 32 miles.

Once on the Loowit Trail, we began moving clockwise around the mountain. The first section had lots of volcanic rocks. We mostly boulder hopped between the rocks, following the big wooden posts in the ground that marked the “trail”. It was a fine morning, and low level clouds blanketed the western foothills.

After a few miles of this slow terrain, we got to nicer trees and prairies where we could run a little.

The trail crosses some steeply eroded river valleys. They are nowhere near as large or deep as the ones on Hood or Rainier (probably because they formed so recently), but some are pretty steep. The first little canyon we crossed had a near vertical choss rock step, so we gladly used the fixed line!

Next, we approached the Toutle River crossing. This is by far the biggest river canyon to cross. It cuts probably a thousand feet into the mountainside, forming deep canyons and a year-round water source.

We cruised a few downhill miles before arriving at the river. Since we were entering the dry, hot blast zone, we filtered a good amount of water before continuing onwards. The climb out of the Toutle was not as bad as I expected. There is a solid trail carved out of the sandy hillside.

A little over 10 miles in, I could tell that this was not going to be a good day for me. My legs felt a little lethargic but the main problem is my stomach was very upset. I tried a different brand of trail butter in the morning and it really seemed to make me queasy. I had since switched to solid foods but I knew that I was going to fall behind on caloric intake with these gut problems. But I tried to keep a good pace and focus on the incredible scenery around me.

After the Toutle climb, we entered the blast zone on the north side. Luckily, it was still relatively early in the day so the heat was not too oppressive. Running across miles of lava and pumice fields was very special. I kept having to remind myself that this was Washington, the Evergreen State.

Eventually, we began the long but mellow climb towards Windy Pass. Partway through the climb, there is a delightful sprint that emanates from the hillside. Unlike all the silty rivers, which need to be filtered, this one can be drank straight. We bathed in the shade and cool. It felt like a lunar oasis.

The climb to Windy Pass was not bad and soon we reached our high point for the trip (although the entire trail stays generally around 4000-5000 feet).

At the pass, we peered down into the vast Plains of Abraham. The plains are this almost Biblical-feeling basin miles long and wide, with stretching views of pumice fields, Mt. Adams, and Loowit herself. This was definitely my favorite part of the entire trip and it sure made for some easy running.

After the Plains, I was hoping that we would get some shade, but the sun was relentless. We continued through more ups and downs and drainages.

There was a long, rocky descent before finally entering the trees and shade near the June Lake Junction. We were all getting pretty tired and hot, so we took a break a filtered water at a muddy stream before beginning the long final ascent.

My gut problems were returning once again as we made the final climb back to our turnoff. I did not have any cramping or bonking, but the unpleasant stomach feelings made everything feel way harder than it should have felt. But we continued to hike uphill at a good pace and eventually reached the junction. From here, we all took off, cruising the last two downhill miles at 8 minute mile pace.

We finished in about 9:15 elapsed time for the total 32 miles and ~7000 ft gain. With all the direct sunlight, rocky terrain, and gut problems, it really felt harder than I expected. Still, with the help of Blake and Daniel, we had a great time on a beautiful late summer day. The Loowit Trail definitely lives up to its hype as a stunning, unique trail and is worthy of a trek for any local trail runner!

2 thoughts on “The Loowit Trail”