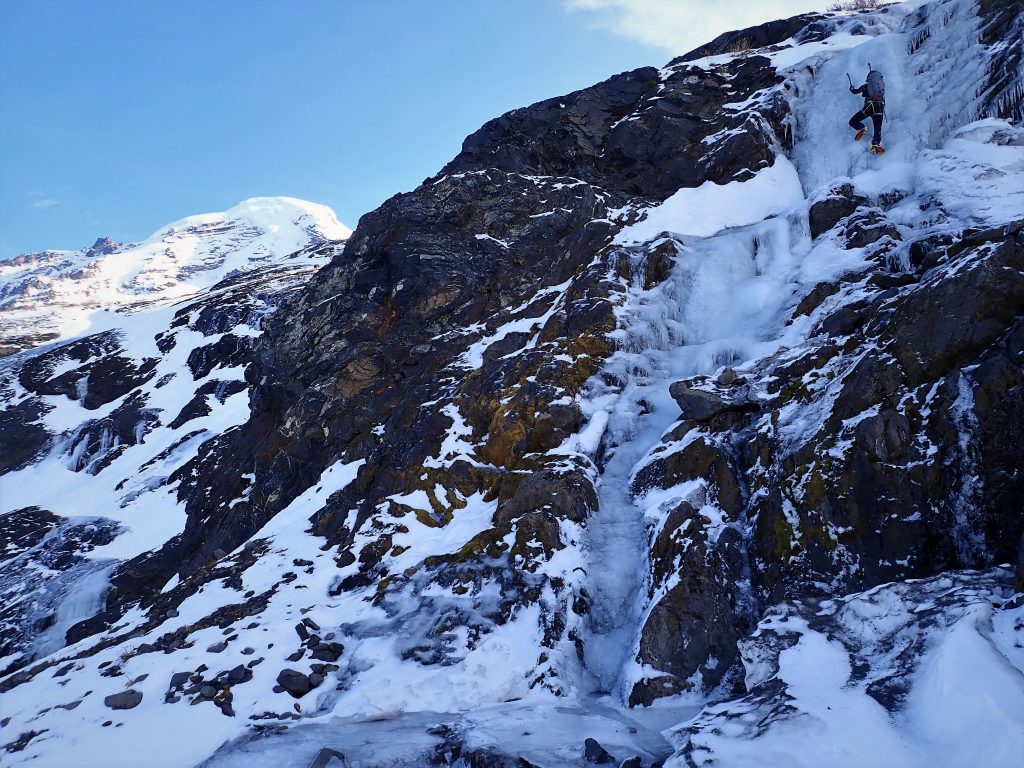 Getting Back into the Swing of Things

After a snowy start to fall in late September and early October, the weather has dried up substantially. A week of cold, clear nights led me and Anthony back to the Heliotrope Ridge Trail. During the previous weekend, Logan and I seraced on the Coleman Glacier. We spotted quite a few good ice flows forming above the approach trail. With another few cold autumn days, we hoped there would be some easy ice to play around on.

The air temperature at the trailhead was a balmy 38 degrees, much warmer than the 28 degrees back down in the town of Glacier. An inversion was present. Still, the ground seemed very cold and icy and our hopes were high.

As we neared the end of the trail, we began to pass some nice frozen gullies. The river crossings were completely frozen over, which was a good sign. We passed some enticing looking climbs, but continued on to the very last drainage before the glacier overlook.

Last week, I had spotted a flow that split the upper headwall. Today, it looked absolutely delicious. There were some other lower flows that we could link together for a fun multi pitch.

The first pitch looked thin, but actually was solid and fat enough to take long screws. Anthony, on his first sticks of the year, led the nice 30 ft WI3 falls.

I eagerly followed as Anthony belayed from screws in a frozen pool of water. It felt so good to be back on real water ice! As much fun as glacial ice is, it just does not have the same beauty and variety as water ice.

The second pitch was easy little ice bumps and we simul soloed it.

I took the third and fourth pitches. The third pitch was short and easy, but the fourth was the awesome gully flow that splits the headwall!

The ice started at about 60 degrees before gradually mellowing out. I love gully flows like this where you are boxed in by rock on either side. The climbing becomes so rhythmic and fluid, much like scrambling up a slab.

Just as I reached the end of our 60 m rope, I reached a snow patch at the end of the low angle gully. I made a bucket seat and belayed Anthony up.

It was about noon, so we took a lunch break at a campsite that overlooks Baker and the Coleman Glacier. We had only left the car 4 hours ago, but we had already climbed 4 awesome pitches of ice on a warm, sunny day. Does Washington Ice get any better than this?

After our break, we walked around to the right before finding a walk off through the cliffs. Then we started looking for other flows to climb, and there were plenty!

Most of the ice flows are only 10-30 ft tall and relatively low angle. Thus, they get quickly buried in the winter by the legendary Baker snowfall. For us, these little WI2-3 “boulder problems” were great solo practice, almost like a little ice playground.

We just rambled around, climbing whatever looked good. It was an fun change of pace from our normal turbo-charged adventures where we always have a next step or direction. Here, we just followed the ice. Swing, swing, step, step, kick, kick. Rinse and repeat.

Even though ice climbing might appear mundane or repetitive, it does not feel that way to us. The medium itself, the ice, is always changing. Over the day, we climbed brittle, dinner-plating water ice, mushroomed steps, chandeliered curtains, and soft hero ice. Every problem was a little different.

For our final climb, we found a vertical cleft in a drainage where some frozen falls were forming. The middle one looked solid. It was highly textured and mushroomed, making for possibly the most interesting climb of our entire day!

Ever since the massive late September snow dump, I have been struggling to find myself in the mountains. Too much snow to run ridges, not enough to ski. It seemed that nothing was “in” and everything was way harder that it should be. This was the first day in a long time where I felt perfectly in tune with the season and conditions. Easy, accessible, avalanche-free ice is a blessing in Washington, and I am so happy to have gotten some beautiful ice on just the first of November.