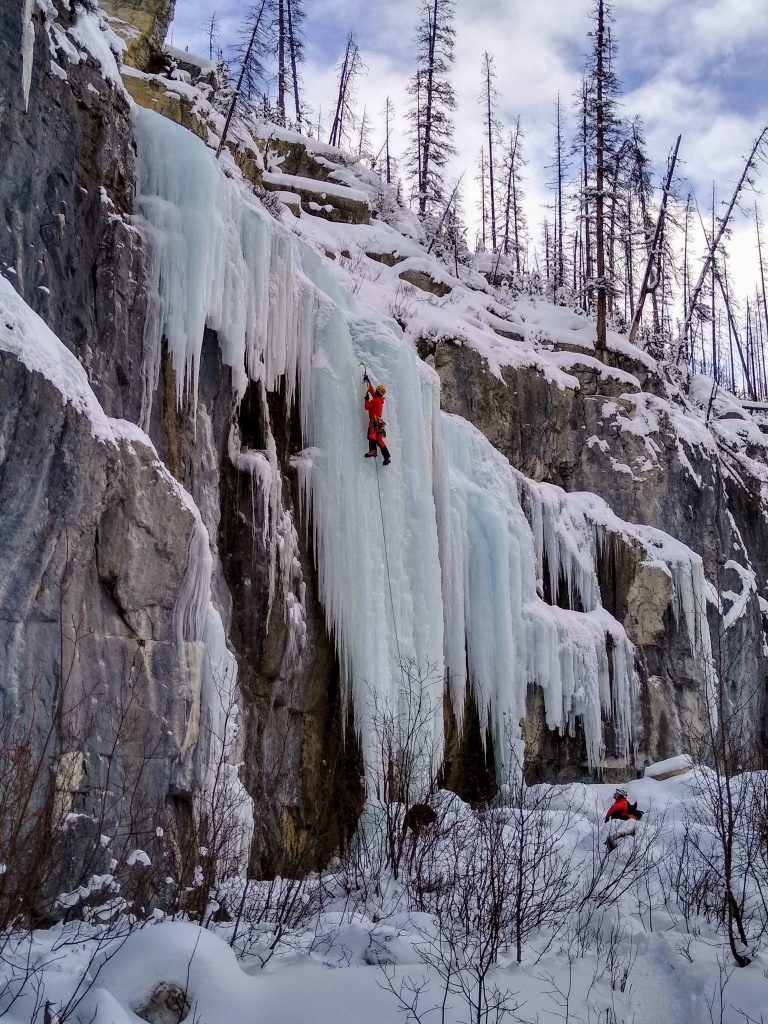 Welcome to the Canadian Rockies

A few weeks ago, a climber from Oregon, Deborah, invited me to go to Canmore for a weekend to ice climb. She knew a guy, Jamie, in Canmore who was free to take us climbing, so we booked transportation and lodging. Winter was slow to arrive in the Cascades, and I figured I could really use some laps on steep ice, so it seemed like a good opportunity. The steep water ice in the crux of Cosley Houston further inspired me to get more practice on steep ice, something that is difficult to do in Washington.

I arrived at the airport Saturday morning and checked in my bags. Right as I was going through security, I got a text from Deborah that she had suddenly gotten norovirus and would not be able to join me! I quickly called Jamie, who I had never met, and told him that I was committed at this point, and would be in Calgary later that afternoon. An adventure of a different type was about to begin!

I stood outside in the cold, continental air outside Calgary and Jamie showed up in his big pickup truck. On the drive to Canmore, we learned about each other and I stared at the rising profiles of the eastern front of the Canadian Rockies.

Canmore is a small cityset in the deep Bow Valley of the eastern Rockies. The mountains tower over the fancy homes and ice smears the cliffs around town. It is as beautiful of a setting for a town as there is. Jamie has been living and climbing here for longer than I have been alive, so he could point out every route and peak. There is nothing like visiting a new place with a local.

For our first day, we decided to visit Haffner Creek, an area in Banff National Park with good short little routes to top rope. The drive in was beautiful, with pink light and clouds on the tops of the peaks. Ice lines streamed down many of the gullies. They were so striking and beautiful.

Haffner Creek begins with an easy 20 minute walk up a creek bed. Suddenly, it enters a narrow slot canyon and the ice becomes visible!

Only the main flow was really “in” for leading, at least at my ability level. There was a guide who led a 15-20m vertical pitch on the right side, and I led a slightly shorter line on the left side. It was steep, but very stepped out.

Two other European guys showed up. One of them happened to be Stas Beskin, a world-famous ice climber. It was fun to watch them tackle some challenging mixed lines.

In addition to lapping our little pitch of ice, we got to top rope some super fun mixed lines! I made it up a super fun, steep mixed line where I had to transition from overhanging rock to a freehanging pillar!

We called it early in the afternoon, not wanting to tire ourselves out for the next day. We still got tons of varied, fun climbing!

On our second day, we ventured out to Bear Spirit, a hidden crag about an hour from the car.

It was another beautiful morning as we entered Banff. The mountains feel so frozen here, yet so naked and barren. Very little snow falls here compared to Cascades, and much of it just gets blown off. The ice lines are like highlighters across the faces.

It was extremely cold at the car, but warmed up dramatically as we ascended a beautiful valley with a bubbling creek.

After walking along the creek for about 30 minutes, we turned left up a smaller drainage. It led to a constriction with a short little ice step. This approach was so cool!

We hiked a little further before reaching a wonderful little amphitheater filled with curtains of ice. It was a marvelous spot, secluded and beautiful.

We walked around to the right and setup a top rope. After that, we just started pounding out laps. The main curtain was vertical for about 20 meters. Sometimes, I would climb 4 or 5 laps in a row. Jamie encouraged me, happy to belay and give me pointers on my technique. I could feel my confidence building with every lap.

To increase the pump, I tried some starts in the corner under some detached pillars. It was extremely overhung, but I could just hook the ice like I was dry tooling, making some challenging, delicate moves! It was so much fun!

Around noon, a solo climber named Michael showed up. We offered that he could just join on our rope and climb with us. He was a nice guy, about the same age as Jamie. Before I knew it, Jamie and Michael had made plans to climb later that week!

We had a relaxing afternoon lapping Bear Spirit, building strength and technique. Then we returned to Canmore for a tasty Schnitzel sandwich!

The following morning, Jamie took me to the airport for an early flight back to Seattle. Over the weekend, we did so much great climbing and I got to see a wonderful part of the world for the first time. Thank you so much to Jamie for being amazingly hospitable to a complete stranger and sharing the gifts of Canmore’s incredible ice climbing!