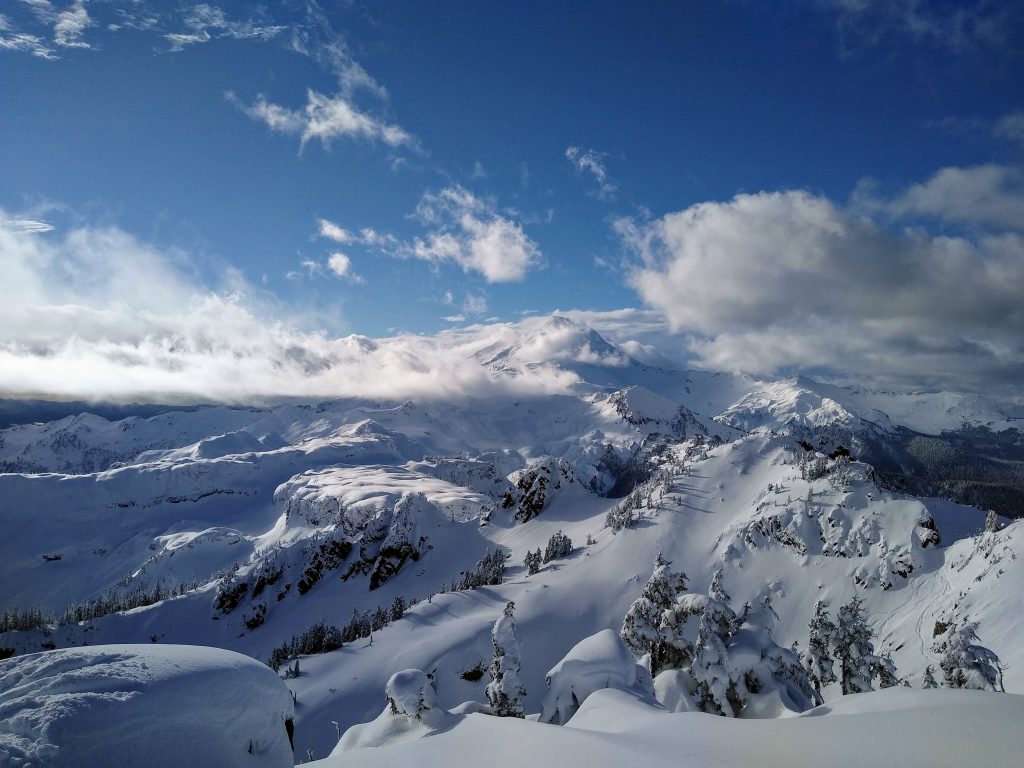 As one drives towards the Baker ski area, Stoneman Couloir catches the eye of even the casual skier. The steep chute beckons from across the valley. Seemingly everyone knows about it, but relatively few actually ski it. So naturally, I thought it would be a good first tour of the season for Jon. The man is up for anything, as long as it involves going down snowy things.

It was nice to finally see a healthy amount of snow as we skinned across the Bagley Lakes in the morning. The weather seemed promising, with patches of blue sky, although the forecast, mostly cloudy, was not.

We made our way up to Mazama Bowl. Jon spent a few minutes cursing the steep kick turns before actually doing them. It was a nice wake up call for the first tour of the season.

The run down Mazama Bowl was quite nice, untracked powder over a firm base. A party of three, also intent on Stonemans, was just ahead of us as we skinned up Entrance Exam towards Mt. Herman. The final bit to the col required a short boot.

The weather kept looking nicer and nicer, and we were treated to beautiful views of Shuksan, Baker Lake, and the surrounding area. Because the sun is always so low in the sky this time of year, the lighting is always beautiful and never too harsh.

We followed the other party, skinning down, traversing and then back up towards the next col. The approach to Stonemans is not too long, but it is relatively complex terrain navigation. Thankfully, we had great stability and visibility all day.

As we reached the eastern summit of Herman, the sun came out in earnest! The combination of wispy clouds, bright sunlight, and fresh snow made for some stunning views. I’m certainly a veteran of the Baker Backcountry views, but they are still beautiful nonetheless.

We watched the other party assess the stability and figure out how to get into the couloir. Wind loading was the primary concern, but we did not feel any wind slabs or weak layers. No cracks or propagation occurred when testing the slopes.

Ultimately, we were able to ski to the east and then cut back left into the actual couloir. One in the couloir, we could see it was actually not very steep, maybe 40 degrees at most, and quite wide. Getting into the couloir was more challenging than actual skiing it!

We hollered in joy as we made beautiful powder turns in Stonemans Couloir. It was one thing to get to ski a classic line like this, but to get a foot of fresh also? Amazing!

At the bottom, there is an exposed cliff, and we scraped by on the skier’s right side. I made some techy jump turns, while Jon just hucked it!

Jon is perhaps both the most stoked and powerful skier I have ever had the joy to ski with. He makes huge, sweeping turns while charging down steep lines. His confidence is an inspiration to me to become a more aggressive skier.

After traversing right, we started skinning up Herman. The wind was really picking up, covering the skin track the other party was setting just minutes ahead of us.

It turns out that party of three had the same idea as us. We followed their skin track to the top of the southern summit of Herman for that run we had spotted earlier.

The run, which was north east facing, provided perhaps the best snow of the day, perfect silky turns.

We took a break and then skinned back up to the shoulder of Herman. A short south facing run brought us back in the vicinity of the Herman Saddle.

Corner Pocket is another classic line on Table. We traversed the long ways to the start of the run. Jon was feeling pretty worked but pushed on.

We dropped in, kicking off a few small wind slabs just a few inches deep. All the wind loading was having an effect on things.

As we neared the bottom of the run, the light became incredibly flat. Jon and I were turned into terrible skiers, unable to see any of the terrain. We were essentially skiing blind. Both of us went off some unforeseen drops and wiped out! We were thankful to get down to the Bagley Lakes. Then it was just the classic skin back to the parking lot…

This day went better than I ever could have hoped for. It was so much fun to ski a beautiful line like Stonemans Couloir in such good snow with an incredibly talented partner. While we agreed that Stonemans might be a little over-hyped, it is still a line worthy of any skilled tourer, and much more accessible than the legend makes it seem. Go get it!