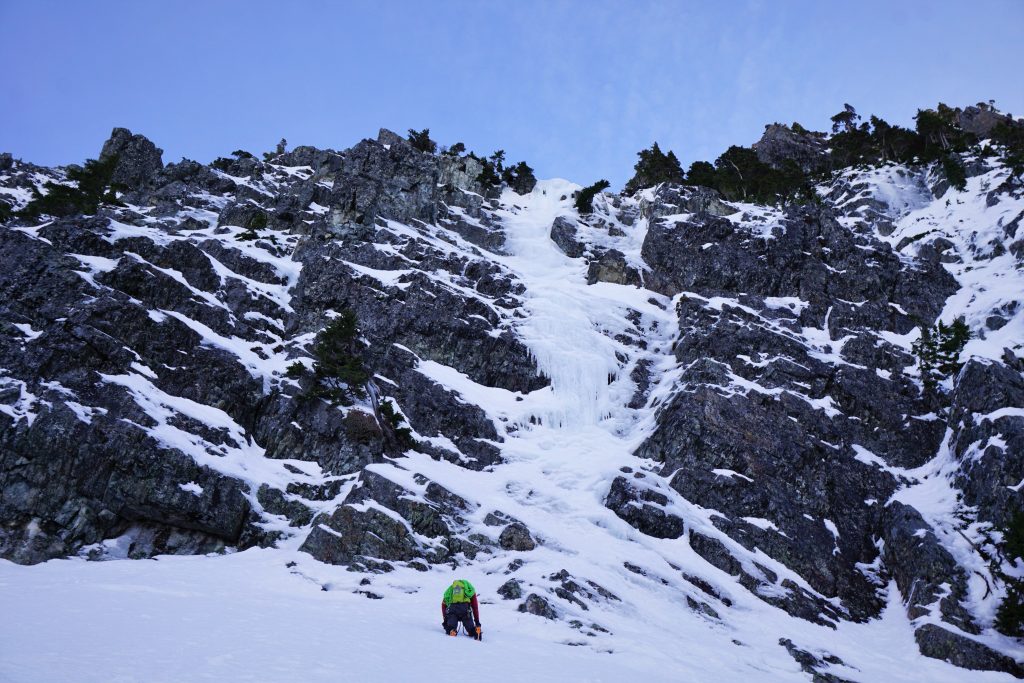 Searching for the Elusive Beast

To climb water ice in Washington is to chase after rainbows – they appear seemingly randomly without warning, although underlying patterns dictate their presence. While we have an abundance of alpine ice, water ice has a deservedly fickle and challenging reputation in the state of Washington. Our mild temperatures and heavy snowpack can make it challenging to find proper conditions for water ice climbing. However, I believe there is much more water ice here in Washington than people generally give it credit for.

I arrived on the scene last winter as a naive, inexperienced ice climber with maybe 10 days under my belt. I was too young to know that, of course, there’s no “good water ice” in Washington under “normal” conditions. I was too inexperienced to know that all the “great climbs” had already been done, and there were only a handful of worthwhile climbs anyways. So naturally, Jacob and I set out on a balmy January day (it hit 50F in Alpental) and made the first ascent of a 4 pitch WI3-4 route on Bryant Peak. The next day, we made the first documented climb in a group of fat flows so dense nothing even in Hyalite Canyon compares to it.

What exactly happened? Many people just dismissed us as “getting lucky”. Maybe we did. But throughout the winter, it just kept happening. Over and over. As we probed deeper into the Snoqualmie Backcountry, we kept finding more and more ice. Not little 50 ft lines like Kiddie Cliff, but big, fat blue ice. Was it just a banner year for ice? Do these lines form regularly? Only time will tell.

I do not claim to be an expert on ice climbing or finding ice (although I am certainly more talented at the latter), but I find it a fascinating discipline nonetheless. Snow and ice have an unmatched ability to transform a mountain landscape. Lines can appear in strange places, creating wonderful routes and weaknesses through big faces. The dedication, resourcefulness, and imagination required to find and climb new lines is such a rewarding experience. Over the last year, I feel like I have learned a few general guidelines in the hunt for ice. One will never be able to “predict” ice formation, but one can put themselves in a place to be lucky by making smart decisions.

You only need two ingredients to form ice climbs: a water source and below freezing temperatures. The interplay between these two variables is what makes predicting ice challenging. Oftentimes, it is cold enough, but there is not a substantial water source. In other situations, the water source is too large, and it does not get cold enough to freeze solid or the ice forms with lots of texture and air bubbles. Instead of analyzing these variables independently, I think it is valuable to look at how they work together in certain types of flows. In general, we have two main categories: high volume and low volume flows.

High volume flows are streams and waterfalls. Examples include Franklin Falls, Alpental Falls, Fuggs Falls at Vantage, and most of the Banks Lake climbs. They require consistently below freezing temperatures to form well. As a general rule of thumb, I usually look for at least 5 days of consistently below freezing, out of the sun temperatures before even really considering these climbs.

One concern with high volume flows is the nature of the ice formed. If temperatures are very cold, the ice can fatten quickly, but will often be heavily chandeliered or cauliflowered due to spray, white from air mixed in, or containing holes with running water beneath. If temperatures are in the single digits or lower, the ice can become very brittle and difficult to climb, but we rarely have that problem here in Washington. All of these factors make the climbing more technical and protection more marginal. You definitely want temperatures well below freezing when attempting these climbs. Watch for “delamination” from the rock beneath. High volume flows usually have a relatively short window each year when they are climbable. These routes falls apart very quickly when temperatures are above freezing.

Low volume flows derive their water either from groundwater (seeps) or snowmelt. Limestone climbing areas like Canmore have magnificent seeps through the rock that form ice daggers in overhung cliffs. In the Cascades, we rely primarily on the mechanism of freeze-thaw of our snowpack, dispensing water down over cliffs, and freezing.

The main things to watch for low volume flows are an adequate water source (early season snowfall) and then diurnal freeze-thaw, where temperatures rise to or slightly above freezing during the day, only to cool well below freezing at night. For this reason, clear weather generally is better for ice formation because there are larger temperature variations. A few weeks of freeze thaw weather can lead to incredibly fat, dense blue ice: great for climbing and protecting. These routes can survive longer in direct sunlight or above freezing temperatures.

The principles of ice formation dictate where we should look for ice depending on the season.

Early season offers an incredible opportunity for high alpine climbs with water ice during certain years. This period usually closes when substantial snow falls at the pass levels, making it challenging to get into the alpine. I love this season because you can still access high trailheads, approach in running shoes, and not worry about avalanche danger.

The winter season here is marked by poor access, heavy snowfall, and avalanche considerations. Ski touring is an essential skill to make the approaches manageable for many of the climbs at this time of year. Because of our marginal temperatures, climbs come in and out multiple times a season. Weather windows are short and infrequent. You really have to be on your “A” game scouting and keeping up to date with conditions, or crowd source beta about which climbs are in.

This season brings longer days, better access and stability, and big alpine routes. While it is t-shirt weather in Index, it can still be ice climbing season on the big north faces. This is the time of year for many large freeze-thaw climbs, such as Triple Couloirs, Watusi Rodeo, Graybeard, and Summit Chief. It is also a good time of year for alpine ice climbs, such as the Ice Cliff Glacier or Baker North Ridge, although these climbs generally have longer seasons. Skis are helpful, although not usually necessary, for access.

A Note on Skills / Styles

Ice climbing is very different depending on the season. The early season requires an ability to climb mixed and thin ice and hike long hours in the dark. In the winter, avalanche danger is a constant threat and skis are nearly a requirement on the approach. The climbing is usually most technical early season and becomes easier as the ice fattens. The nature of these spring alpine ice climbs tend to be long, committing, and relatively easy technically. While in the winter, you might pitch out some vertical water ice, these spring climbs are usually defined by long sections of 60-70 snow, snice, and alpine ice with relatively little protection. Efficiency is paramount. Each season brings its own challenges, and you must adapt your skills accordingly.

Where do I Learn to Ice Climb?

I do admit that learning to climb water ice in Washington is very challenging. One can top rope at the Coleman Seracs or the short, easy, abundant Heliotrope Flows under proper fall conditions. Mixed climbing helps build the strength and movements. However, there is no replacement for visiting a place like Ouray, Hyalite, or Canmore and getting lots of top rope laps. Washington’s climbs tend to be multi pitch, more remote, and not easy to top rope.

How can you hunt for ice while sitting at home? If scoping an established, but seldom-climbed route, look through old Cascade Climbers trip reports or personal blogs. You can find historical weather data, at least for Seattle, and compare it to your current weather patterns to see if conditions might be similar. To get an idea of current ice conditions, scope Instagram, Facebook, and the WTA by geo-location tagging, looking at classic areas like Franklin Falls or the Lake 22 headwall, which can signal ice conditions elsewhere. NWAC has real time temperature and precipitation data for all the ski areas and passes, which is super helpful.

When looking for new routes, I generally use caltopo. Start by looking for areas that have decent road access at the time of year you want to climb. Then look at elevation, aspect, and topography. Adding the slope angle shading layer can help show micro features like gullies and cliffs, which lead to ice formation. The sun exposure layer can help time routes based on solar exposure.

Climbing ice in Washington often involves substantial avalanche danger on both the approach and the climb. Very few climbs lie completely out of avalanche paths, which is part of what makes learning so difficult. Make sure you have proper training so you can assess the safety of a route and approach before putting yourself in harm’s way.

Maybe it is just wishful thinking, but I believe that Washington has much more ice climbing than people give it credit for. It may not be as accessible or predictable as other places, but there are so many unclimbed or rarely climbed lines out there, waiting to be discovered. You cannot expect to be successful on your first few attempts, but I believe it is the challenge, elusiveness, the journey that makes finding ice so rewarding. It takes fitness to explore deep into the wilderness, technical skills to climb the routes, and imagination to dream where the next great line is.

I used to play a lot of basketball. I was a pass first point guard, and my coaches were always encouraging me to take more shots myself. I’d like to borrow a quote from the game, which I believe is applicable to searching for ice:

Ice climbing isn’t rock climbing. One moment it is there, the next it is gone. Despite our best experiences and intuition, we may fail, over and over. Sometimes I feel like Washington Ice is analogous to Schrodinger’s Cat: until we observe its presence (or lack of presence), the ice climb is simultaneously both in condition and out. Too often, we tell ourselves that there is no ice in Washington, and in a way, we are self-prophesizing. We are closing a door before ever opening it. But for the few who believe, the few who are willing to take risks, a lifetime of adventure awaits them.

Sharpen the tools. Ready the ‘pons. The hunt is on.

2 thoughts on “The Hunt For Ice”