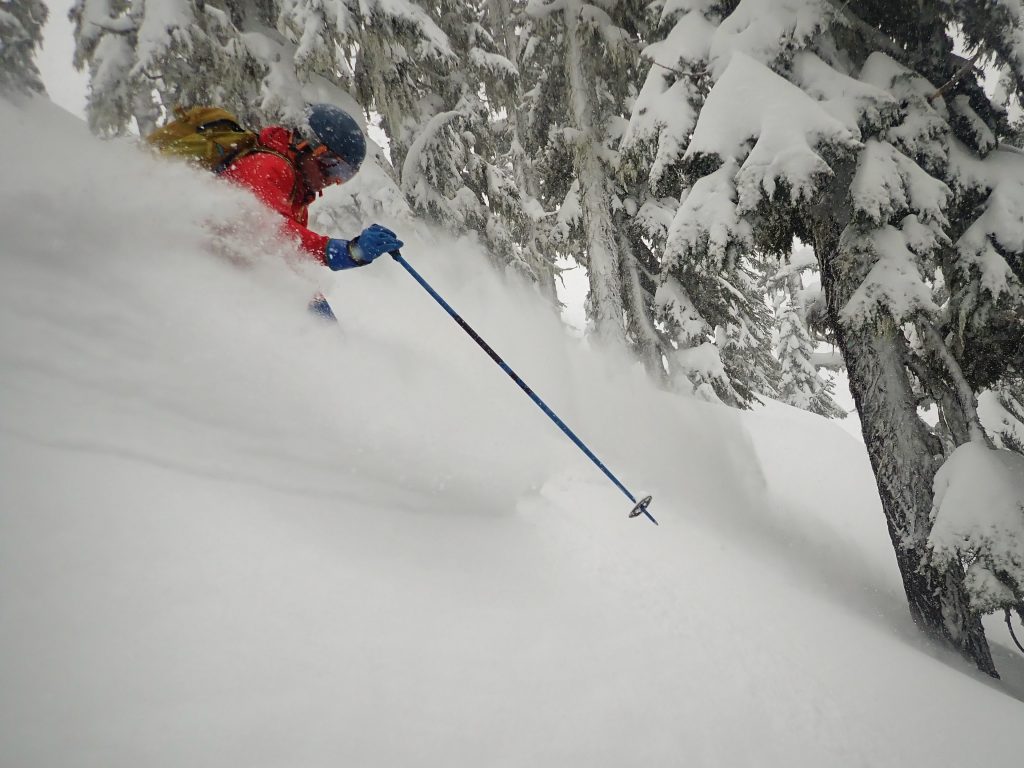 With the long President’s Day weekend, I was having trouble finding a partner to tour with, so my original plan was to go explore some glades south of Hyak. But on Friday night, I was chatting with a guy about beta on accessing North Cascades peaks and decided, what the hell, let’s see if he wants to tour? Steve seemed like a cool, adventurous guy. Our first interaction was back before Thanksgiving weekend, when he asked me if I wanted to do a big high route together. With fresh snow blanketing the Cascades but not enough to ski, it was probably the worst time you could choose, but at least he seemed stoked to explore! Luckily, Steve agreed to ski and so we planned on exploring some at Snoqualmie Pass.

We started up the Phantom skin track, which was, of course, obscenely steep and obliterated by people side slipping down it the day before. Around 4400 ft, we turned off left and contoured towards peak 5350 west of Snoqualmie Mountain. I had skied here a year before and knew that there was nice old growth and some open mellow glades. Now away from the bustle of the phantom, we were breaking trail in a beautiful forest. Skinning through old growth is one of my favorite things.

Steve and I had no shortage of things to talk about, but he admittedly dislikes crowds and thus spends much of his time touring out on the Mountain Loop, seeing no one all day. He was happy to already be away from the crowds so quickly.

The forecast was for winds and half a foot of snow, but the sun was even making a rare appearance, giving views of Snoqualmie Mountain and Alpental across the valley. We skinned to the top of Peak 5350 before taking a south facing run off the summit.

The snow was soft and fast, definitely better than we expected. It had supposedly rained up to 4000 ft the day before, but at 5000, the powder was surprisingly light. This might turn out to be a sleeper day, where Snocrummy Pass defies its reputation.

We skinned back up to the saddle to the west of Peak 5350 and then took one run into the north facing bowl. The light was flat, but I managed to land a significant drop just by guessing the slope angle of the landing. The snow was even better on this aspect.

Next, we skinned up to the saddle south of Avalanche Mountain. The final steep bit required serious excavation and skin shenanigans, but I could tell Steve was no stranger to this. This is the stuff he loves!

We ripped our skins and traversed northwest towards the base of the west slopes of Avalanche. On the map and satellite imagery, Avalanche appeared to be very steep old growth trees with some open shots. At the base, it looked absolutely dreamy.

The sun was in and out, as were the flurries. I love this winter days where you are completely out by yourself, the lighting feels magical, and the snow is perfect.

We followed an old skin track from the day before up through the steep trees on the right side of the face. We lost it eventually in the fresh snow and cut our own to the ridgeline. We were able to stay on the ridge until about 5 ft from the summit, where it was too icy to skin anymore. Maybe a peak bagger would have booted the last bit, but we are not peak baggers.

The top of the west face of Avalanche is impressively steep trees, spaced perfectly like any second/old growth in the area. The snow was so light and fast, and we gave ourselves face shots when we turned hard. On the really steep sections (40-45 degrees), the sluffing was enough that they were small loose dry avalanches that we had to be careful not to get swept in.

Steve told me that he did not have high expectations going into today and he has generally avoided Snoqualmie Pass because he thought it was overcrowded. We were certainly exceeding expectations with primo snow and complete loneliness on this powder mountain.

Each time we skinned back up to the ridge, visibility seemed to briefly improve. We gaze out at the massive north face of Snoqualmie Mountain. It looks so benign from the highway side, but this side of Snoqualmie is a labyrinth of ice, rock, and couloirs. Like so much of the Snoqualmie Pass region, I realize there is so much more than meets the eye. This is a special place, so close to home.

We threw down four laps of Avalanche in total, all with fresh tracks, finding open shots interspersed with the mesmerizing trees. It was some of the best skiing I have done all year, and it came on a day where we didn’t really expect much and didn’t have to drive far.

The convergence zone had reestablished itself as we skinned over towards the Snow Lake Divide and it was dumping snow once again. We encountered an avalanche course of 12 people, and it was the first people we had seen in 6 hours. It never ceases to amaze me how easy it is to get away from the crowds.

It definitely made my weekend more social and enjoyable to meet Steve and shred some pow with him. We jived well and I know we’ll get on some more adventures in the future! In the process, I showed him the quieter side of Snoqualmie and I think I found my new favorite tree skiing spot!