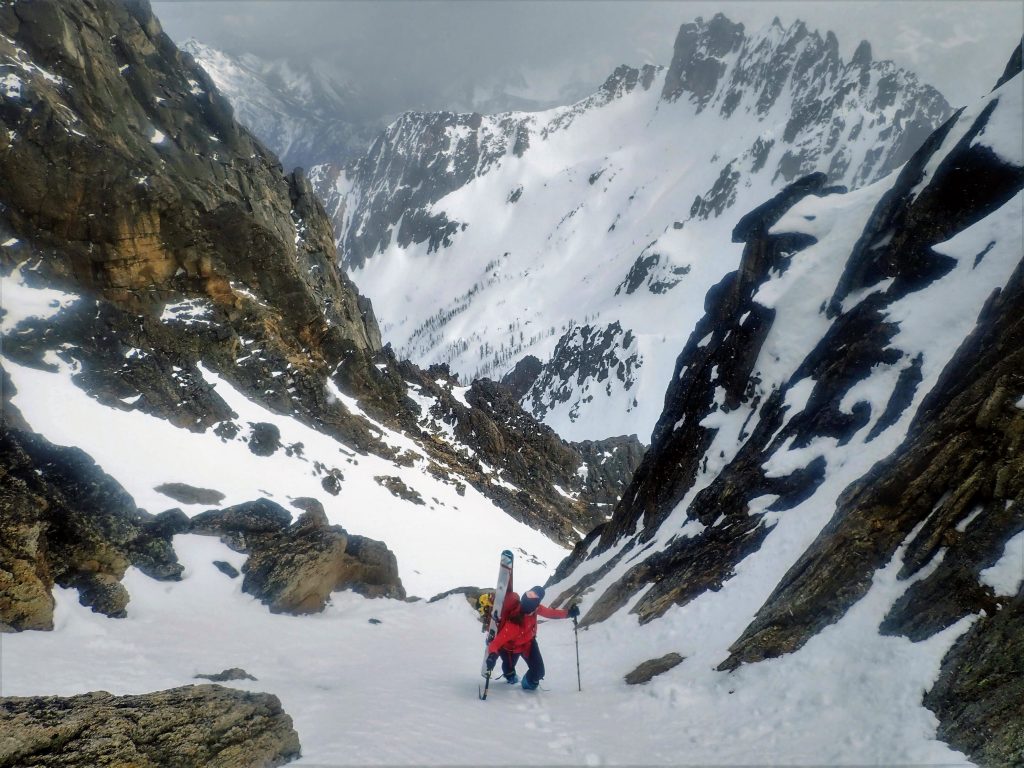 A few months ago, Natalie posted on an ice climbing page that she had just moved to the area and was looking for partners to climb with. I could tell she was a very talented water ice climber and I thought we could make a strong team with our opposite backgrounds. While we did not get out together during ice season, we teamed up over Memorial Day Weekend for some skiing and rock climbing. The objective? A ski traverse of Big Kangaroo, Big Snagtooth, and Silver Star.

I slept at the Silver Star Creek pullout and was rudely reminded that it now gets light before 5 am. Natalie was not planning on meeting me until 7 am, so I lounged around and talked to people. Natalie arrived on time, and we drove up to the hairpin. Just during the car ride, I could tell she was going to be a really fun person.

It was a cold morning, so we began with an easy boot ascent up Big Kangaroo. We learned that we both worked for software companies that specialized in mapping software and grew up just a few miles apart. Natalie had so many crazy life stories to tell from her travels around the world so it was just great to listen. Unfortunately, the pace I set was sometimes too fast for conversation, prompting her to call me “Cardio Kyle”.

The last few hundred feet climbed up a nice couloir, where we put on boot crampons. It would be a nice line to ski, but it was also very aesthetic to ascend.

At the col, we got a wonderful view of Snagtooth Ridge and Silver Star glowing in the morning sun.

There was a bit of fresh snow in places, but the sun had already turned it into hot pow, making for some super grabby turns to start the day. Luckily the terrain is not too steep descending into Willow Creek.

Although Natalie describes herself as a climber who skis, not a skier who climbs, she made some solid turns!

At the base of the cliffs, we started walking uphill towards Snagtooth Ridge. The snow was pretty firm, so Natalie wanted to boot. Only later in the day would I convince her that skinning is more efficient…

We ascended up a tight couloir that was just right of Cedar Tooth (left most visible spire) on Snagtooth Ridge. This couloir was steep, probably 40 degrees and 10-15 ft wide. It would have been a hoot to ski down! We called this one “The Root Canal”.

The last bit of bare scree was garbage, as always at WA Pass.

On the other side, there was a steep 50 ft snow downclimb followed by a traverse. Natalie downclimbed it and I sideslipped on skis. Some more traversing and a little steep skiing brought us to the base of the south couloir of Silver Star.

The clouds had been building all afternoon and precipitation seemed imminent. Soon enough, it began snowing lightly. It seems to have become a Memorial Day tradition to get snowed on in the North Cascades. Usually, I would have been annoyed at the weather, but there was such a calming beauty to the sky as the horizon shrunk, shadows danced, and snowflakes floated in the air.

As we got higher in the south couloir of Silver Star, there was a constriction about two thirds of the way up. We took the left branch. There was one cruxy step that was slightly melted out and a bit of alpine ice had formed over a slab. Luckily, we are climbers, not just skiers, so we dispatched the move quickly with a single ax.

As we trampled up the final snowfields to the Silver Star col, the snow stopped and the clouds began to part. In a way, it felt like the rise and fall of the weather mirrored the story line of the journey. In the end, we were left with beauty.

It was so great to see someone new to the area be so enthralled by the wild mountains and endless views. Natalie’s re-introduction to the North Cascades was an awesome traverse of three high ridges where, from the hairpin to Silver Star, we saw not another soul. Relaxing trips like these remind me how there are an infinite number of adventures packed into even the most tapped out corners of the state, like WA Pass.

After a nice long break, we started down the Silver Star Glacier. The north facing snow was in absolutely perfect condition. We enjoyed 3500 ft of easy, scenic, fast turns to the valley floor. What a way to end the day!

We were able to ski down to 5000 ft at the beginning of the long flat meadow. Here we met some people, including a few groups that had started up Silver Star Creek before Nat had even picked me up. It was fun to chat, but then we were back to marsh walking and bush whacking.

When the trail finally steepens and leaves the upper valley, it becomes easier to follow. I didn’t bother to pack running shoes, so my feet were done with the boots by the time we got back to my car!

This was a really enjoyable point to point traverse with good skiing, good climbing, and wonderful scenery. Natalie was an awesome partner, willing to just go along with my dubious plans. I hope she enjoyed this little nibble of the North Cascades because I know we will be back for more!