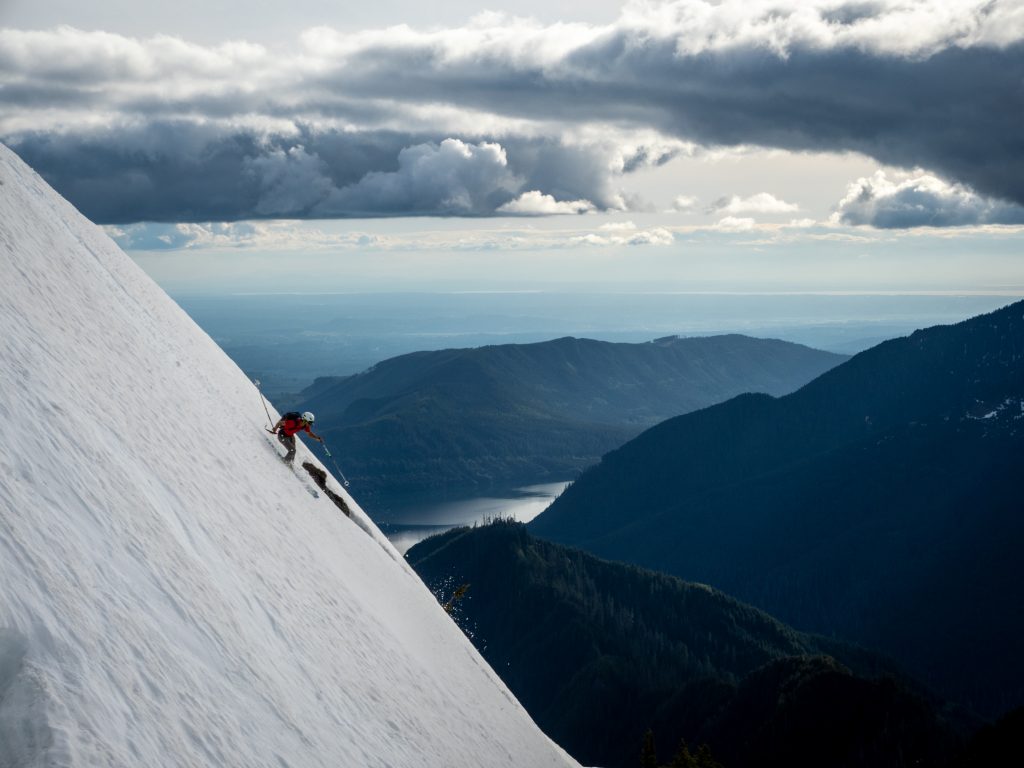 Skiing off into the Sunset

Sometime list winter, I was browsing Caltopo and its new high definition elevation data when a ski line literally jumped off the map to me. Vesper Peak is a popular spring tour, ascending the eastern slabs to the summit. But just to the west, there was an obvious 2000 ft splitter couloir, straight as a ruler. I put it in my back pocket for future exploration.

Late May and June has been a frustrating period for locals. We have an incredible snowpack and gradually improving access, but the weather has been absolute garbage. I cannot remember such a prolonged period in June where it rains every day in the western mountains, but then again, memory has a funny way of filtering these things out. We had grand dreams of some North Cascade adventure, but plans fell apart the day before just as the forecast did. At the last minute, I suggested an evening tour of Vesper to save the vacation day and time a possible weather window.

Steve, Nick, and I left the Vesper trailhead (barely passable with a low clearance vehicle) a little after 3pm and hiked for 30 minutes up to Wirtz Basin. At the moment we entered the basin, we went from dry trail to full snow coverage. Perfect ski transition.

The climb up to Headlee Pass had a nice staircase of steps from all the hikers and skiers earlier in the day. At the pass, we got a view of the traverse and final summit slopes of Vesper. Coverage was fat and continuous. We were very impressed.

After a mushy traverse that got wet snow under our skins (but not under our skin) it was cruiser to the summit. The clouds were lifting all around us, making for dramatic lighting and views into this under appreciated area of the Cascades.

We reached the summit in about 2:20 from the car, leaving plenty of time for couloir exploration! It had been many years since I had been to the top of Vesper. The views down to Copper Lake along the Ragged Edge are so classic.

We descended off to the south to the entrance of our couloir. It looked, as I had expected, pretty low angle and chill. It was very inviting.

There are some couloirs that have you gripped and making jump turns. This one was the complete opposite. We swooped and slashed down the natural half pipe in playful corn snow. Yeah, it was not some intense line, but the stunning setting, gazing out to Spada Lake, the skyline of downtown Seattle, and the sunlight reflecting off the Sound made it a truly inspiring run. It was definitely one of the most scenic runs of my young ski career. It felt like skiing off into the sunset.

We stopped around 4800 ft or so because there were open holes and running water beneath us. The couloir steepened here and could provide good skiing to 4000 ft earlier in the season.

We booted back up most of the way and then dropped in again, this time off a steeper entrance on the side of the couloir. Steve captured some money shots skiing high above the sound. All alone, yet in sight of millions.

Back at the Vesper saddle, the clouds had lifted even further and backlit the Monte Cristo Peaks, Sloan, and even a peek of Glacier Peak.

After the disappointment of poor weather foiling our bigger plans, I felt so grateful for this evening. Moreover, I felt grateful to live so close to such wild places and to have a career that allows me the flexibility to dart out into a different world, even if just for a few hours.

The big face on Vesper was fast and fun. The snow was just starting to refreeze, but had not quite gotten to a zipper crust.

Down at the pass, we actually crossed a slightly lower pass just skier’s/climber’s left of Headlee Pass. This put us into a wonderful little couloir which had far fewer rocks and avy debris.

Wirtz Basin had all kinds of fun ramps and jumps, making for a playful ski all the way back to our shoes. Spring in the Cascades, perfectly played, even if just for an evening.