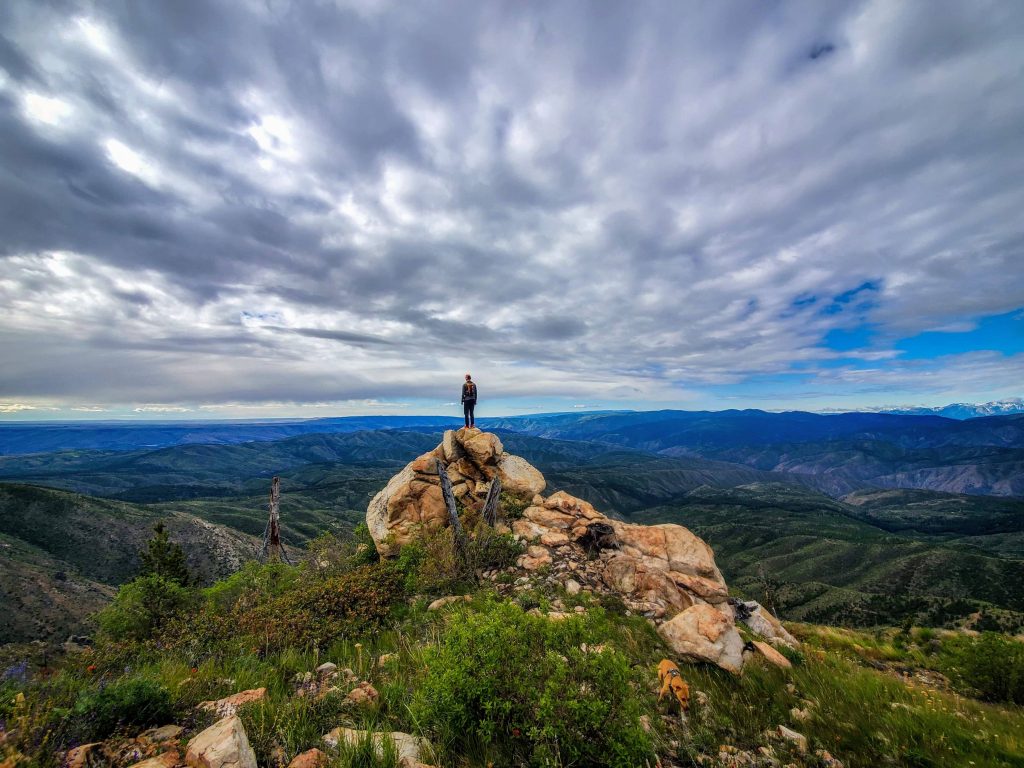 From Sagebrush to a Snowy Hush

In an attempt to escape the cursed weekend weather during Junuary 2020, Steve, his dog Bug, and I headed to the Eastside of the Cascades. After a gravel ride in the Chumstick Region Saturday afternoon, we drove out to the Entiat River Valley, one of the great mountain valleys of Washington. I had only been up this valley once before, climbing Cardinal, Saska, and Emerald Peaks over Memorial Day 2017. That was so long ago that this time it felt like I was driving up the valley for the first time again. Just when the Cascades get old, we forget and rediscover, sometimes in a different light. Back then, I was peakbagging, chasing Bulgers. Now I’m running ridges, chasing aesthetics.

We woke up to the sounds of a rushing river deep below us in the Box Canyon. It was cool in the deep valley, 5000 ft below the peaks above us. We dropped a car off at the Lake Creek Trail and drove back out of the mountains. We turned up Potato Creek Road and continued for a few miles until the road, parking at an abandoned road around 3000 ft.

Our vague plan was to follow an old abandoned road just west of Potato Creek up towards Baldy Mountain. The road was nicely grown in, but not schwacky. The desert flowers were in full bloom. From the start, we had great views of the lower Entiat Valley, the Columbia River, and the Enchantments. It felt so weird to be starting a mountain run in the high desert sagebrush canyons of Eastern Washington.

As we gained elevation, the terrain became more forested. It reminded me a lot of high desert terrain in Eastern Tahoe. For Steve, it was like Northern Arizona. Somehow, the Cascades pack a bit of everywhere into one range.

We rejoined the maintained road as we ran around the east side of Baldy Mountain. This gave us views down to Lake Chelan.

As we neared the next pass, a soft wind brought in waves of bacon. We detoured and found a group cooking breakfast. They were overlanding from the Entiat to 25 mile creek on Chelan. We acted extra friendly, but unfortunately they did not offer any bacon.

We continued on the road until reaching the trail that would lead us up Stormy Mountain. Here we passed an older couple in their 70s coming down.

At nearly 7200 ft, Stormy Mountain was our high point for the trip. We had great views of Chelan, the southern Chelan Sawtooth, and Tyee Ridge to the west, but the great snowy peaks to the north remained mostly hidden in clouds. We watched squalls drift across the ridges to the north. Maybe we would not escape the rain after all.

The mountains here are much less featured than the jagged peaks of the Enchantments or tumbling glaciers of the North Cascades. Really, they are just elevated hills. Some might call them monotonous, but they also give the illusion of being infinite. One of us, not much different than the others.

The trail down the north side of Stormy had some bits of snow, but unfortunately no running water. All of these trails are bike trails, so the ruts can be deep at times, but they are generally well built and nice for jogging.

We followed the ridgeline over a few more bumps through open meadows and grasslands. Travel is so fast and efficient here compared to most of the Cascades.

As we approached Devil’s Backbone itself, the skies continued to darken. Squalls were surrounded us. Combined with the dark, chossy cliffs of Devil’s Backbone, the weather created a very Mordor-like ambience.

The trail goes way down and to the east to avoid all the cliffs of Devil’s Backbone. That seemed rather unattractive to us, so we spied a possible gully on the left side. A short traverse led us into a loose class 2 gully. The main challenge was avoiding falling rocks caused by Bug, who would zoom ahead and kick rocks down on us. Someone needs to teach him group management in consequential terrain.

When the gully ended, we crossed left into another gully which took us to the summit. The summit itself has no real views through the trees, unlike most of the rest of the run.

As we began the climb up to Angle Peak, it began to snow in earnest. The air temperature felt rather mild, but the snow was very much snow, not slush or rain.

The climb up to Angle Peak crosses some dramatic ridgelines with a tad bit of exposure. There were some lingering snow patches on the east side, but nothing troubling. As our visibility decreased, the ridgeline felt more and more wild.

By the time we reached the highpoint of Fourmile Ridge, we were in a full on snow storm. The trail had a lot of loose rocks here. On the highest and most northern aspects, there were actually a few green larches.

Eventually, we crossed Fourmile Ridge at our last high pass of the day. We took one last break before continuing down.

We sat on some nice granite rocks and watched snowflakes fall gently into an eastern forest. In a way, it felt like late October, witnessing the first snowfall of winter. Rather, it was just the first long run of a hopefully productive alpine running season. Lately, it has felt like the seasons fly by so quickly. The end of one season marks the beginning of another. I find myself fighting to get in one more ski day, one more run, then one more ice climb. But in moments like these, I’m somehow able to let go of all of that and just accept what the mountains give us. Would have I preferred a splitter weekend for North Cascade ski mountaineering? Sure. But this was special in a way that I never expected, and I’m grateful for that.

Just below the pass, we met a solo biker pushing his way up through the snow. Right after that, we found abundant springs, the first water in 20 miles. The water was so abundant that the trail was swamped in places. Bug eagerly drank, well deserved.

As we continued down the Lake Creek Trail, the sun started to come out. As promised by the weather man, we technically did not get rained on all day.

The only downside of biker trails is the incessant ups and downs that they love to create. Otherwise, it was a cruiser 5000 ft descent over 8 miles from the ridge.

Overall, Steve and I had a great time on this run. The diversity of scenery was impressive. It felt unique to start in sagebrush canyonland and end in the wild, green Cascades. While this might not be my first choice on a summer weekend, it was certainly making the most of another dismal June weekend.