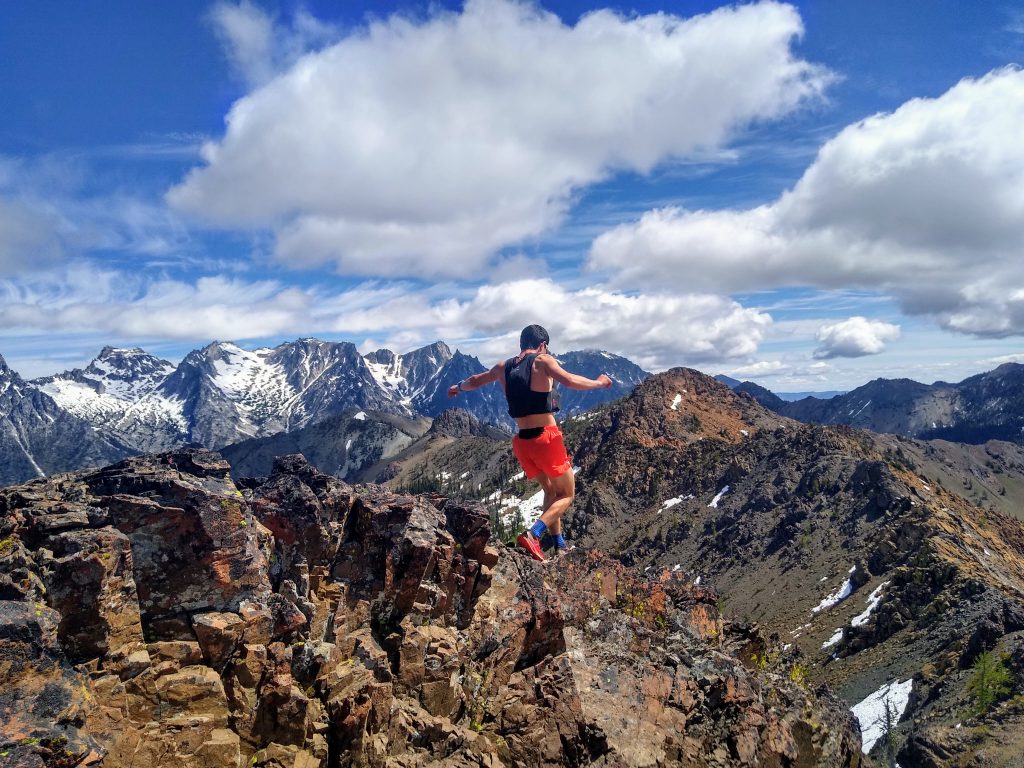 Note: A week after this trip, Matt Bunker tragically died while skiing Liberty Ridge on Mt. Rainier. He was a kind soul with infectious positivity. To learn more about him, please read this Seattle Times article. This post is dedicated to him.

On the summer solstice, Steve, Peter, Matt and I joined for some ridge running in the Teanaway. Four years ago, Gavin, Blake and I did six peaks from Iron to Bean, finding enjoyable scrambling and surprising solitude. But I knew I had unfinished business, as we had bailed before Earl. Now it finally felt like the time was ripe to return.

Our plan was to traverse the ridgeline from Iron Peak to Miller Peak, a distance of almost 15 miles. We left a car at the Miller Bear Trailhead and drove over to the Iron Peak Trailhead. After some introductions, we were off.

The northern ridge of Iron Peak is long and flat. It is a nice introduction to the ridges in the area, with great views south to Rainier and north to the Stuart Range. From the summit, Navaho Peak looks so far away, and we knew that Miller was beyond that. Traverses always seem so daunting to start, but that’s part of the allure.

We hit the summit about an hour in and then reversed course towards Teanaway Peak. Teanaway Peak is a bit steeper, but the scrambling is solid and fun.

The descent off Teanaway towards Bills Peak is not obvious, but I faintly remembered trending left and then back right into a snowy gully. My memory was spot on and we found a perfect SE facing gully for some morning boot skiing. For some of us, it was the first boot ski of the season, so there were plenty of wipeouts.

We continued down to the saddle and then back up the sharp ridge on Bills Peak. The scrambling up this ridge felt quite exposed, but the moves were never over class 3. It seems surprising that the standard route climbs the other side when this ridge is so much better.

Getting off Bills is a mix of fun and pain. Up high, there’s really good sections of boot skiing, but the lower part is annoying rocks and scree.

Down at the Marys/Bills saddle, we filled up on running water and continued up the long, gentle ridge to the summit of Marys.

I remembered the long traverse from Marys to Bean as the mental and technical crux of the route. The ridge starts off pretty mellow but gradually becomes more knife edged. The rock also transitions from acceptable to downright bomber. It’s the same sticky, red rock as Ingalls Peak, a true joy for scrambling.

I struggled to keep up with the other guys. I’m still having trust issues with rock/ice since my fall on Sloan, so it slows me down in terrain like this where I feel the need to double check every hold before committing to a move. I can visualize everything that could go wrong. I am very much a fearful, not fearless, climber now. But in the end, it probably makes me a safer climber.

Last time, we traversed about 50-100 ft below the crest of the ridge on the right side, keeping it at class 3. Going directly over the top required a little class 4-5, but was well worth it. The scrambling was as about as good as it gets!

I only convinced Peter to journey over from the Olympic Peninsula for this day by promising beautiful ridge running. His movement on this sort of terrain is certainly a thing of beauty: so fast, so fluid, so delicate. If there’s a Washington version of Kilian Jornet, it is Peter.

We converged on the summit of Bean just as many other parties from all directions were. It seems like Bean is a popular scramble, for good reason. There was even a group with some ropes and a combined $5k of La Sportiva Nepals.

We dropped off Bean and headed over to Earl. This is where we bailed last time, but I felt much stronger four years later. It is amazing how something that felt so big in the past now can feel just like a morning warmup.

At the summit of Earl, we gazed across to Navaho and all the way to Miller. Here, we had a choice of following the ridgeline proper or descending into the bowl to the east and cutting over to Navaho Pass. We were enticed by the prospective boot skiing and abundant running water and decided to cut across.

The traverse over to Navaho Pass involved varied terrain, with sections of marsh, meadows, and slabby rock. It was a nice change of pace and the eastside flowers were abundant. There were more ups and downs than we expected, but it was still probably faster than taking the ridge proper. Just before Navaho Pass, we passed our last running water until after Miller Peak.

The climb up to Navaho Peak was remarkably steep for a Teanaway area trail – possibly steeper than most of the scrambling we had done. Here, we finally encountered the Seattle masses. I was grateful to have poles in the dusty ground.

The descent down Navaho towards Freedom was by far the best descent of the day. On the eastern aspect, there was a perfect little flat snow ridge lingering. We flew down the snow, running and skiing.

As we gazed out towards Miller Peak, mountains turned to hills, and meadows turned to sagebrush canyons. White, orange, black, gray, blue, and green blended together in a sort of visual cacophony. Sometimes, I think what I am really searching for in the mountains are moments like these, when our movements are so in tune with the land that they feel effortless.

From Freedom, Miller was still a long ways away. Caltopo shows an old trail, but we never really found one, just faint remains. The scenery really transitioned as we left the alpine and entered the grassy hillsides of Eastern Washington.

The traverse to Miller felt like it went on and on and we all were, with the exception of Steve, who was once again riding an enormous runner’s high, starting to get a bit tired. When we heard the roar of motor bikes, we knew we were close.

Matt briefly called his dad for Father’s Day at the summit and then we cruised down to the car. After so much off trail terrain, it was nice to be back on a well maintained trail. After all, we weren’t wearing short shorts for nothing.

It was hot down in the valley, and we celebrated appropriately with a cold dip in the North Fork Teanaway. To me, this was the summer solstice done right. Thanks Matt, Steve, and Peter for another great day in the hills.

4 thoughts on “The Teanaway Traverse”