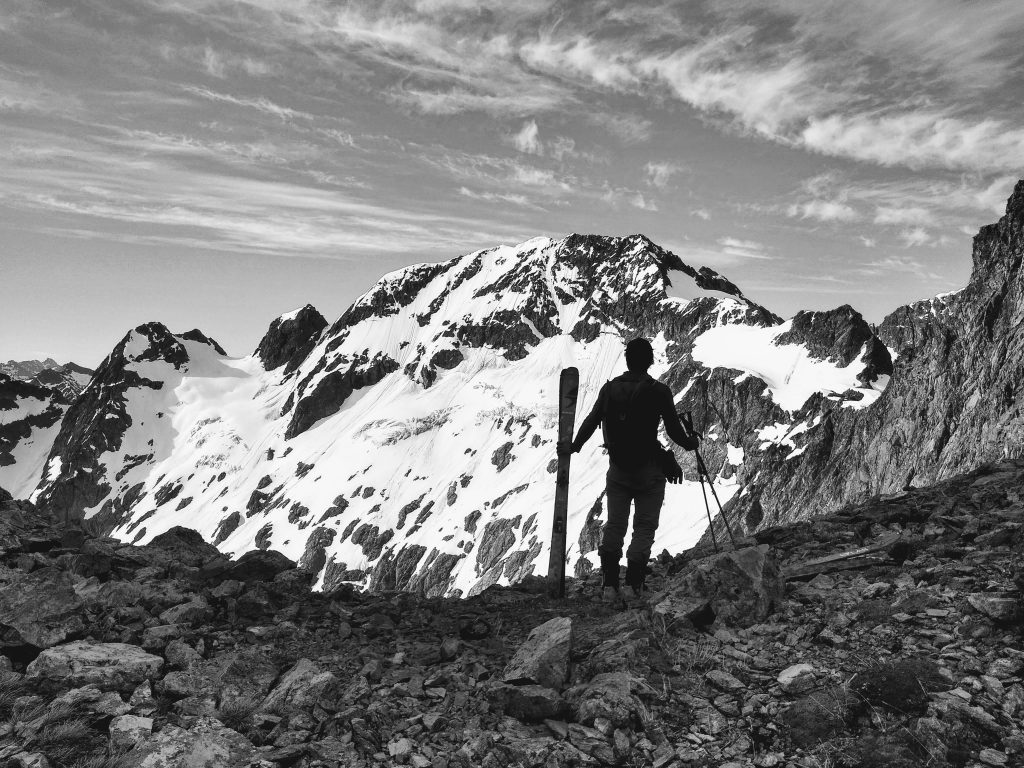 Summer Skiing, at its Finest

The Magic S Loop is a ski route we have been drooling over all June. First done in June 2007 by the legendary Sky Sjue and Dan Helmstader, it seemed like it had all the makings of a classic: easy access, incredible position, four fall line descents. Yet there are relatively few trip reports of this loop. What was the catch? June 2020 weekend weather has been historically bad, so when a mid week window finally arrived, Nick and I went for it.

The Cascade River Road was gated at mile 21, two miles before the trailhead, so we departed with bikes at 4 am. It was very warm and we knew no refreeze was occurring, so we wanted to start as early as possible. I quickly discovered how difficult biking uphill with a heavy pack and poor gearing is. My legs were on fire within minutes and I was out of breath. Biking is hard! So I ended up pushing the bike most of the way to the trailhead, which gained about 1200 ft over 2 miles.

There was only one lingering snow finger blocking the road right before the trailhead, which could have been excavated in about 20 minutes with a shovel. But of course North Cascades National Park has to keep the road gated. The bathrooms, on the other hand, were open. The trailhead bathrooms are notoriously the nicest pit toilets you will ever use. It seems that 80% of the NCNP budget is spent on these bathrooms, and the other 20% is spent on the solar pit toilets up at Sahale Glacier Camp.

Snow coverage directly up the gut towards Cascade Pass looked good, so we passed the picnic tables and dove into the alder, following a faint animal trail. When we hit a stream, we tunneled uphill until we opened up to the snowfields. It was only about 15 minutes of schwacking, but it was pretty bad. In hindsight, if we had crossed the river from the highest switchback on the road, we might have reached a lower snow finger on the other side of the river with no schwacking.

There are a bunch of ways out of the lower basin, but most seemed like they crossed above sketchy snow bridges. Going directly forward, we found a hidden snow finger around a corner that connected us to the upper part of the basin. It looked like it would probably only hang in for another few days.

We entered the sun shortly after reaching Cascade Pass. We briefly considered skiing down into Pelton Basin and then booting 2000 ft directly up to Cache Col, but decided that the higher traverse would already be soft and would save elevation.

With the suncups, the skinning was annoying so we eventually just started to boot. The snow was very supportive. At this point, in early summer, the snow seems to be perpetually be just, kind of soft slush. Never breakable, never mank, occassionally icy, but always manageable.

A cornice forced us to climb to a little knoll and make a little descent onto the Cache Glacier. It was high elevation and east facing, but at 6 am, the snow was already grabby. We were not expecting great snow conditions, but it was a little disappointing.

Booting up to Cache Col, we kept to the left side because there was a massive cornice not just at the col, but also on the rocky knob to the right.

At Cache Col, we were stricken with horror to see that the snow blob was not even really attached to the rock! If we had known that, we would have given it even more berth. It is going to drop soon, and that will be bad for anyone on the Cache Glacier…

On the other side of Cache Col, we got incredible views of Hurry Up Peak, Mt. Formidable, and the Middle Cascade Glacier. Both Nick and I did the Ptarmigan Traverse in early July last year, which had terrible weather, so we had never seen this view before.

On this shaded western aspect, the snow was much better and we enjoyed fast turns down to Kool Aid Lake. Then we began the easy skin up to Art’s Knoll. It was still early in the day, but our position already felt remote. In the shade of North Cascade giants, everything felt so still and calm.

At the Art’s Knoll Col, the view took our breath away. It was like walking into a cathedral in the presence of a king. The massive north face of Spider Mountain was perfectly framed and basking in the sun. It is such an intimidating face, and we can see why it has enticed steep skiers for generations.

We wanted to linger, but the sun was moving, and so were we. We glided over to the base of the Plan B Couloir, a marvelous little line that is the key to this entire tour, giving access to the upper flanks of Hurry Up Peak.

The couloir was steep and narrow for the top 500 ft or so. At its steepest and narrowest, it was about 45+ degrees and 20 ft wide. The snow felt very nice and consolidated on this southern aspect. We agreed that it would be criminal to boot up this couloir and not take at least one lap down.

At the top, we transitioned on a flat snowfield and then entered back down into the couloir. The snow was pretty damn good for early summer, making for easy turns down an intimidating line. The couloir was just getting its first sun of the day, so the snow was supportive and soft.

We stopped where the couloir started to fan out and booted back up. Unfortunately, we had mostly filled in our bootpack during the ski down.

Up top, a gentle skin led us to the lofty summit of Hurry Up Peak.

Even though its summit elevation is rather moderate, the view from Hurry Up is as good as any in the Cascades. Positioned on the crest between the wild peaks of the Ptarmigan Traverse and the icy giants up north, there is a sense of infinity to the range. The more I ski, the more doors are opened, and the possibilities truly do seem, at times, infinite.

The name “Hurry Up” felt so ironic, because the entire day felt so relaxed and chill. This was likely my last ski day of the season, and I wanted to savior it. For years now, it has been a goal to ski the terrain around the Cascade River Road. No area captivates me as much in the spring months. After the Pearl Necklace Tour, the Isolation Traverse, and now the Magic S Loop, I have skied over 40,000 ft in this stunning area this spring. Goal achieved.

I ski cut the whole slope a few times and watched surprisingly big wet slides rip down the face, roaring over cliffs a thousand feet below. All of the June snowfall has created some unusually reactive layers for this time of year. After the slope was flushed, the bed surface skied very nicely.

There were only a few small cracks open, which were easy to avoid. At the bench between the upper and lower sections of the glacier, we searched for a way through the cliff bands. If you trend slightly skier’s right, then back down skier’s left, there is a perfect connecting couloir that gets you through the otherwise problematic rock slabs.

We zipped across some extremely rocky snow and across to the far side of the runout. It is important to move fast here, because just 20 minutes after we skied across, we watched some large seracs tumble across our tracks.

We filled up on running water and started skinning up to Alliteration Col, which sits between Magic Mountain and Pelton Peak.

It was nice to finally be out of spicy terrain at Alliteration Col. We were on the home stretch. As much as we wanted to linger, gravity and the sweet taste of summer corn were pulling us downwards.

The snow here was easily the best of the day. After a steep couloir and a massive face, we got to wrap it up with a 2000 ft party ski down beautiful, beautiful slopes. Pure magic.

Pelton Basin still had great snow coverage and so we began the long, gentle climb back to Cascade Pass. I had gazed down into Pelton many times in the past, but it was nice to finally experience the basin, gazing up 4000 ft to rocky summits, watching waterfalls pour down over cliffs.

At Cascade Pass, we set goodbye to this sacred place. Or at least, until next season. In the coming weeks, the mountains will transform, and soon it will be the season of sky running, wildflowers, and alpine ridges.

We were able to ski continuously, with a short section of alder skiing (ala Doug) all the way back to our approach shoes.

Back at the pass, we took another visit to the lovely bathrooms and then hopped on our bikes and sailed back to our cars. We arrived just before 2 pm, about 10 hours after we started in the morning.

So what is the catch on the Magic S Loop? Well, we didn’t really find one. It is an amazing ski trip, possibly my favorite ski tour (as opposed to multi day, or point to point traverse) ever! There are four (or five) quality ski descents, access is relatively easy, and the scenery is about what you would expect for the North Cascades. I think this one might become an annual June tradition.

One thought on “The Magic S Loop”

Autumn of wonder.
Over the weekend @wyatt.mullen and I completed the Fisher Outpost High Route in the North Cascades. This is an incredibly rugged route that has larches, meadows, and giant glaciated peaks. Here are a few of my favorite pics.
A day in the life, of a life in color. Fall has arrived in the North Cascades!!!!
The pursuit of alpenglow, successful once again.
I'm the kind of person who plans out details and uses all the tools to research before heading out. It removes a lot of the risk, but also the adventure. So it was refreshing to meet @wyatt.mullen for the first time, have him point at a mysterious ridge, and just go for the send. It culminated with this airy knife edge, incredibly positioned over the Washington pass environment. Thankfully, it went.
Roll out the red carpet... Early fall in the mountains is one of my favorite times of the year. The big snow could come at any point, entering the purgatory of late fall. But currently the forecast looks promising. I'm excited to go after a route I have been saving for a few years for just the right moment. Where are you headed this fall?