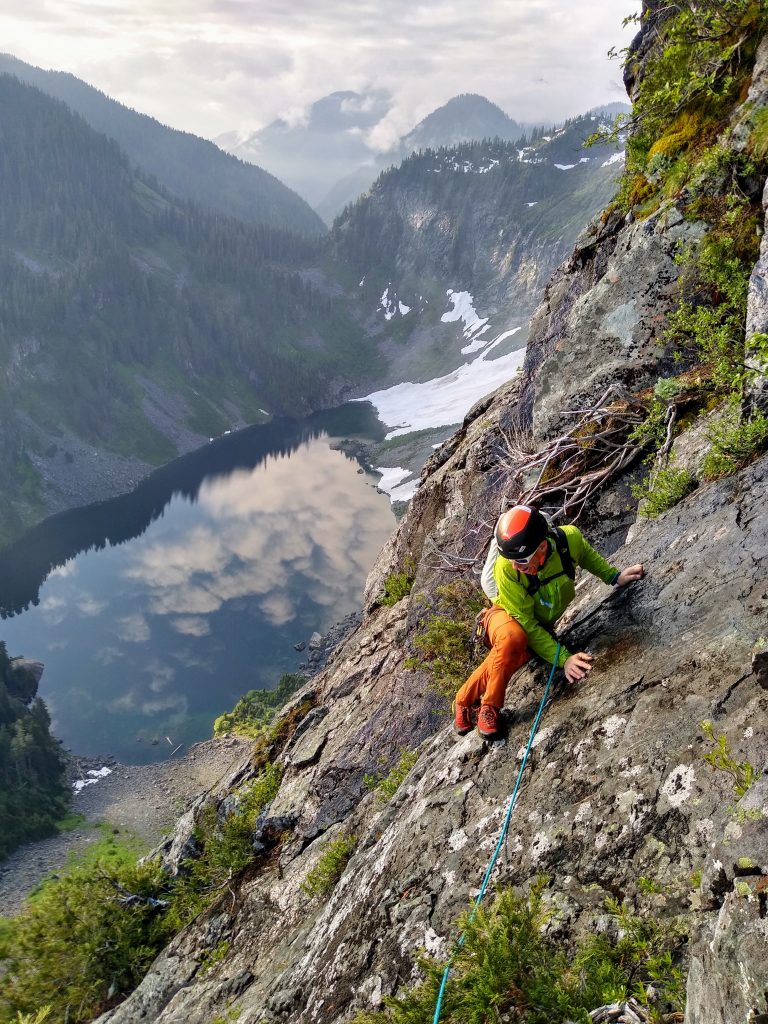 For as long as I can remember, I have stared up at the rugged Index Massif above Highway 2, scared and mesmerized by its vertical cliffs and sheer relief. It is the steepest mountain in the state. Combined with a low elevation and high rainfall, you have the recipe for the most rugged peak in the entire state, if not the country.

Three years ago, Logan and I climbed the Hourglass Gully up the main peak of Index. It was a full on Cascadian adventure that we thoroughly enjoyed. This planted the seed for the full Index Traverse, a traverse from North to South over the three summits of Index. Few people ever do it, and it is notorious for vertical brush, difficult route finding, committing rappels, and adventurous climbing. I mentioned it to Doug in the spring and he said he was interested. We chose the Fourth of July weekend as our plan.

June was wetter than April and July has showed no promise of improving. Still, after many straight days of rain, it appeared we might have a window over the weekend. Of course, the weather forecast went downhill and we scrapped the bivy plan and decided for a massive single day push on Sunday. We had heard of at least one report of the traverse car to car, so it was possible, right?

After a few hours of sleeping amongst fireworks, we left the Lake Serene trailhead at 1:30am. I felt groggy in the early morning, like I always do in the dark. At the lake, we continued up talus beneath the impressive east face of North Index. The Norweigan Buttresses loomed in the darkness.

We reached the brushy base of the North Face at first light and started climbing up steepening mossy slabs and brush. Eventually, we decided to put on our harnesses, but there was hardly a flat spot big enough to even do that.

The first few hundred feet climbed up 3rd and 4th class slabs on generally solid rock. However, the holds were downsloping and many sections were sopping wet. This turned what should have been easy, enjoyable climbing into slow, stressful scrambling. We were already hundreds of feet up in the air and fall would be very bad.

After a few hundred feet, we reached a vertical wall with a two piece piton anchor at the base. We followed the Beckey description and started roped climbing up and left. Again, the moves were easy, but wet moss is not exactly confidence inspiring for the feet, especially with no real protection. Doug led us around a wildly exposed corner and then back up to a block with tat. This section of the route felt so improbable, bypassing the cliffs to the right while 1000 ft of air dropped below our feet down to Lake Serene. The crux move was, of course, wet. This wild section was definitely the highlight of the entire climb.

We were carefully following Beckey’s route description. At the block, I led out right across a downward sloping ramp. We figured this must be the “hidden ledge”, but it was more like a ramp system. I crossed more sketchy wet slabs that should have been trivial and belayed Doug from a thick root.

At this point, we were feeling pretty doubtful, but we pressed upwards. We started simuling through a surprisingly steep and challenging brush tunnel. Most of it was not too bad, but every 50 feet or so, there was a legitimate vertical 10-20 foot step that involved feet slipping in mud or moss and desperate pulling on tiny shrubberies for holds. The best pro was the frequent rap station littered with a pride-parade array of old slings. It was intensely physical and slightly scary. At one section I was flummoxed before finally heel hooking a mossy crack and yarding on some alder. It was totally exhausting and muggy in the brush tunnel. I don’t know how you grade these things, so I guess that is how the North Face has ended up with a sandbagged 5.6. I’d call it BW4 R. Beckey even calls for “imitating a gorilla” in his beta. In a sort of sadistic, masochistic way, it was comedic.

Eventually, we entered the famed “North Bowl” or “Great Bowl”. Doug and I felt like it should be more appropriately name the “Bullshit Brush Bowl”.

We religiously followed the Beckey description and continued up the left gully. Unfortunately, it was also dripping water and some sketchy slab moves forced Doug upwards towards a big tree to give me a solid belay. The last 20 ft were, in Doug’s words, “harder than any of the 5.11 pitches at Nevermind Wall”.

From the tree, Doug led a deceptively difficult bitch up and left that rejoined with the Beckey route up to another rap station. There were some very insecure, runout moves where you had to completely trust the thinnest of shrubberies. I guess I learned that these little bushes in thin soil are stronger than I think, but it still was not confidence inspiring. I was thankful to have Doug belaying me up, but it’s not exactly like he was thrilled with the climbing either.

We were both feeling pretty worked after being in no-fall, wet, jungly terrain for many hours. Progress was slow, and we knew the traverse was out of question. It seemed like we were perfectly on route given signs of traffic, matching beta, and all the rap stations, but the climbing was still just so awful!

Doug started up one more pitch through increasingly rotten and run out rock. As moves started to approach 5.5-5.6, we discussed and he decided to down climb back to safety. We looked at other options but everything just felt too sketchy to be worth continuing. Luckily, we were at a rap station, so we made a single rope rappel and then double rope rappel off the tree back to the base of the North Bowl.

I read one trip report that used a variation, doing an “unroped scramble” across the North Bowl, intersecting the North Rib lower down. They made it sound completely casual. We decided to give that a shot. The start of the traverse was easy enough on little ledges, but then more cliffs and steep brush forced us upwards, trying to find a way across.

Once again, we slowly got forced upwards into increasingly uncomfortable and exposed terrain with no good prospects forward. We were both done with this bullshit and in mutual agreement to call it quits and just get down safely. On queue, clouds moved in and visibility dropped to 30 ft. There were surprisingly no rap stations on this side of the bowl and we had to sling a block and make a traversing rappel back down to the base of the bowl once again.

There comes a point where a climb is simply not worth the risk. Especially after my fall on Sloan Peak, a friend getting helicoptered off Mesachie Peak, and now the tragic death of Matthew Bunker a week earlier on Liberty Ridge (just a week after we ran the Teanaway Traverse together), I have been extra conscious of my own mortality and the consequences of mistakes in alpine terrain. For most of this climb, a slip could be fatal. Nothing about this climb is technically hard, but the threat of a slip is omnipresent with mossy, brushy, wet feet and a lack of secure holds or protection. Maybe some revel in this sort of “blue collar” (more like bullshit) climbing, but I think those types are few and far between. Today, I certainly learned I am not tough enough for this; I am not a Cascade Hardman. And you know what? That’s okay. There’s plenty of other ways to enjoy the mountains that do not involve sketchy vertical jungling.

We reentered the brush tunnel and began the most painful rappels I have ever done. The rope snagged constantly and tangled in the brush. Big props to Doug for leading the way and dealing with the rat’s nest.

The hours ticked by and we slowly made our way down the vertical jungle. Eventually, we did a free hanging double rope rappel over a large cliff, which deposited us near the two piton anchor earlier in the climb. Each pull was tenuous, fighting incredible drag and fearing the knot would get stuck in the brush, which it did a few times.

The wet slabs that had annoyed us in the morning were now nearly completely dry. When we finally got down off the rock, we breathed a huge sigh of relief. We were on the face for 10 hours and barely got over halfway to summit of North Index. Our dreams of the entire traverse were completely foolish, in hindsight.

I took a jump in Lake Serene, just like old times, before we sat in terrible holiday traffic heading home. 16 hours car to car for a failed attempt on North Index. Ouch. That is what you call a blue collar beatdown.

This climb was certainly a humbling experience. Doug is as experienced and talented of a climber as one can find in the PNW and I generally feel I can hold my own on long alpine moderates. Yet both of us felt utterly destroyed by North Index. I have never been on such a relentlessly rugged and sketchy mountain. We hold huge respect for anyone who has climbed North Index, and even more incredible awe to the first ascent of North Index by Lionel Chute in 1929, with just a 40 ft manila rope and some guts of steel. That’s the legend of a true Cascade Hardman.