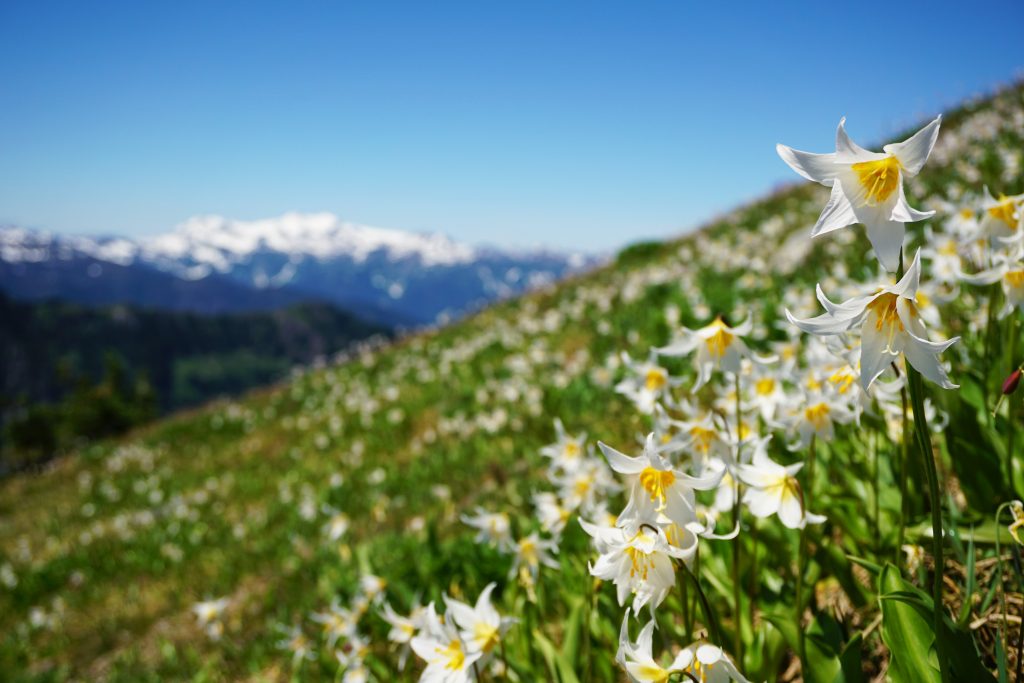 Olympic National Park has a vast, interwoven network of wilderness trails. The valley approaches are long and the meadows are legendary. One loop that obviously jumps out to the intrepid backpacker or trail runner is the loop from Deer Park to Obstruction Point, over Grand Pass, Cameron Pass, and Lost Pass, before returning via Grey Wolf Pass. This is the vaunted “Grand Loop.” I have had my eye on it for a few years but always felt intimidated by the supposed stats: 43 miles and 15k ft gain. Lately, however, I have been in the best long distance running shape of my life, so the idea floated back into my field of view. It seemed like the perfect challenge to push my boundaries and see how I would fare.

I called up Peter and he decided to join me for the first part of the run. We met at Deer Park and started around 7 am. The trail towards Obstruction Point has ample views and is well maintained. It is a great way to begin the day.

Despite the ups and downs, we were able to jog at an easy pace because of the perfect trail conditions.

We found ice in the creeks along the ridge, signs of a cold night. In the sun, it already felt warm. But there was also a gentle north breeze. Perfect sending temps.

At Obstruction Point, we continued upwards along the broad, easy ridge. Ridge running is so easy in the Olympics compared to the Cascades – such huge, broad ridges, and the scrambling rarely becomes technical. Peter, living nearby, has thoroughly explored the Northern Olympics and has some epic ridge runs.

We reached the junction where the normal “Grand Loop” route descends into Grand Valley. However, there is an unofficial high trail over Moose Peak. We knew this would add some elevation gain and slow us down, but Peter and I can never turn down more ridge running.

The “trail” over towards Moose Peak begins well enough.

The ridge becomes knife edged just before Moose Peak. The “trail” descends off to the left and sidehills across choss. That did not seem very aesthetic, so we kept to the ridgeline. Soon enough, we were scrambling 3rd class on just-solid-enough-to-not-be-scary Olympic choss. Thought this was supposed to be just a trail run?

The summit of Moose Peak had some small bivy walls and great views into the heart of the range. At 6750 ft, it was also our high point for the day.

From where we entered Grand Valley, it was a short 1000 ft climb to Grand Pass. Throughout the run, each climb gets progressively longer, culminating with the 3200 hang-on-for-dear-life climb back to Deer Park to end the day.

There is a cute little tarn near the summit of Grand Pass. We both took a quick dip, jumping off a snowslide. Refreshing!

It is always fun to have friends along for adventures like this. By myself, I would never take the time to go swimming in an icy pond. But together, we were just two boys playing around in the mountains.

The descent down from Grand Pass is supposedly the steepest trail in the park. The steepness made it challenging to actually run and we had to expend energy in our quads to stop from falling. This would become a common theme of this run – the descents are less runnable and take more out of you than you expect.

Down at the Cameron Creek Trail, I said goodbye to Peter. We were four hours and fourteen miles in. He was just heading back to Deer Park, which would give him a nice 26 mile, 8k day. Reluctantly, I turned uphill and plunged into the brush.

Once past Grand Valley, the trails on this route become largely overgrown. They are never hard to follow, but the brush definitely makes it difficult to see your feet and move efficiently downhill at times.

Cameron Basin was even more marvelous than Grand Valley, with sparkling streams and wildflower meadows.

After feeling a little bummed by myself in the bushes, I entered a new state of euphoria among the colors of green, yellow, red, purple, and gray. The sun was shining, the Olympics were in full bloom, and the position felt remote and wild. These are the experiences I seek from trail running – not some stressful race in the forests, but spiritual adventures by myself and with close friends deep in the heart of wilderness.

Cameron Pass had “knock-your-socks-off” view of Anderson and Olympus. Oh, the wildflowers were pretty good too.

The section between Cameron and Lost Pass was my favorite of the entire trip. Gentle switchbacks, murmuring streams, and millions of wildflowers made for an alpine wonderland. I was in heaven. If only I didn’t have to move so quickly through it!

I reached Lost Pass 6 hours into my day. This was the furthest point from the start and truly the point of no return. I love a little commitment, throwing yourself into the deep end and seeing how you respond, mentally and physically. When there is no turning back, the way forward becomes simply the way.

The descent down to Dose Meadows was similarly steep and slow. From there, I did my best to maintain a good pace down the brushy trail. I passed Isaiah Hemmen, partway through a 120 mile run from Tubal Cain in the NE corner of the Olympics to Bogachiel on the west side! We chatted for a bit and I wished him luck. There’s nothing like a good 120 mile run to make a 40 mile run seem trivial.

It was the heat of the day as I climbed to Grey Wolf Pass and I admit I struggled a bit on this climb. Mentally, I knew I was barely two thirds through the run so the huge amount of terrain left before me definitely had me intimidated.

I passed a man hiking down from Grey Wolf Pass who came all the way up the Dosewallips. His father died six years ago and his ashes are at Grey Wolf Pass. He does this hike every year on this date in memory.

After Grey Wolf Pass, there is a long 4000 ft descent over 10 miles. I was hoping to cruise this, but once again, the trail was more technical than expected and had needless ups and downs. My quads felt wrecked from 13,000 ft of downhill and I struggled to manage 12 minute miles. At least it was shaded.

After two hours of pounding descent, I finally reached Cameron Creek. I got a little turned around because the maps show the trail on the wrong side of the river, but some backpackers helped me out.

All that was left was simply 3200 ft of climbing back to the car. The climb was shaded, consistent, and gentle, if nothing else. I felt a second wind coming on, drove the poles into the ground, and recruited my whole body and will. One of the most empowering feelings in ultra running is breaking through the barrier and pushing yourself beyond what you should be capable of. After you do it once, you know you can do it again. It never leaves you. It’s all around us, in the hills, in the streams, in the meadows.

As I neared Deer Park, I looked at my watch and realized I might be able to come under 12 hours. Going in, I expected 14 hours. Unfortunately, I got lost in the campground and arrived at my car just 4 seconds after 12 hours! 12:00:04. Still, not shabby for some bonus scrambling and a pond dip. A year ago, I managed the Timberline Trail (same distance, 4,000 feet less gain, easier trail) in the same 12 hours. It is incredible to see how a year, a little better training, and smarter nutrition (using electrolytes) has made such a difference!

The Grand Loop is a run I have been waiting years to do, and the wait paid off. It is possibly the most spectacular trail run I have ever done (the Napeequa in the fall is pretty great also). The constant views, endless wildflowers, and relative solitude made it feel like the quintessential Olympic run. So much magic. So much beauty. So much vert!

4 thoughts on “The Grand Loop”