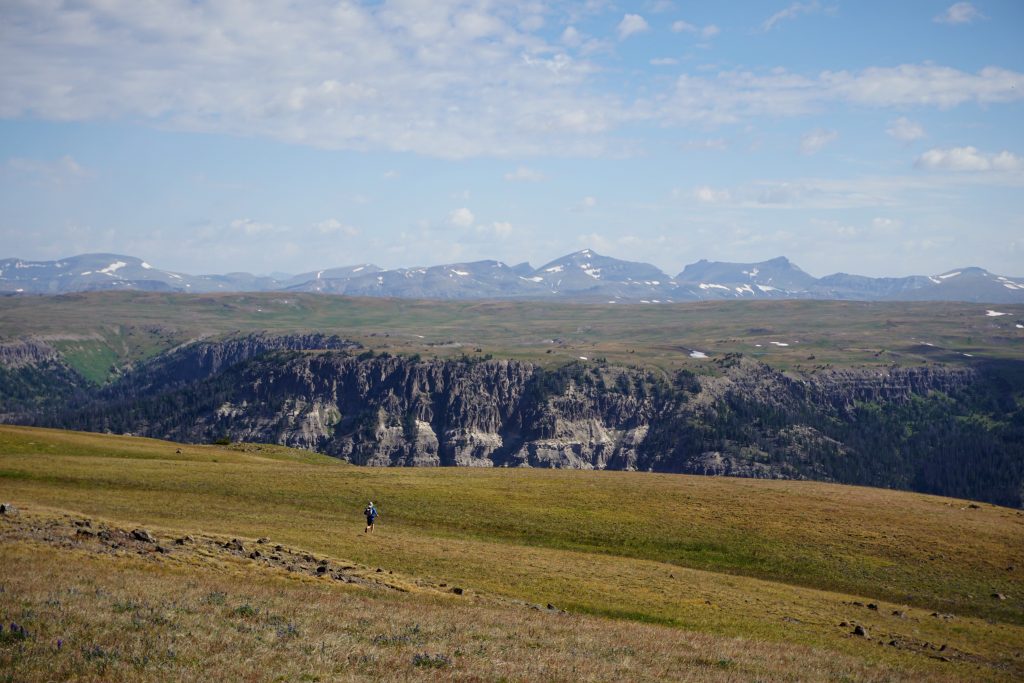 Within a stone’s throw of the legendary Wind River Range and the famous Tetons, the Absaroka Mountains are a much broader, more mysterious group of high plateaus. While scouting them on a map, the expansive flat plateaus immediately called to me. There is not a lot of information on this area, but I knew I had to do some exploring.

Sam and I were looking for an easy day before the Teton Crest Trail. We drove up to Brooks Lake at Togwotee Pass for the evening. Luckily, I passed by the camp host, which led us to a conversation about trails. He directed us to the Bonneville Pass Trail (which wasn’t even shown on our maps), which would give us quick access to the alpine. So we made a new plan to get up on the plateaus above Bonneville Pass and then went to bed.

We got started in the morning up the easy trail towards Bonneville Pass. In no time, we were up in beautiful meadows near the pass.

When we could, we cut left directly uphill. 20 minutes of steeper hiking brought us to the top of the plateau. Less than an hour from the car, we were standing atop an endless world of tundra, flowers, and views. It was pretty special.

We were delighted to see high, flat, grassy meadows as far as the eye can see. Off trail travel was going to be easy, as we had hoped. We could even see Coffin Butte, a high profile miles away, our destination.

There are certain places that convey a sense of infinity. The Pasayten Wilderness, in particular, feels endless with its sprawling valleys and lazy ridgelines. But in the lower 48, the Absarokas fully surpassed any infinity I had previously experienced. It really reminded be of the vastness of the Brooks Range. How can one infinity be greater than another? Logic fails me, so maybe some photos will help explain.

Most of the travel was very easy, but if we ever left the greenery and entered the white and gray rock, it turned bad very quickly. The valley walls in this range are extremely chossy and terrifying, but the tops are flat and gentle.

We continued eastward on our high ridge that would connect us to Coffin Butte. We surprisingly picked up a horse trail that appeared and disappeared in the meadows near the lower point on the ridge. Around 10,000 ft, we hit the low point in the divide and started climbing once again.

The climb up Coffin Butte was about as gentle as one can expect from an 11,000 ft “summit”. We passed some beautiful high tarns as the gusty wind picked up.

We were curious about the supposed “Du Noir Glacier” on the map. It wasn’t anything more than a little snowfield, but they have different standards here in Wyoming.

Coffin Butte was pretty much flat on top, but a few stacked rocks denoted that we had reached the summit.

I’m not sure I have been to any other place that bleeds freedom like the Absaroka Wilderness. The expansive plateaus and endless flowers simply beg for high route exploration. This region is so vastly underdeveloped and underexplored compared to the Winds and Tetons. I know I’ll be back.

On our way back, we tried to follow a horse trail from one of the lakes back across to Bonneville Pass. It went perfectly until, just before the pass, we ran into an unavoidable section of dirty gullies. We crossed directly, following goat prints through the loose rocks. It was not too bad, but the horses definitely did not go this way. Alas, the origin of the horses is a mystery for another day.

Back at Bonneville Pass, we cruised back to the car a little less than 6 hours after starting, with plenty of time to stuff ourselves in Jackson before the marathon the next day. Exploration, check. The Absarokas are pretty cool.