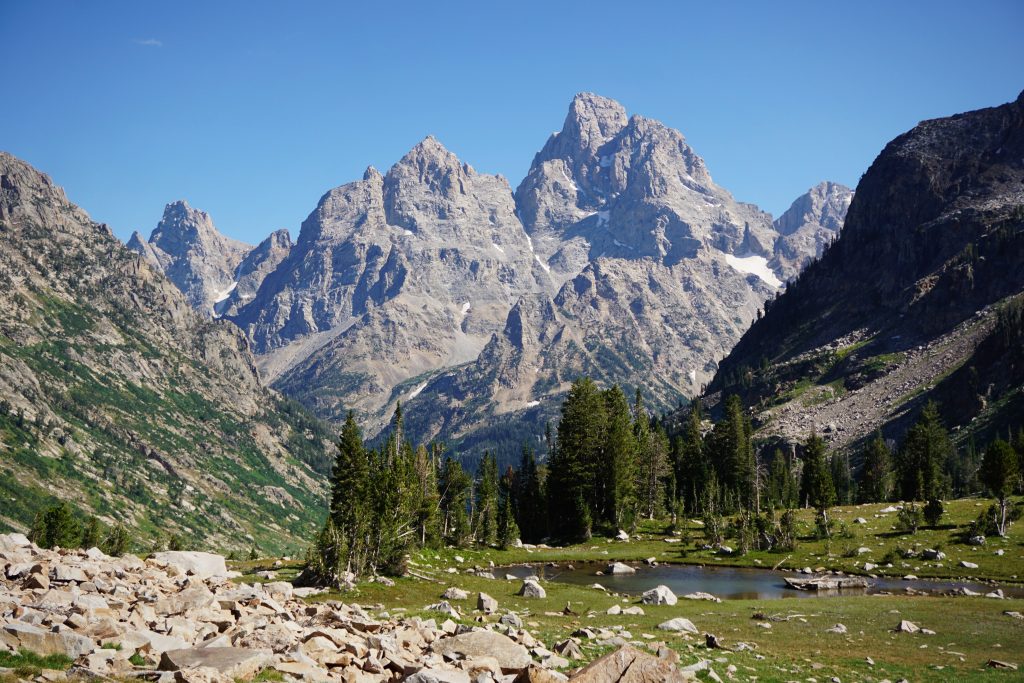 When I originally invited Sam on the Wind River High Route, the first thing he asked was if we could add in the Teton Crest Trail afterwards. I have climbed and skied in the Tetons, but never ran, so it sounded awesome. Luckily, our friend Deborah connected us with her friends Evan and Doug, who were in the area. With four energetic young men and two cars, the show was on.

There are various places on the southern end where people start for the Teton Crest Trail, but we chose to do the “standard” start from Phillips Pass. This makes the run slightly over 40 miles, but also net downhill because of the higher start. After shuttling the cars, we got going around 7 am up the easy trail towards Phillips Pass.

The final gentle climb up to Phillips Pass passed through a wonderful section of head-height fireweed, blazing in the morning sun. The boys got quite a bit ahead as I snapped photos.

Sam was doing a good job pacing us, making sure no one got ahead and started running the uphills. Sam and I were both coming off of 10 days of backpacking (aka calorie depletion) so our energy was low. From the start, my legs just felt unusually weak. Evan and Doug had just got out of the Cirque of Towers the night before. Additionally, Doug had not run longer than 30 minutes since breaking his ankle. So we all had good excuses for being slow. Oh, another excuse was photography.

Generally, there was abundant running water (which I did not filter) and the trail was fast and smooth. No incline is very steep in the entire route, so I could see a strong runner actually running most of it, as opposed to our not-so-powerful hiking.

Around Fox Creek Pass, you start to get your first clear view of the Grand Teton. I originally thought that the Teton Crest Trail would be in the shadow of the Grand the entire way, but for most of the run, you actually cannot see it. That is fine by me, because I actually found the other sections to be even more beautiful. There’s more to the Tetons the simply the Grand.

The next section crosses Death Canyon Shelf. The Tetons are full of these incredible “shelves”, high flat benches overlooking steep canyons. I remember standing atop the Grand and gazing out at all the incredible shelves and imagining how sweet it would be to run across them. Fast, beautiful, easy – trail gold.

At Mt. Meek Pass, we crossed into a more slabby landscape. The rock kept changing. If only Logan was still with us, he might be able to tell us something intelligible about the geology.

There were more campers at Alaska Basin than anywhere else. We even spotted 7 tents tightly clustered at one point. On the far side of the basin, the terrain became more meadowy again around Sunset Lake. The wildflower explosion here was the most colorful of all.

The climb up to Hurricane Pass entered more sandy, arid terrain. The desolation reminded me a lot of the blast zone or Fields of Abraham on the Loowit Trail.

We took a good long break at Hurricane Pass. Doug was feeling pretty tired and Evan’s knee was acting up, so they resolved to exit out Cascade Canyon and meet us at the car. Sam and I would continue up the 2700 ft climb to Paintbrush Divide, the longest climb of the trip.

The scenery changed dramatically from the lovely fields of flowers earlier in the trip. This part of the Tetons is steep, rocky, and intimidating. Unfortunately, the trail, too, was rocky.

We followed the roaring water down Cascade Canyon for 5 miles of punishing descent until we reached the trail junction at the base of the valley. As I waited for Sam, I watched countless day hikers on the Paintbrush Cascade Loop exclaim with relief when they reached the junction, knowing they only had 5 miles left before the car. If only they knew I had their entire hike remaining!

We slowly wandered up the North Fork of Cascade Canyon, passing a startling amount of day hikers (probably a few hundred) coming down. Every time I turned around, the Grand smacked me in the face with one of those “how-dare-you-forget-about-my-presence” views.

Lake Solitude, ironically named, provided a short break before the final grind to the divide. Sam was deep in the pain cave here. He is only a month or two removed from a busted knee, so it is pretty impressive that he can log a 40 mile day like this. It goes to show how most of ultrarunning is just using your mind to trick your body into doing such a crazy thing. Some people might actually have the fitness to run an ultramarathon, but the rest of us have to play mind games.

Near the divide, I passed some distressed dayhikers still heading up. They were not sure if they would make it down before dark and they did not have headlamps. I told them to keep hiking and offered Skittles. Those Skittles were carried 30 miles for them. Training weight.

I had envisioned Paintbrush Divide to be some wonderland of paintbrush flowers and lush meadows, so I was a little disappointed to find just a giant moraine pile and a trail cutting through it. Oh well, take what you can get.

I talked to a nice group from Illinois backpacking. One guy told me he heard it rains a lot in the Cascades. I told him he was correct.

I set off down through the boulder moraine towards the flatlands below. The hordes disappeared, the wind stopped, and for the first time in the day, it was simply me and the mountains. I often experience a second wind (or in this case, a first wind) of energy at the end of these long days. There’s something about the way the evening light shines gold in the trees as the day rushes to an end. A day in the life; a life in a day. Brilliance flashes for a moment, and then it is gone.

For the first time all day, I actually felt like I was cruising. I guess it just took 30 miles to shake off the cobwebs from a week of boulder hopping with a pack on.

I passed a group of four girls about my age perched atop boulders, watching the sun go down. They gave me a good cheer.

“Thanks! Make sure to give my buddy a cheer when he comes by, he’s struggling a little more!”

“Should I flash my tits?”

I chuckled at the fact that we were, after all, in the range of Titties (look up what “Teton” means in French).

The trail was pretty easy, with minor ups on the way down. I got a little confused at a trail junction, unsure whether to continue to String Lake Picnic Area or String Lake Outlet and chose the outlet (spoiler alert: I chose correctly). Doug and Evan greeted me at the car and a while later, Sam rolled in.

The Teton Crest Trail was a magnificent route, possibly the best pure-trail run I have ever done. It’s fast, it’s scenic from start to finish, and it’s aesthetic. Big thanks to Evan and Doug for joining us on the adventure and providing hilarious entertainment. And thanks to Sam for suggesting the idea and braving the whole 41 miles. Until next time, Wyoming!