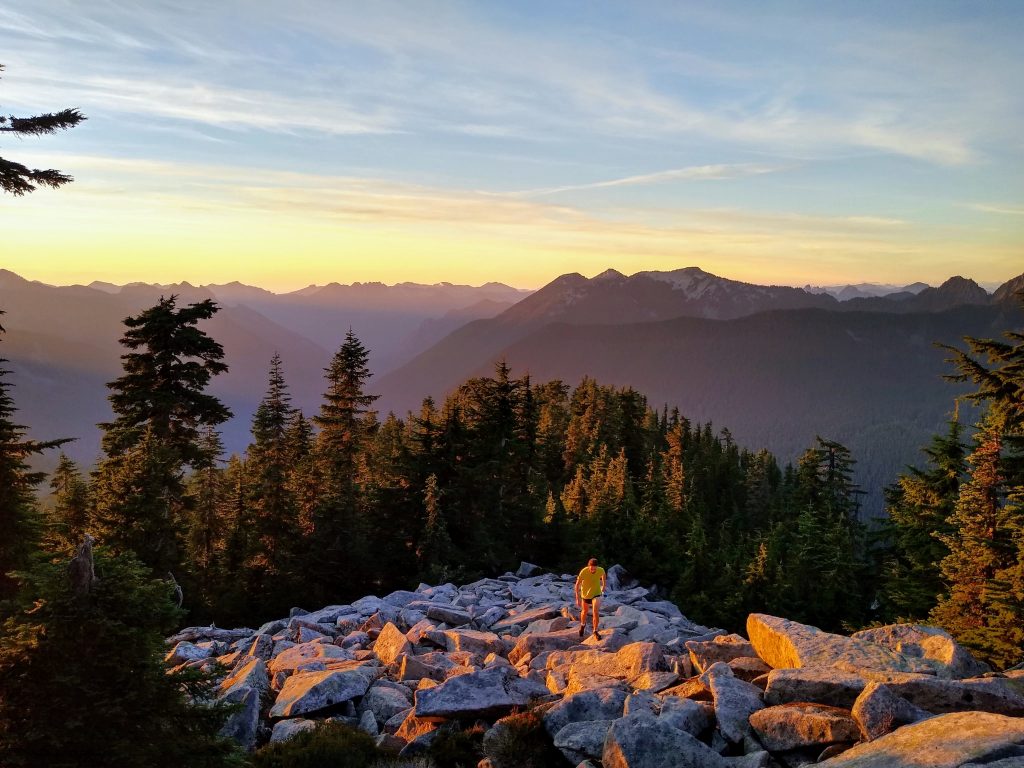 Racing the Sunset, Embracing the Moonlight

Granite Mountain – few words install as much fear in the PNW Instagram hiker. The massive peak looms over the I90 corridor, second to only Little Si. Conquering the beast on its own is quite an accomplishment. But one night, after watching a particularly bad episode of “Tiger King”, I had a dream: the Granite Mountain Traverse.

Because of the peculiarities of seasonal variations of magnetic particles in the atmosphere, I calculated the optimal send date to be August 26th. Next, I assembled the team: Gavin, Kurt, and Stanley. The game was on.

We got to the trailhead around dinner time, making the best of working lives. We paced ourselves well, hiking quickly towards Olallie Lake. The last time I was on this trail was for the Pratt-Melakwa-Snow Lake Loop. A few miles in, we passed a pile of rocks stacked on top of each other. I took it as a divine sign and dove into the forest to our right.

After a few minutes, we emerged into a beautiful stone garden.

We hopped our way up towards the ridge on our left. Already, the highway noise dropped away and all signs of previous human travel evaporated.

The ridge was a mixture of schwack, tussoks, and boulders – not the easiest terrain. But the layers were coming out in the evening light. How awesome is it to have these beautiful places so close to home?

The error in my calculation was that I failed to account for the fact that the days are so short in late August! The sun dropped below the horizon as we topped out on West Granite. The main summit of Granite, the security of a trail, the comforts of civilization – they were all so far away, with so little time. I began to get worried we would have to spend the night out. I really did not want to have to cuddle with the boys for warmth – not because I don’t like them, but just because I know one of us would end up getting eaten out of desperation. And then I wouldn’t get my gas money. So the race was on.

At the end of the day, everything seems to accelerate – a brisk north wind chilled the exposed skin on our arms, our heads were spinning at the sheer size of the terrain, as the colors raced into the big emptiness above like paint spilled in a pool.

We dove into the trees once again, moving towards the main summit of Granite. It became increasingly dark in the trees, but I was resolved to reach the summit of Granite without using headlamps. Headlamps are aid.

Just at the last moment of light, we broke out of the trees, and the lookout was no longer so far away. We were gonna make it!

We collapsed onto the summit in sheer exhaustion at the very last moment before headlamps would be needed. The Granite Mountain Traverse had pushed us to our limits, but we had broken through those limits. I was proud of the boys.

Now, we just had the convoluted descent of Granite Mountain proper. After 5 double rope rappels, and a bit of steep downclimbing, we found the climber’s trail and got on our way. It was rocky and we were tired, but we managed, getting back to the car around 10 pm, right before hallucinations began.