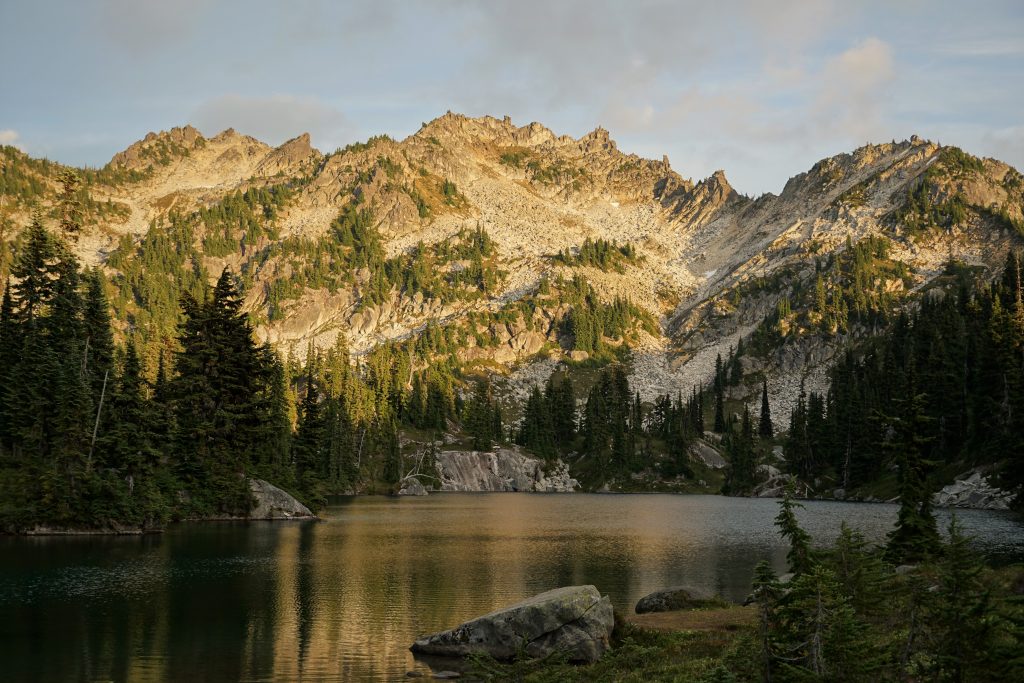 Most summers, my sister, her husband, and my dad try to go on a backpacking trip together. This summer, we had trouble aligning our busy schedules but managed to find one weekend at the end of August that worked for everyone. There was much debate where to go – it needed to be manageable for everyone, ideally not crowded, and not too far of a drive. So I suggested the Chain Lakes south of Stevens Pass.

We got a leisurely start from Stevens Pass, hiking south on the PCT. Almost immediately, we entered lush blueberry and huckleberry patches and began gorging ourselves. Late August is such a great time of year for berries in the West and Central Cascades.

My dad and I were able to recognize the different runs we have skied here at Stevens Pass. He wondered why we were not just taking the chairlift up.

The PCT was pleasantly not too crowded. However, we did run into one man who was very hostile about mask-wearing. He stopped from a distance and started yelling at us to put on our masks or step 6 ft off the trail. In an area of dense brush, I put on a mask and we turned our faces off the trail, but this would not satiate him. He continued to yell at us and curse us out as he walked by. There was not even a consideration that maybe it was his responsibility to step off the trail, being an individual not a group, and in a place where that was easier to do. I guess rationality/utility is not a reasonable expectation of everyone.

The blueberries only continued to provide as we left the PCT near Lake Josephine and descended into Icicle Creek. Down in the valley, there were also ripe salmon berries.

The final 1800 ft climb up to the Chain Lakes was pretty steep. But it was nice to get out of the trees and finally get glimpses of the alpine terrain above.

The first Chain Lake was small and cute, tucked away in a tight little cirque. The rocky bluffs and pine trees made me immediately feel like I was in the Alpine Lakes Wilderness, which, of course, was true. Already, my expectations had been exceeded.

We continued up the trail for a few minutes to the second lake. The setting here was truly sublime. The small lake was surrounded by blueberry bushes, heather meadows, small granite cliffs, and thin pine trees. Above, steep granite faces loomed, containing us in a tight little alpine lakes wonderland.

Nothing about this lake was extraordinary – yet in the way all of the elements came together synergistically, I think it was the nicest all-around lake I have ever been to in the Alpine Lakes Wilderness. It just felt like the quintessential alpine lake for this area. Especially after visiting the magical lakes of the Beartooth and Wind River Ranges, the character of this one felt so much like home. If I had to choose one lake to represent the Alpine Lakes Wilderness, it might be this one.

After setting up camp, Shane, Sara, and I set off towards Bull’s Tooth, the highest peak in the area at 6800 ft.

The climb up towards Bull’s Tooth was typical of the Alpine Lakes Wilderness – a deceptively complex mix of steep heather, mossy slabs, bushes, and cliffs. But we picked our way into the upper boulder fields.

It got a bit looser and sandier about 100 ft from the stop, so Sara stopped here. Shane and I continued up a little third class to the highest point on the ridge.

Bull’s Tooth is highly prominent and feels kind of like an island. Thus, it has wonderful 360 degree views of the Alpine Lakes Wilderness, the Stuart Range, the Chiwaukum, and the Glacier Peak Wilderness. I could see dozens of places I had been and peaks I had climbed. It is always fun to get a different perspective on things.

It was windy and cold, so we snapped our photos and headed down. We got back to the lake just as my dad was finishing a nice hike around the lakes.

After dinner, the sun came back out just in time to light the little basin around us. I forgot how beautiful the sunsets can be at our lakes as the granite turns to gold and the green heather softens in our eyes and the lakes sparkle like glass in the still air.

We decided to chase the sunset by racing up the trail towards the Doelle Lakes.

Eventually, I stopped chasing the light and instead watched the clouds go from yellow to orange to pink to purple and finally back to gray.

It was an unseasonably cold night. We woke the next morning to frost all over. Luckily, the blueberries were not frozen. I collected some and added them to my oatmeal.

When the sun finally shone through a gap between two peaks, we immediately felt warmth after a long, cold night.

It was time to go, but we lingered, watching the sun’s rays filter through the trees and slowly creep across the lake, creating heavenly steam and shadows. One just never really wants to leave these places.

The hike out was uneventful. Copious berries were consumed. No one yelled at us. All in all, this was a successful family backpacking trip to yet another beautiful alpine lake, one amongst hundreds here. It’s great to be back home.