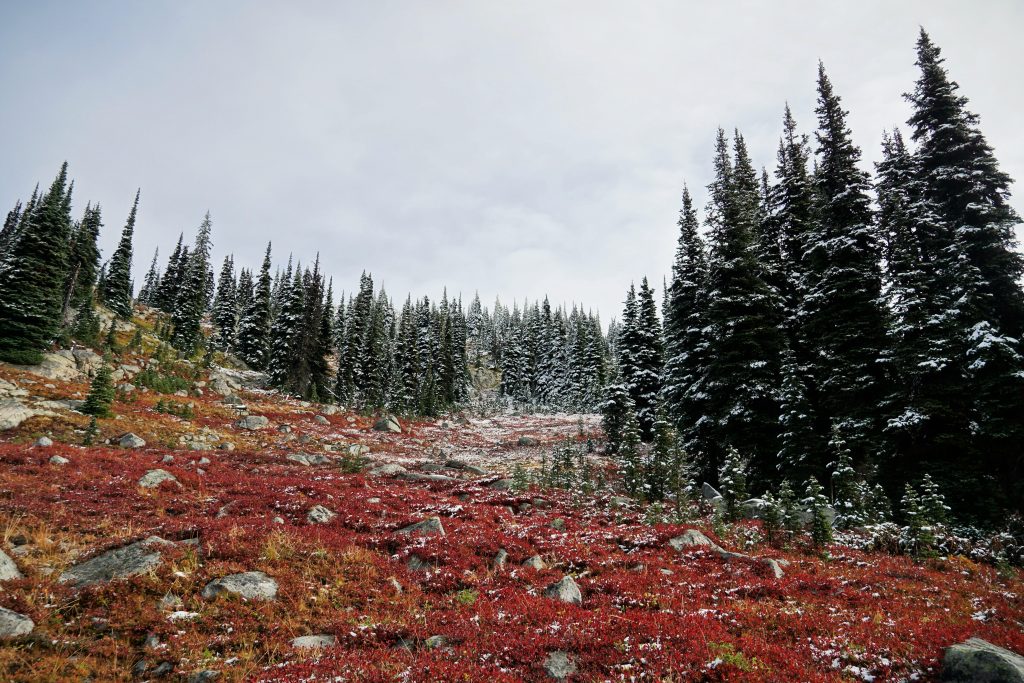 For the first weekend of fall, Cherlyn, Nastassia, Issac and his dog Blue and I did a nice little loop from the Stiletto Lookout Trail to Copper Pass, circumnavigating the Stiletto Jacknife “massif” in the process.

For the second time this season, I began downhill on the PCT from Bridge Creek. The Stiletto Trail has a nice grade and makes for a good warmup.

As we broke out of the trees, we gazed out at wispy clouds breaking up, the first clearing since an impressive 5-10 inches of rainfall to start astronomical fall. Before that, we were inundated with terrible smoke from California and Oregon wildfires, so it had been a while since we all had gotten out.

Around 6k, we entered beautiful fall meadows with a hush of snow. I remember running floating down through these golden meadows during the Triple Rainbow High Route one year ago. That day is still one of the best days in the mountains I have ever had – the perfect confluence of conditions, vision, exploration, partners, and execution. In the process, I “discovered” an area of the Cascades that made me forget that I was even in the Cascades. A mountain range within a Mountain Range.

The snow was probably around 6 inches deep by the time we reached the lookout at 7k. Although Blue is a husky, it was her first time ever playing in snow. It was also Isaac’s first hike in the Cascades since moving here. It’s always refreshing to see someone so moved by these mountains that can feel ordinary to me.

The clarity in the sky from the old Stiletto Lookout sight was stunning. A little fresh snow and fall accentuates all the features on the craggy peaks. It’s like drawing a highlighter over the landscape.

Nastassia has a super interesting background in endurance sports. They decided, on a whim basically, to walk from Seattle to San Francisco, initially in a snowstorm! 30 miles a day through through snow, rain, not to mention the social challenge of meeting people for help along the way. Super unique.

Cherlyn and I took turns taking photos of each other on the distant sub summit.

Eventually, we started wandering eastward from the lookout, hiking through beautiful larch glades. The larches were still quite green, but Cherlyn was still in heaven. “Yellow Trees!” She exclaimed. It’s her favorite thing. One helpless case of larch madness. Her condition appears to be permanent.

I covered this same off trail section last year during the Triple Rainbow. The mood was very different this time with fresh snow, a bigger camera lens, and more friends.

We took a break at the lake beneath Jackknife Peak. The air was incredibly still, making for great reflection shots.

The next section had a boulder fields with some fresh snow. This was painfully slow for Isaac and Blue.

Nastassia has some hilarious names for our peaks: “Dakobuddy” for Dakobed (Glacier Peak) and “Bananas” for Bonanza.

As we approached Copper Pass, we climbed directly to the ridgeline. This left us with a few hundred foot descent to the pass. There was a short rocky class 3 steep that was a little challenging for Blue, but she made it through with some coaxing!

Most valley trails in this area are rather boring, but the Copper Pass Trail manages to stay in beautiful meadows for many miles. We saw a few parties here, more than we had all day, but still very few for such a beautiful, accessible trail near the highway.

The trail that connects back down to Bridge Creek is unmarked and not where the GPS shows it to be, so stay alert for it.

The loop ended up to be about 13 miles and 5000 ft gain. The off trail section is about as easy and pretty as it gets in this part of the world. This is a quiet, but very accessible part of the North Cascades that feels often overlooked. Thank you to Cherlyn, Nastassia, Isaac and Blue for a fun, relaxing day!