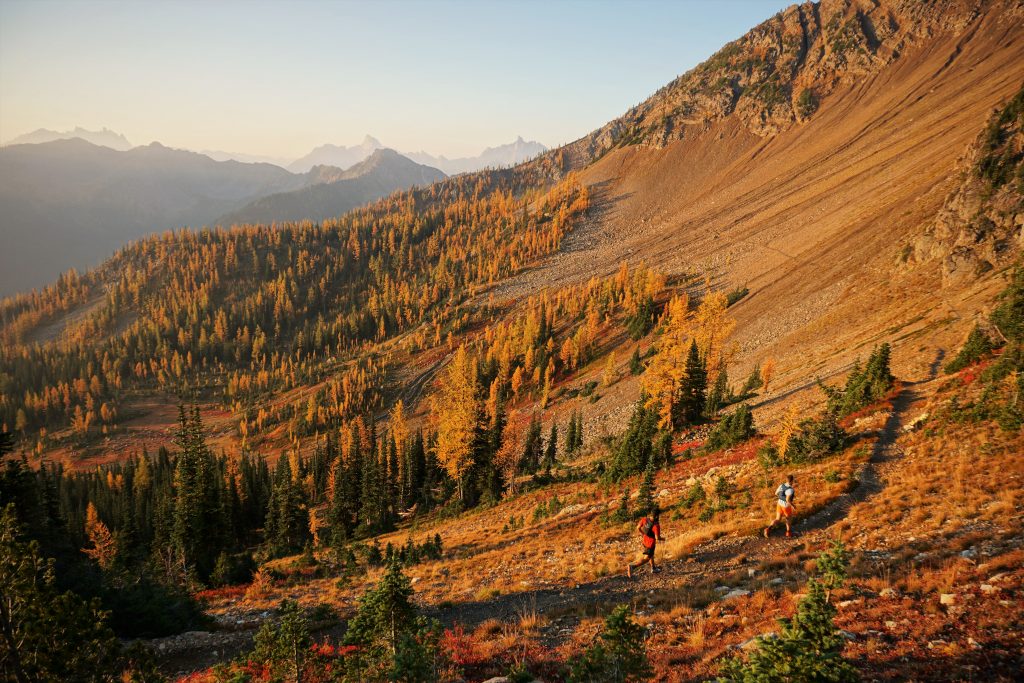 Avid followers of my blog may have noticed that Summer 2020 lacked one notable participant: Daniel. Back in the winter, Daniel and I were bouldering at Seattle Boulder Project when he landed weirdly and sprained his ankle. The recovery took many months and he only started running again at the beginning of summer. Still, he managed to work himself into the best shape of his life and decided his goal was to run over 50 miles in a day. Crazy, right?

There are many different 50+ mile routes in the Cascades, but he wanted one with easy terrain and minimal gain (a tough find out here). He had the secret advantage of an all-too-sweet offer from Mills: full support and car shuttle for any route he pleased. So he devised a plan to run from Harts Pass to Rainy Pass, resupply, and then run to Cascades Pass. The run would be 60 miles and remarkably only 8k of gain.

After hammering myself with 44 miles and 12.5k gain on out-of-shape legs a few days before on the Little Giant Spider Loop, there was no way I was completing the full 60 miles, but I could not pass on the offer to join for Harts to Rainy.

Daniel, Mills, and Austin picked me up in the early morning from Rainy Pass. Austin is by far the most experienced ultra runner in our group, having completed multiple 50+ mile runs before.

After a summer of no Daniel, it was great to catch up and finally meet Mills and Austin for the first time. At Harts Pass, we familiarized ourselves with the most malodorous bathroom I’ve ever been violated by. There were some chemicals in it that burned the nostrils.

We started off a bit before dawn under a bright harvest moon. This was only my second time at Harts Pass and first time going south from there.

The PCT winds through an old burn before entering spectacular larch forests. The smoky horizon made for a muted sunset, but really it just delayed the golden hour.

Even from the start, my quads felt sore and tired. I was nowhere near recovered from Tuesday, but I felt like I could at least make it through 30 miles if these guys were going to do 60.

As we rounded Cone Peak, a blood red sun broke the horizon. The burned valley of Trout Creek had this eerie, post-apocalyptical feel that was, at the same time, peaceful and calming.

For a brief moment, the PCT rides directly on the crest. To the north, the Pasayten feels endless. To the south, the inseparable Golden Horn and Tower beckon. Azurite and Ballard demand respect.

Ballard and Azurite are very impressive from this angle. I was not even aware of Ballard and had to look on a map to get the name.

Maybe it was the smoke or maybe it was the larches, but the light felt so soft and warm everywhere. Timing is crucial in the mountains, and here we were, cruising on this perfect trail through hallways of golden trees and golden light. These are magical moments that stay with us long after we have moved on.

As we rounded the corner, we were met with a ridiculous view of Azurite. This is another mountain I’ve never seen before, but was very impressive.

At the pass, we met two women (holla Liza and Rachel!) running Harts to Rainy also, so we asked for a group photo.

During the descent down to Glacier Pass, I really started to feel my quads again. By the time we reached the bottom of Brush Creek, they had apparated into the smoky air. My high school coach liked to use the metaphor of putting “money in the bank” during training, so you could make a withdrawal on race day. Well, there was no money left in the bank. I was about to pay overdraft fees.

Down at the bottom, we met an entire family, with even some 10 year old boys, walking Harts to Rainy in a day! I imagine I would have revolted if my parents forced me to march 30 miles at that age.

I was greatly relieved when we actually started going uphill towards Methow Pass so I had an excuse to walk instead of jog. It is a strange feeling to feel so fine cardio-wise but so destroyed muscularly.

The climb up to Methow Pass offers fine peek-a-boo views for the north face of Hardy.

At Methow Pass, we took a nice long break to lounge in the larch meadows and take some seductive photos. The best ones won’t be offered for free here, you’ll have to inquire for those.

We quickly ran into a confused group of climbers. They had obviously missed the Snowy Lakes turnoff. They had ice axes, which seemed unnecessary for Golden Horn. Turns out their original plan was to climb Black Peak, but they started in the wrong direction from the highway that morning. Oof.

There were plenty of backpackers now heading towards the Snowy Lakes. If they were all camping there, it was going to be a busy night. The lakes are at a really nice spot. It was the first place I took Kylie in the Cascades, over 4 years ago now. Damn, it feels just like yesterday: 19 years old, with a blindingly bright future and all the optimism in the world. The mountains don’t really change, fortunately, but we do.

The crowds multiplied 10 fold as we approached Cutthroat Pass proper. This is one “the five larch hikes” in the Cascades. There are no other places to see larches. Nope. Not a chance. Gotta do one of those five. If you feel like taking a chance, my friend Cherlyn put out a nice guide on alternative larch hikes.

I plodded downhill with zombie legs behind Daniel and Austin. I was pretty relieved when the parking lot came into view. We completed the 30 mile section is under 7 hours. This was definitely the fastest pace I have ever taken during an ultra, but it was net downhill and very easy terrain.

Mills had secured a parking spot right at the trailhead. We were treated to home baked goods, cold beverages, and these awesome massage guns (no, I don’t make money if you click on the link)!

We hung out for a while. It was so nice to have Mills waiting for us. She had a nice hike up to the base of the Liberty Bell Group herself that morning. She was in for a long day, planning to pick up the boys at Cascade Pass well after dark. She is the true hero. Daniel basically devised the worst possible car shuttle and then gave her the task. Well done, Mills. Daniel is a lucky man.

Eventually, Daniel and Austin set off towards Bridge Creek and eventually Cascade Pass. It is impressive to have the mental strength to stop, enjoy the luxuries of life, and then condemn yourself to another 30 miles of pain. Mad props to them.

As I migrated to the Methow Valley for more larch peeping, Daniel and Austin finished up well after dark for a total of 60 miles over 15 hours or so. Congratulations on such an incredible accomplishment! I was grateful to tag along for the first half and snag some awesome shots.