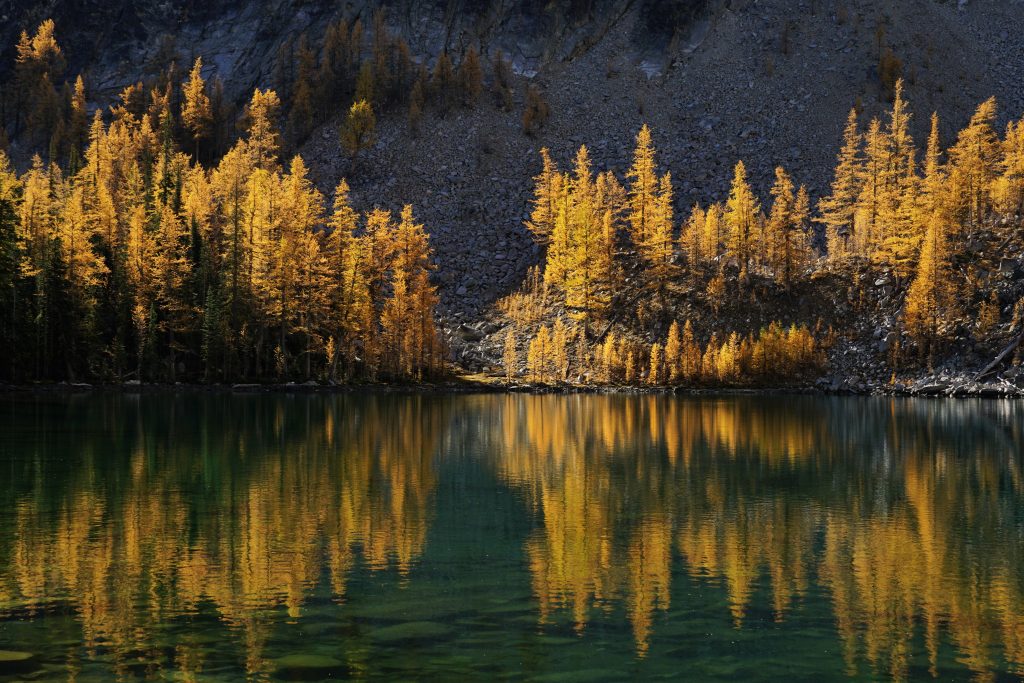 Halfway through the work week in Winthrop, Steve and I took a day off to hike the Golden Lakes Loop in the southern Chelan Sawtooth. The 23 mile loop, popular with horses, bikers, and hikers, starts at the Crater Creek Trailhead and goes past the Eagle Lakes, Boiling Lake, and Cooney Lake through beautiful high country and larch meadows.

I had first visited these trails 4 years ago when I traversed between Switchback, Martin, Cheops, and Bigelow. It was my first time in the far east of the Cascades, and the scenery and bikers all felt foreign. The weather was kind of nasty, so I wanted to return during a sunny fall day.

The trailhead starts at a ridiculous 4700 ft, but the trails gain elevation slowly as they are windy and graded for mountain bikers.

We took the side trip to Upper Eagle Lake and started to enter mature, old growth larch forests. In much of the Cascades, the larches are only small alpine larches. But the Chelan Sawtooth is loaded with massive subalpine larches that are often many feet thick at the base and probably a hundred feet tall.

Upper Eagle was quiet and still rather calm in the morning. Steve lamented that we did not arrive early enough to get a perfectly still reflection shot, but that would have required starting in the dark. We’re on vacation right? Sleeping in is required.

We sat for a while on the lakeshore, just admiring the golden reflections on the lake, much like pastels on an easel. Both Steve and I brought our long lenses and nice cameras, which took up most of the space in our running vests. The mood of the trip was clear: there would be little running and lots of photographing.

Back on the main trail, we continued to the high pass.

Boiling Lake was completely deserted and tranquil. I remember arriving at this lake during my traverse four years ago with the sky spitting on me. The lake felt much like a ugly marsh then. But today, under crystal clear blue skies and golden larches, it was lovely. It’s funny how interwoven place and conditions are in our memories.

We were pleased to find the spring that feeds Boiling Lake to be flowing. Water can be tough out here in the fall.

Instead of taking the Chelan Summit Trail southwards, we followed some horse trails through higher meadows and infinite larch groves.

Throughout the summer, Steve and my trips together have been getting slower and slower. Back in June, we were flying through 20 and 30 mile days. Then came Goode, Watson-Blum, and now larch madness. On this day, we practically crawled through these heavenly meadows, observing their fleeting beauty in silence and isolation. Finally, there is nowhere to go. We are here. These are the golden days.

Eventually we reached the intersection with the Angel’s Staircase Trail, which climbs over the side of Switchback Peak. We had originally planned to extend the loop to Sunrise Lake, but after taking so many photos and moving so slowly, we decided to cut the loop a little shorter and go directly to Cooney Lake. This afforded the opportunity to tag Switchback in addition.

We passed some bikers dealing with a flat tire near the top of Angel’s Staircase. Steve didn’t want to carry Bug up the boulders to Switchback, so I set off for the final 300 ft. by myself, just like I had four years ago.

On top, I had splendid views of the Stuart Range, the Entiat Crest, Bonanza, the distant peaks of the Cascade River Road, the Chelan Sawtooth, and the Pasayten. Through a gap up the Stehekin River Valley, I could even see Mt. Baker, 80 miles away. 80 miles of wilderness, mountains, valleys, and glaciers – enough adventure for a lifetime and then some.

I knew Steve was waiting for me, but I couldn’t pull myself to leave so quickly. I watched the clouds float along and shadows shift on the land and thought about the last 10 days. From the Little Giant Spider Loop to Harts to Rainy and everything in between, the last 10 days were as good as it gets. I’m grateful for each partner, a willing body, and a perfectly timed window of splitter fall weather. In a way, it felt like 2020 finally gave us grace. It was tough to keep my body going through so many big days in a short period, but when it’s good, you have to seize the moment. Carpe diem.

I met back up with Steve and we trotted down to Cooney Lake.

On the lakeshore, in the warm afternoon sun, I laid my head down and stared up at clouds, blue sky, and the warm glow of larches. My heart felt full. I felt content, ready to be done, ready to move on with the seasons.

We began an easy jog as we left Cooney Lake. After a few more nice meadows, we said goodbye to the alpine. Snow and storms were coming soon. This was the last time in 2020 we would play in the snow-free alpine. It was bittersweet, but it was time to go.

The trail from Cooney Lake down is remarkably long and windy, the signature of a biking trail. We made up a little bit for a snail’s pace earlier in the day by jogging the needless switchbacks. But it wasn’t too long before we arrived back at the car.

In the ebbs and flows and storylines of the season, this day provided resolution and closure. While other days were captured through motion, this day was spent in stillness. Some days we dance, others we grind, and occasionally, we just stop and stare.