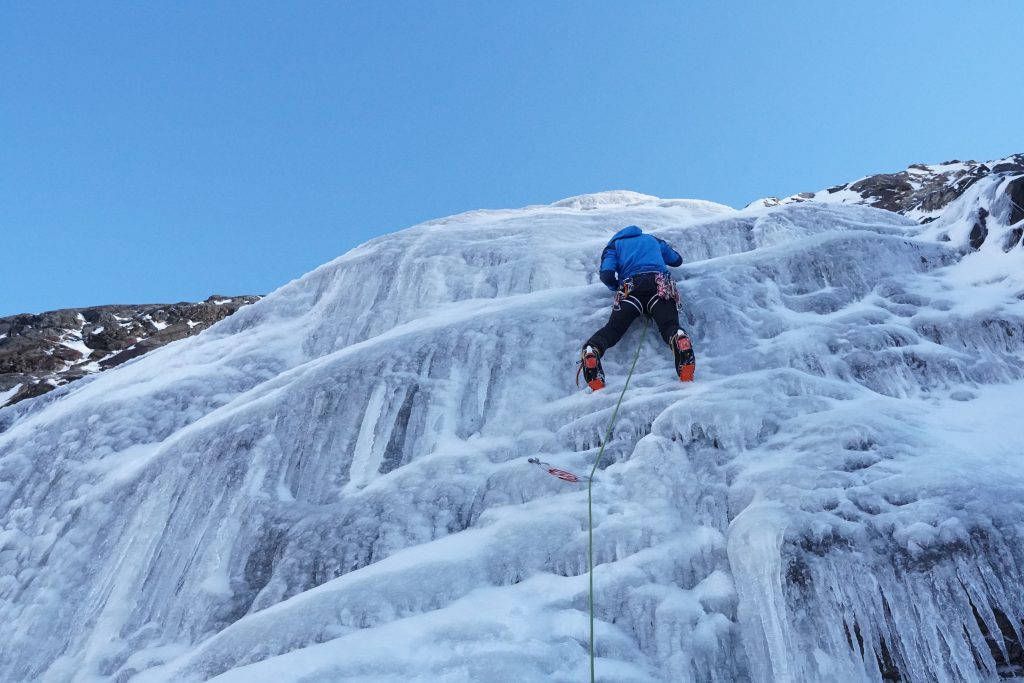 The Hunt for the White October

With cold weather in the forecast, Jon, Deb and I spent the weekend hunting for water ice on the cliffs above the Heliotrope Ridge Trail. The nearby Coleman Seracs are a well known ice cragging destination, but the water ice above the trail is plentiful in the right conditions. Last year, on November 1st, Anthony (of North Bend) and I had an absolute blast climbing all the good frozen stuff of the Heliotrope Ice Playground. What would we find this year?

Jon and I drove up Saturday morning and met Deb, Mike, and Anthony (of Sedro-Woolley, formerly of Salt Lake) at the trailhead. Mike just moved to Bellingham from Colorado and loves exploratory alpine ice and mixed climbing. Deb moved to Bellingham to teach at Western after finishing up school at Corvallis, where she climbed with my best mate Jacob. Anthony finally had enough of the Wasatch and moved out to greener pastures.

Kyle 1.0 was also at the trailhead, heading up for a day of skiing, so there were plenty of lively conversations as we walked up the trail. The signs I observed were discouraging for ice climbing, but the seracs were always a good backup.

We decided to check out the first pitch Anthony and I climbed last year, a 30 ft near vertical waterfall just above the trail. It was definitely “not in”.

So we bypassed this falls and continued up on annoying rock slab and breakable crust. Glad we were not skiing!

We spotted a nice little icy chimney. Mike and I were immediately drawn, but Anthony gave a firm “no”. A few minutes later, Anthony was the first to head up it. Funny how things go.

Jon has by far the least experience ice climbing, only climbing once before with me at Alpental Falls. But he was absolutely stoked for a little bit of “ice bouldering”. By the time I went, last, most of the ice was fractured or gone, so I chimneyed up on rock.

We continued up to the “Heliotrope Headwall”. The low angle ice pitch that we did last year was simply buried in fresh snow, but there was a nice thin ice slab pitch that Deb, Anthony, and Mike soloed up.

I wanted to get Jon more top rope practice, so we climbed a few laps on a lower flow. It was tough to make a good top anchor in centimeter thick ice on top of rock, but we found a good terrain stance for a butt belay.

After a few laps, we followed the other three, as I climbed the upper pitch and then belayed Jon up. We were glad to be back in the sun for lunch.

So far, we had not exactly struck gold like last year, but Jon’s infinite stoke and a beautiful lunch break were enough to make me happy if this was all we were going to get to climb.

We followed the footsteps of the other three for a ways, trying to find a break in the headwall to get back down. We had to hike most of the way westward towards the regular hogsback climber’s trail before finding a break in the cliffs. When we finally reached flatter terrain, I realized that a crampon had fallen off my pack!

I hiked back to near our lunch spot and retrieved my crampon. When I reached Jon again, he was eyeing a fat looking flow around the corner. So we decided that, while we were here, we might as well check it out.

As we got closer, it looked better and better. The lower section was just under vertical for about 15 meters and looked like it might be thick enough to actually take screws. We started to get excited and racked up.

To be honest, the “climbing” we had done up to that point didn’t even really feel like climbing. But this was real climbing, and I was on the sharp end. This was a moment I have thought about for many months. Part of me has wanted to hide from ice and just ski all winter. I’ve been worried I’d experience massive PTSD climbing again. But as I took my first swings into the ice, I felt surprisingly calm.

15 feet up, I got in a full 13 cm screw and could’ve gone even longer. The sticks were one-swing wonders. Hero ice.

When I cleared the final steep bulge, I knew it was over. But really, the battle was fought months ago, in my head, everyday, the battle between living a life dictated by fear and a life where fear is a friend. This was just an easy WI3 pitch, but I felt proud because of what I had to overcome in the months leading up to this moment. Honestly, it was relieving just to know I could still do this. I know I’ll never be the same climber, but maybe I can be a better climber.

Jon and I were both ecstatic. We found a beautiful pitch of water ice in October in Western Washington, within sight of the ocean. On this day, we could have climbed sunny, dry rock at Index. We could have shredded the trails of the Chukanut on the bike. During the shoulder seasons, sometimes it feels like there’s nothing to do, and sometimes it feels like there’s too much.

We walked down the Hogsback Trail in the afternoon. Some skiers told us the boot skiing here was better than the actual skiing up on the glacier. Oof. I was hanging out at an icy spot on the trail, watching people wipe out (three in a row!) when I met Liza again (from Harts to Rainy Pass) and we chatted on the way out, passing this hike that has become so familiar in the fall.

The next day, Deb joined Jon and I for some more laps on this flow. When we arrived, we were very confused to find it much wetter than the day before, despite nighttime temperatures in the teens. The road had turned to an ice sheet overnight, but somehow this waterfall became more water. There was a huge spigot of water in the middle. I was definitely not going to lead the center, like I had the day before. Because of this huge gash of water flowing out, we decided to name this climb “Femoral Bleed” (WI3, 20m).

Deb wanted to lead, so she led up the left side of the flow, which was once again just unprotectable WI2, but she did a good job as ice accumlated on my belay jacket from the spigot.

She was able to get in a decent three screw belay up top, which we backed up with a tool for an adequate top rope anchor. This allowed us to top rope slightly steeper lines on the left side of the flow. We each took many laps. Throughout our time there, the “femoral bleed” seemed to “clot”, and by the time we left, the climb was dry was once again. Very strange.

Jon fully embraced the “ice bouldering” opportunities. There was a small permanent snowfield/alpine ice patch at the base of this climb with overhung aretes, a cave, and chimney features.

We wrapped it up early and started back down to the car.

The trail was only getting even icier with more traffic and refreeze. I enjoyed the traction of my microspikes, while the others had to get more sporty.

This was a great weekend with friends. It felt so good to get back on the ice and reassure myself that I’ll be able to move forward. Sharpen the tools, the hunt is on!

Two weeks later, we got another little cold snap so I returned to Heliotrope with Deb, Mike, and Evan. Two days before, Deb and Evan hiked up there and found nothing but running water. But as we started up the trail, the ground seemed colder than before and I was optimistic.

As I suspected, the awesome waterfall just climber’s right of the Hogsback trail was in great shape! Anthony and I had soloed this the year before. This time, we slung a big boulder up top and set up two ropes to top rope a few different lines that had formed.

We were all very excited to climb some quality water ice. We were Helio-stoked!

After a few laps on each rope, we moved up and right to an area further west I had not yet explored. We didn’t find any big climbs, but there was more fun WI2 soloing.

Then we traversed back eastward to Femoral Bleed. Overall, there was so much more ice than two weeks ago. I think the ground had cooled a lot, so despite the fact air temps were not very cool in the week leading up (it rained up to 7k), ice was able to form much more quickly when it finally did get cold.

Interestingly, Femoral Bleed was very thin and wet, no good for climbing. However, the climb just to its right looked beautiful. This climb, which we called “Supermarket Squid” for the intricate tentacles, was merely gushing water two weeks ago. The roles reversed for the two neighboring flows.

I scrambled around the right to the top to setup an anchor consisting of screws and tools. Then we had some fun climbing this pitch. This was by far the most fun climbing of the season with varied moves.

We were pleasantly surprised to find two climbs in great shape. Heliotrope had truly gone from zero to hero in under 48 hours. This place is truly Helio-dope.

While each individual climb may not be that predictable, this area in general seems to be quite reliable for easy, fun water ice climbing in the fall. I’ve tried to map out some of the climbs, making use of the new LIDAR data on caltopo. I’m not claiming FAs or anything, but gave some of the notable climbs names so they’re easier to reference. The map is here.