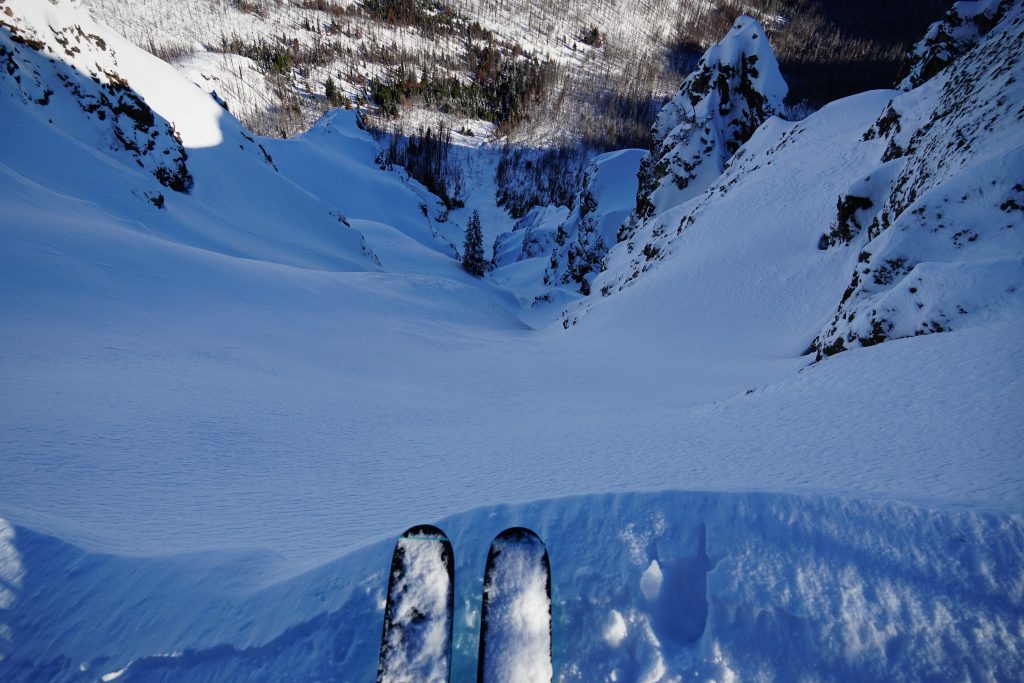 The Return of Winter

The snow gods have blessed us this fall. In just two weeks, we went from no real snow in the mountains to full on winter conditions. With rare November sun in the forecast, Sam and I headed out to the Crystal Backcountry with Daniel and Madelynn, two of Sam’s friends.

We had no real plans, but settled on exploring Cement Basin and Lake Basin. I was a complete virgin to the Crystal Backcountry, so I was just stoked to explore and test out new skis and boots in the backcountry for the first time. Peter made me some incredibly light mid-fat touring skis. I knew they would kick ass on the uphill, but I was curious about downhill peformance.

There was not a cloud in the sky as we climbed out of Bullion Baisn towards Platinum Peak. Oh, winter how I missed you!

In 2017, a large fire burned much of the Crystal Backcountry. The burn areas provide great skiing. In bright sun and a fresh winter coat, the burned glades were mesmerizing.

The first backcountry run of the year is always exciting, but usually not too good. However, this time around, we dropped off a NE aspect into perfect, low density powder in full sunlight. Is this really mid November? It felt too good to be true.

As we arced beautiful turns through the snow, it occurred to me that this was just a preview of the next 8 months. The ski season here is longer than the offseason. And this year, the season has started early, with a bang. I guess 2020 has been good for one thing at least.

Down in Cement Basin, we skinned up towards the “Wall of Pow”.

Already, we felt far away from the crowds of Bullion. On sunny, stable days, I love exploring deeper and doing a true “tour” versus just lapping powder.

I had spotted some interesting looking couloirs on satellite imagery and topo maps. We reached the top of “the Wall of Pow” and peered down some tantalizing lines down towards Lake Basin.

There are at least five or six little chutes right next to each other. They didn’t look that impressive on maps, but in person, they were incredible! Each was deep, dark, and steep. We checked out four different lines, debating the merits and safety of each.

We were mostly concerned about coverage and stability. It is still early season, so a steeper line like this might have many rocks to hit (“sharks” as skiers call them) hidden beneath a shallow layer of snow. It was also difficult to tell if some of the couloirs would not end in a cliff.

We ultimately agreed to ski one of them (the one that seemed to have the least rocks and cliffs). Snow seemed very well bonded, but I would cut the slope first. After an easy going powder run to start the day, we were heading straight for the steeps! My heart started to pound a little as I readied myself to drop in.

The top was steep, a little over 45 degrees, but the snow was mostly soft and stable. I skied cautiously, managing. There were some rocky sections, but I managed to weave between them. Full send conditions? Definitely not, but it is, after all, November still.

We regrouped partway through the line before the smallest constriction. The option here was either to sideslip and hope not to hit the edges of your skis or straight line. I chose the straight line.

The snow lower down was a mix of heavy windboard and dust on avy debris.

At the base, we skinned up to Basin Lake and oogled at all the other ski lines. This little area is truly a gem! I definitely will return for more when the lines are a bit more filled in.

We meandered back up to the and continued up towards the first summit north of East Peak, taking a long lunch break at the top.

We eyed a perfectly untracked, sheltered north facing powder bowl, one of many in the Crystal Backcountry. And here, once again, we found lovely powder turns. A good day just kept getting better.

The joy of skiing powder is simple and pure. It is a feeling of floating, flying, and flowing all at once.

We took a few laps here before deciding to head back towards East Peak. We watched others descending the north side of East Peak. Hoops and hollers and whistles, the soundtrack of the day, the music of a ski season.

We all departed from the summit together, heading down in the fading sunlight. The SW side of East Peak was sufficiently fried from sunlight and a zillion tracks, but we still skied hard and laughed, but even hard skiing is fun. Once back on the catrack, we zoomed and zipped back to the car.

This was truly a remarkable start to the season. I loved the aestethics of our “Crystal Lite” tour, mixing in chill powder and steeper lines for a tour that made sense and felt somewhat remote. Conditions resembled more like a day in mid January than mid November. While the low tide of Fall 2019 provided some unique opportunities to ice climb, I welcome Winter 2020 with open arms. Here’s to winterland, powder, and friends. Let’s make the most of it.

4 thoughts on “The Crystal Lite Tour”