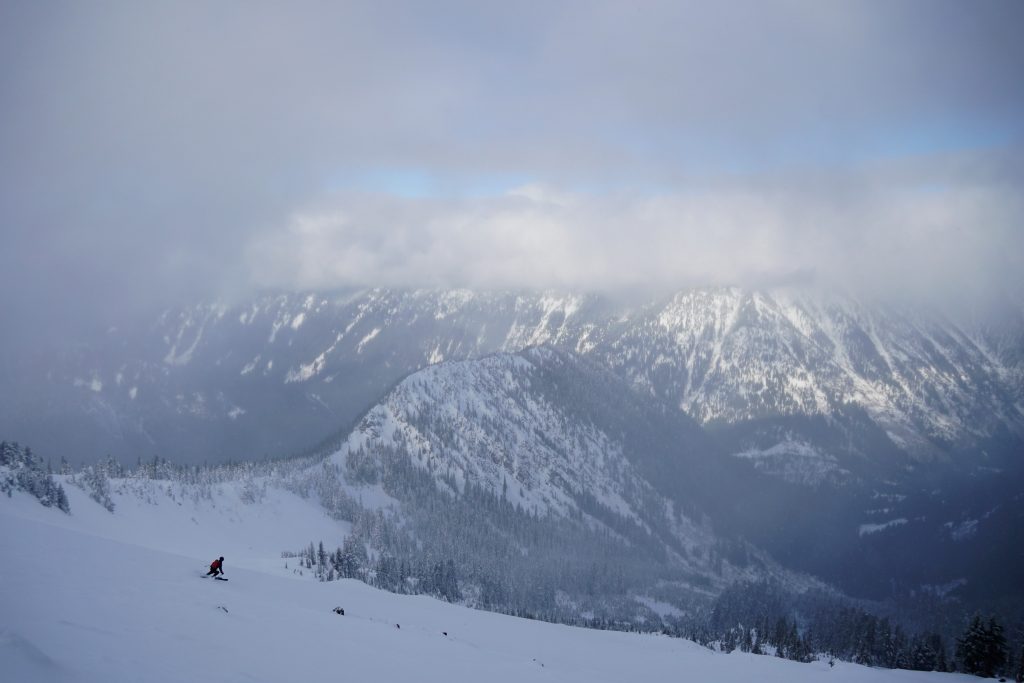 No one said Backcountry Skiing Should be Easy

After farming low hanging fruit at Crystal and Tye Peak, we decided that we needed to make life a little more difficult for ourselves this Thanksgiving weekend. Steve, Logan, Sam and I settled on a plan to attempt Jim Hill via Henry Creek. Theoretically, it would yield a 3k descent in nice north facing powder. The reality would be a bit different.

Logan and I attempted Jim Hill two years ago via Lanham Lake with a terrible icy rain crust. We made it to the upper ridge but gave up there. That experience made us curious about the more direct Henry Creek approach, which, in theory, seemed superior.

Parking is a little weird for this one, so we found a snowy pullout for our cars near the utility station.

I have to say, it was one of the weirder starts to a backcountry ski day. We skinned downhill on a snowbank next to the highway. Trucks wizzed past, the hum of powerlines was deafening, and a train even emerged from the tunnel beneath us.

We left the highway onto a snow covered logging road, but the hum of the utility plant followed us most of the rest of the day. We took the road as high as we could before heading off into a mess of partially covered tree stumps and tight forest. Soon enough, we found ourselves skinning through alder. Steve was in heaven. The rest of us were less thrilled.

When we reached the head of the valley, we were dismayed to find the entire “ski line” just a brushy mess of slide alder. Nope. No way we were going up or down that way. We looked at our phones and decided we could ascend the looker’s left side of the valley instead.

The forest was steep, but skinning was manageable. As we got higher, the snow transitioned suddenly from wet, rain-laden snow to light preserved powder. Trailbreaking was exhausting, but at least we were happy knowing that there would be some good snow above.

Around 6k feet, we crossed into the open upper bowl. There was a lot of wind effect and we decided to call it quits about 200 ft. from the top as we started to see more wind slabbing. We knew the better skiing would be found lower down anyways. So after 4 hours of climbing, we ripped our skins and started a run down from the bowl.

The snow got progressively better and lighting less flat as we entered the glades lower down. Below 5500 ft, the powder was light and bottomless, making for some super fun and playful skiing.

Somewhere on the climb up, I realized we didn’t have to go back down through the alder and could descend via Lanham Lake instead. Logan and I knew there’d be no alder that way, only a steep forest and luge track, but hey, at least it wasn’t alder. So we skinned up to the col above Lanham Lake.

There’s a nice little east facing bowl here that held wonderful snow, so we spent the rest of the afternoon taking short laps and watching the clouds slowly lift around us.

Since the objective of the day was complete, we backed off the pace and just relaxed. For once, we could no longer hear the hum of the utility plant. With this entire mountain to ourselves, there was no scarcity of powder or traffic on the skintrack. It felt very tranquil.

With wispy clouds and fresh snow still on the trees, it was a beautiful afternoon. Light was already becoming golden, even though it was barely 3 pm. We knew it was time to head down, as the Lanham Lake exit was not the easiest.

The skiing down towards Lanham Lake started out remarkably well. The snow was still good, despite the tight trees. As we reached the rain line, the snow again became crusty and thin. We navigated our way through a hilarious natural terrain park of downed logs covered in a small amount of snow. Last time Logan and I skied this, I was terrified, but this time, I was able to laugh and have some fun.

From Lanham Lake, we followed the snowshoe trail down to the Nordic Center. It is narrow, deep, and fast. Controlling your speed or turning is difficult. You end up picking up tons of speed and yearning for spots wide enough in the trail just to check your speed. We like to refer to these trails as “death luges”. Last time, it was so fast and ugly that, after a few crashes, I simply had to walk out. But two years makes a big difference, and I was able to manage my speed this time around.

We broke out to the Nordic Center in a swarm of kids and sledders. We kept our skis on all the way to the car, sliding down the snowbank on the side of US2, just like how our day started. The utility plant was humming just as loud as before.

While it was certainly a month or two early for prime conditions on this tour, we still had a great day. Jim Hill (aka “Jim Hell”) reminded me how I still love adventure skiing – type 1.5 fun. It’s like a preview of ski mountaineering season when we suffer and struggle and dive deeper into the Cascades. Come May, I think I’ll be ready.