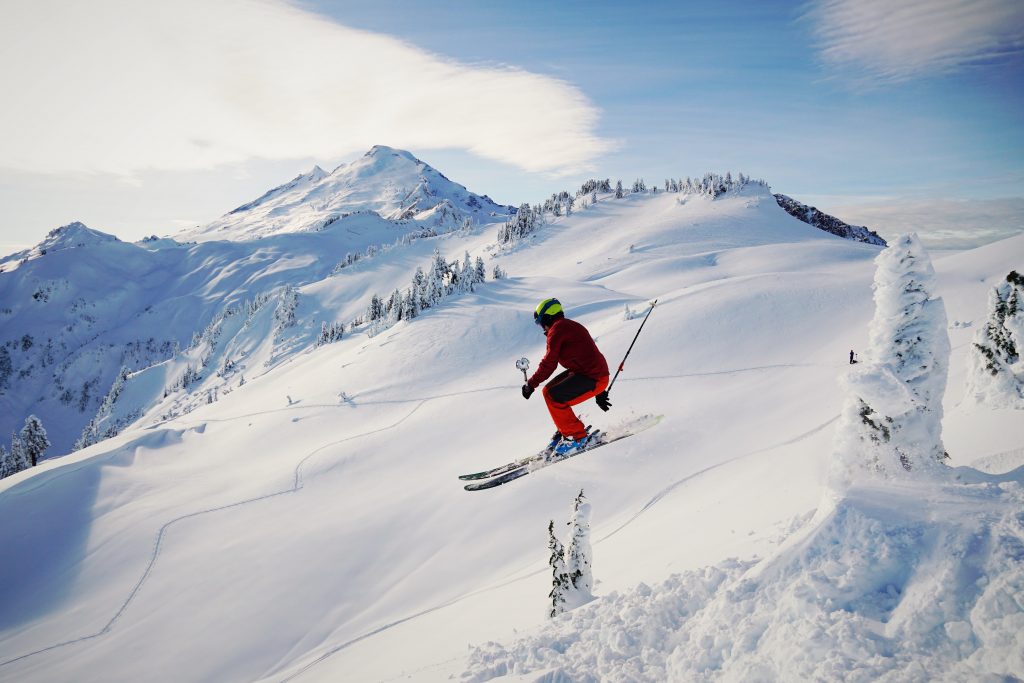 Return of the Baker Booter Boys

For the last day of our Thanksgiving ski vacation, Sam and I headed up to Baker to join Jon. We heard reports of light, non wind effected snow and good stability. Even if the snow wasn’t perfect, sunny days in the Baker Backcountry are something else.

We began with the basic skin to Artist Point. From here, Video Peak looks so prime, so it has always been a mystery to me why more people don’t ski it. Last year, Jon and I had a fun day out there.

As we skinned to Ptarmigan Pass, the wind picked up and was howling pretty well at the pass. It was clear that the reports of non wind effected snow were obselete.

We skied windboarded snow down a short run and started up to the next pass on Ptarmigan Ridge. Our original plan was to head out towards Coleman Pinnacle and get really deep, but with the wind blowing at a sustained 30-40 mph, I expected our plans to change shortly.

At the next pass, the wind was simply howling. Ice crystals stung our face and danced in the glaring sun. It was both enchanting and horrifying. I snapped some pictures and we continued onwards.

We summitted a little bump further on the ridge and took a quick run off to the NE before finding a break from the wind in a nice protected meadow. We could finally take a break and reassess our plans for the day. We knew that the best snow would be in the sheltered Bagley Lakes Basin so we decided to make our way back via Video Peak.

As we crossed onto an east aspect, the wind became gentler. We saw a nice looking run eastward off the peak just south of Video Peak (we called it VHS Peak). The snow was fast and fun, and not too wind effected.

Being around Jon and watching Jon ski always makes me a better skier. He likes to tell me:

Or the mountain will attack you.

The aggressiveness pushes me through the front of my boots and helps me drive my skis. My skiing has come a long ways since we started skiing together two years ago.

We began a lazy skintrack up to the true summit of Video Peak. I love the position of Video Peak, aloof on a island in the sky between the giants, Shuksan and Baker. Jon and I theorized about different jumps with all the complex terrain. Finally, we reached one spot that looked oh so perfect. Steep landing, perfect runout, and sweeping views of Shuksan and Baker. What do you do when the snow isn’t the best? Build a kicker!

We built a kicker on the Bonnington Traverse, but have never built one in the backcountry here. It actually doesn’t take too long, maybe 30 minutes or so. We a good run up and steep landing, we knew the we’d get good air. Meanwhile, Sam scoped for the best photo angle.

Finally, after a few runups, it was time to go for it. The takeoff was fast and the landing was absolutely perfect. After a few attempts, we perfected the jump for maximum air. The results were stunning.

I believe that vision is crucial – not the ability to see what is front of you, but the ability to envision what could be. Vision is essential for crafting unique experiences in the mountains, whether it is a new traverse or a beautiful capture like this. We had the vision to see this shot and executed it perfectly. Well done, gents.

After quite a few laps on the kicker, clouds were moving in and we knew it was time to get going. So we tagged the summit of Video Peak and found surprisingly wind sheltered snow off to the northeast.

It was only a long winding skin back to Artist Point and some surprisingly untracked snow off the north side of Table before we returned to our cars. My legs were tired, logging over 5k ft. gain each day over the four day weekend. But I felt like we made the most of the great early season conditions. In some ways, it almost felt like a mini ski season in one long weekend, complete with deep powder, steep couloirs, bushwhacking, and good old fashioned aerials. The 2020-21 ski season is off to an incredible start. I’m so thankful for Snovember, great partners, and beautiful places to explore.