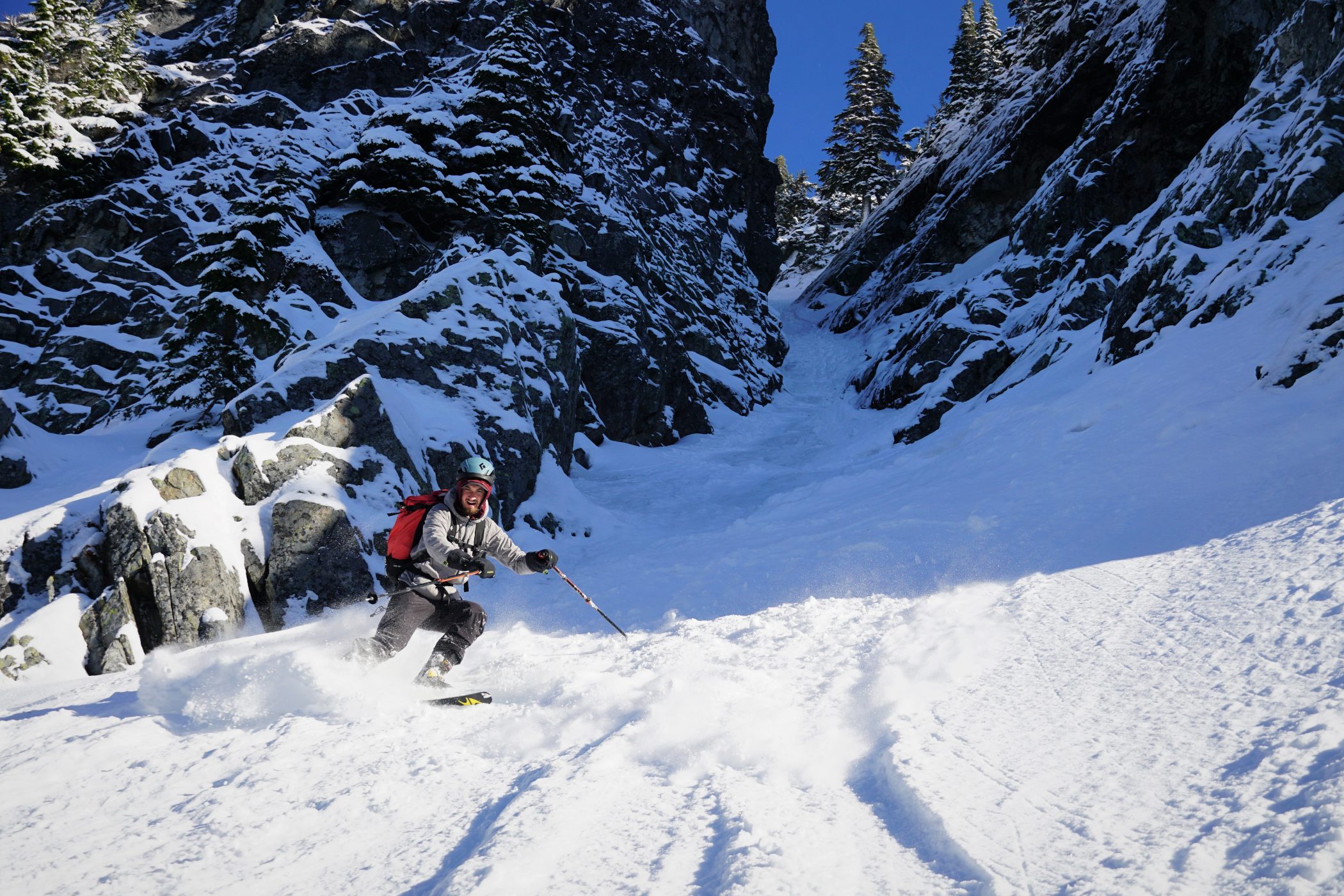 Two years ago, returning from Holy Diver Couloir, Logan and I spotted the relatively obscure Oyster Couloir on Wright Mountain. It stuck in our minds as a cool line, but there is very little information about it. In fact, there is only one online report of someone skiing it, and there’s no mention about how wide or steep it truly is. It is still early season, but the Slot and other couloirs have been in a for a while, so we figured we’d give it a shot. Would we crack the Oyster?

It was a bright bluebird morning as we left Alpental. Unfortunately, Sam’s toe piece on his binding ripped out of his ski before we reached Source Lake, so he had to head home with a broken ski.

There was about 6 inches of extremely light snow on top of a stout rain/ice crust. The new snow was not bonding well. Skinning was challenging and our skin track kept blowing out. Ski crampons would have been helpful.

We caught up to a few groups of ice climbers approaching the Northeast Buttress of Chair. The crux step was surprisingly in. After briefly chatting, we turned right and booted up the gully to the north slopes of Chair.

A cold wind chilled us so we transitioned quickly and began to cautiously ski the north slopes. There was lots of sluffing and little loose dry avalanches running. The skiing was mostly good, especially the middle section where we barely felt the crust.

Down at Snow Lake, we enjoyed the peace and warm of the sun. The lake appeared to be solidly frozen, despite others warning us it wasn’t safe to cross yet. Regardless, our plan was to go all the way around Chair to get out via the Chair Circumnavigation.

We meandered our way up towards Gem Lake, encountering some challenges with the early season snow coverage. Eventually, we traversed all the way to the summer trail and simply followed that.

Kaleetan looked absolutely absurd, as always. Whenever Logan returns from Montana, he comments on the incredible ruggedness, even of our “lesser” peaks in the Snoqualmie area. The terrain potential here is seemingly infinite.

I love the freedom of winter – forging our own paths, exploring, and discovering. With a stable snowpack and good weather, you can go most anywhere your two feet can take you.

There was not enough snow to ski down the north shoulder towards the entrance of Oyster Couloir. Getting down into the couloir took some tedious down scrambling on snow covered boulders. We gladly welcomed the security of a veggie belay.

We slipped on our skis and cut the slope entering the couloir. The top layer of powder promptly sluffed off and careened down the couloir. So much for our hopes of powder turns!

Now that we were in the couloir, we could finally see it. It is truly a blind entrance. It looked pretty narrow, maybe ski width, but seemed like it would go?

I continued to side slip down the firm icy slopes until a constriction. It was about 45 degrees and barely wide enough for my skis, but the shape of snow provided pretty minimal edge contact and was not very comforting. Maybe I could have kept going, but I’m not very good at these things compared to Logan, so I made the call that I would downclimb until it got easier.

I managed to take off my skis and transition to booting. The snow was really icy, and I had to kick hard to get boot purchase. Lacking an ice ax, I jammed my ski edges into the snow for security. It felt very secure, but was just very tedious and slow.

The couloir curved but never really relented to a point where I could comfortably put my skis on. So we kept slowly downclimbing, probably a total of about 200 ft.

Finally, it opened up and we could put our skis on again. Our legs were pretty tired from kicking and downclimbing, but we were glad to be skiing again.

We continued through the lower couloir, which is a cool forest gully. Unfortunately, the very last bit ended with a running waterfall. We took off our skis once again and did one last annoying downclimb, clinging to alder boughs and underwater holds in the rock with our bare hands. It felt like the most Cascadian thing ever.

Finally at the apron, we tried to put on skis once again, but ice from the waterfall had formed in our toe pins and bindings. I said screw it and just skied down holding pressure beneath my boot to keep my ski in place, just wanting to be done with the descent. I made it down, but not without a few wipeouts.

We reached the bottom utterly exhausted. It had taken us 1.5 hours to descend just 1500 ft. from the summit. We realized our plans of doing the entire Chair Circumnavigation were rapidly fading in the afternoon light. A Snow Lake exit seemed imminent.

We were able to clean out the ice in our boots and bindings, down some food, and began on our long return trek. The wind howled above us, blowing plumes of snow around the high peaks. I had forgotten how wild this valley is, lined by steep rock walls and littered with ice smears. It’s dark, and at the same time, inspiring.

We reached the saddle above Snow Lake and felt the wind blast us. Clouds were pouring over Snow Lake Divide from the Alpental Valley. It was hard to tell where the lake ended and the clouds began.

We skied down to the lake and began the classic skin across. The last time I did this was when we exited Holy Diver, two season ago. I’m so much a different person than I was then, but the feelings of this setting remain the same – they are raw and tactile. The wind tears in your face, clouds spilling, spindrift swirling. We could be anywhere deep in the Cascades, for all we know.

This was a day where we bit off a little bit more than we could chew. But we battled through it, made safe decisions, and are stronger for it. Some may call us ambitious or stupid to try a line like this so early, and maybe we are. But we had no way of knowing, so the only way to know was to go. Days like these are tiring, but pay dividends in the long run. After a winter of being battle tested by Snoqualminix, doing something like the Isolation Traverse in a day doesn’t feel so impossible. Snoqualmie has everything you need to to become a great ski mountaineer. It is a training ground like no other.

Down at Source Lake, we saw the first skier we had seen all day since we left Source Lake. The slopes above it were, obviously, bombed to oblivion, but those skiers had all since disappeared. They say more people will be backcountry skiing this year, but I more think there will just be more people sipping beers while sitting on the tailgate of their pickup trucks.

Even though the Oyster was not “in”, it was still a rad adventure with one of my truly best friends. Someday, we will go back in ski it in fatter conditions. Fear not, there’s never a shortage of adventures to be had in the heart of Snoqualminix.