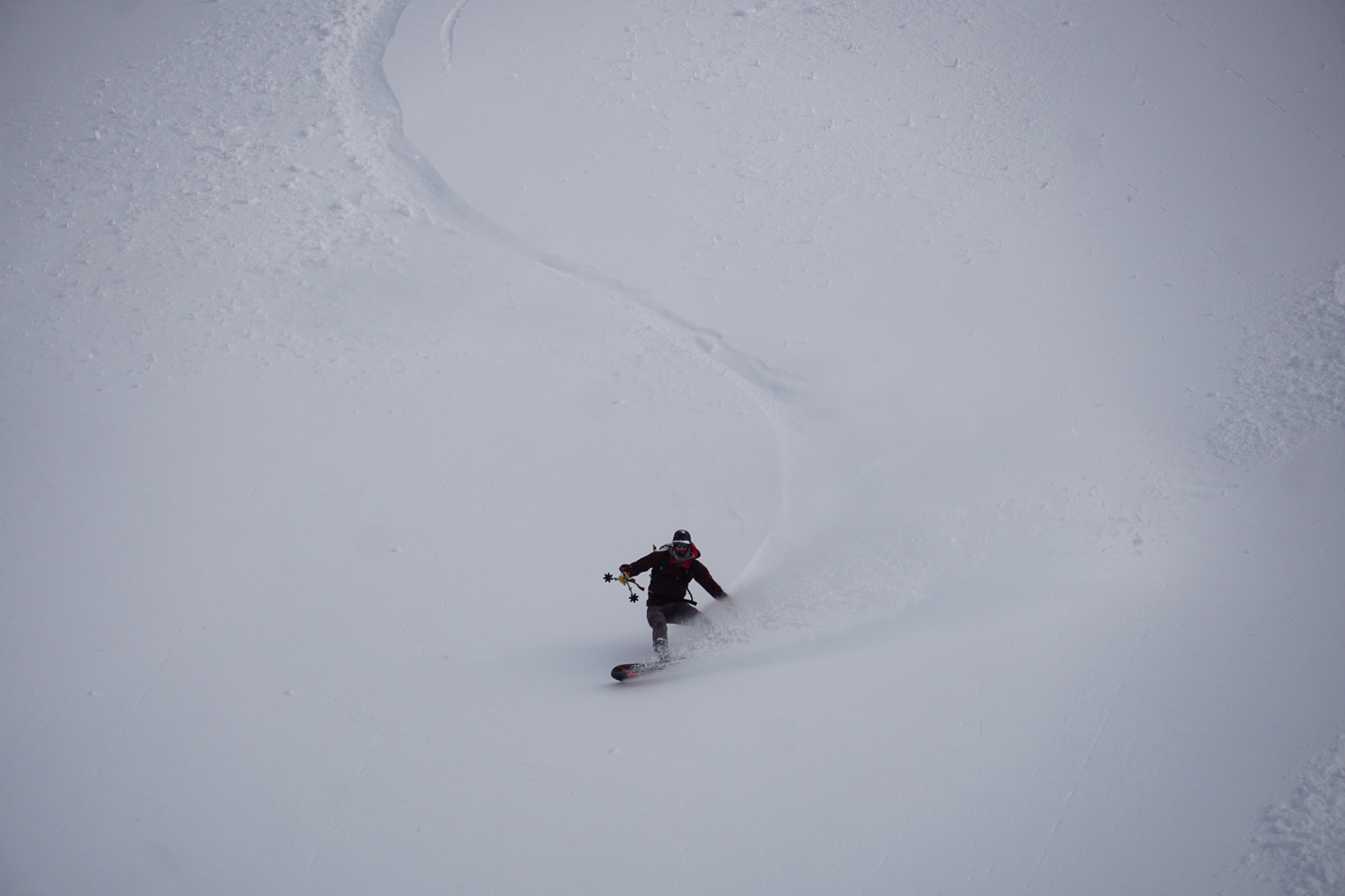 When Plan B gets an A+

Sam, Will, and I headed out into the Snoqualmie Backcountry with plans to ski the Chair Circumnavigation counter clockwise, with possibly a summit of Kaleetan. Logan, Kylie, and I did the clockwise Chair Circumnavigation two years ago, getting thwarted by a cornice on Kaleetan and generally beaten down by breakable crust. Going the other direction this time, we would get entirely new ski runs, and hopefully a new summit.

It was snowing pretty hard during the entire approach, but the forecast called for partly sunny skies by the afternoon. Quite a few other parties had the same idea for the day.

Somehow, we passed all the other groups and I found myself breaking trail up to Chair Peak Lake. The weather seemed doubtful, as it was still snowing hard with no visibility. But as we climbed up to Melakwa Pass, the snow stopped and the sky began to clear quite quickly.

From the pass, we looked across at the slope we would have to traverse to gain the south face of Kaleetan. It looked pretty cross loaded by wind, so we decided that Kaleetan would not be a safe option. On the way up to the pass, we got a nice view of Cupcake Couloir, a line that descends from the shoulder of Kaleetan down to Chair Peak Lake. We decided to give that a go.

It was only about 300 ft up the ridge from the pass to the entrance of Cupcake, but this 300 ft did not give itself easily. We booted on top of bushes covered in snow and grabbed tree roots to get through cliff bands. Sometimes Snoqualmie feels more like Snoquomton – rough and tough.

The entrance to Cupcake Couloir is really just a wide bowl. The snow looked surprisingly good and not wind effected; a non-reactive cornice cut confirmed this.

The snow in the main part of Cupcake was the best snow I’ve ever skied in a couloir – but then again, it might be a stretch to call this wide line a couloir. It was fast, light, and bottomless. Snoquomton, meet Snoqualminix!

We were all stoked down at Chair Peak Lake. Our earlier disappointment of not skiing Kaleetan was completely erased. Instead, we discussed our next plans: should we lap Cupcake? Or perhaps… Little Alien?

Little Alien is a tiny little slot couloir above Chair Peak Lake, on the south side. I have wanted to ski it for many years. We figured the snow might be similarly wind sheltered.

We skinned as high as we reasonable could and then started booting. It was a booter for the ages. I was hip deep in light powder and still not hitting the rain crust beneath. Progress was extremely hard, but I pushed on. Eventually, we reached the final constriction. The snow simply became too deep to move, and the only way I could move forward was to excavate the entire slope, at which point there would not be any fresh snow to ski, so we decided to call it quits there.

The snow was steep and deep! We skied down to the lake in a single run, hollering the whole way.

We wanted to give Cupcake another go, but Will had forgotten a headlamp and we did not want to be caught out in Snoquompton after dark, so we just took one more little short lap down to Chair Peak Lake from Melakwa Pass.

By this point in the day, all the other groups doing the Chair Circumnavigation had come and gone from this zone. Once again, the backcountry was completely empty. There are an abudance of awesome little lines here: Kaleetan itself, Little Alien, Cupcake, and various lines on Roosevelt. Call it the Chair Peak Adventure Zone.

The sun was finally coming out between mesmerizing cloud layers. While bluebird days are nice, days like these are truly special, in my opinion.

As we descended into the Melakwa Valley, we passed by the Melakwa Flows, where Jacob and I climbed a new route two years ago. I had not been here since. The valley still takes my breath away: two giant peaks loom above with icy walls on either side. If Chair Peak is the queen, then Kaleetan is king, mysterious in exile. There is something powerful and regal about this place.

We reached Melakwa Lake and started skinning up to Bryant Col. Soon, Hot Tubbs on Bryant Peak came into view. Two years ago, Jacob and I climbed this new multipitch route on little more than ambition and belief. I’ve done bigger or more technical climbs since, but Hot Tubbs is arguably still the most important climb of my career – it was the day that I realized that anything is possible. Returning two years later in person, it somehow doesn’t look quite as long or hard as it felt in the moment, but it was a huge accomplishment for me at the time, and maybe that’s why it looks so big in my memories.

As we reached Bryant Col, we gazed off into a sea of clouds. Easterly flow had moved up the Alpental Valley, and the world fell off into an ocean beneath us.

Bryant Couloir was pretty tracked out, as expected for low hanging fruit in the Alpental valley. We skied down into the whiteout, savoring every bit of visibility before it was gone.

Near the bottom, we entered the inside of the ping pong ball. We could not see the ground or which direction was uphill. So we skied by brail down to Source Lake before exiting the typical track.

Typically, I plan days out like a script and execute them precisely. But then there are days like these, where plans go out the window and we wander off script, acting out of the heart, and listening to what the mountains are telling us.