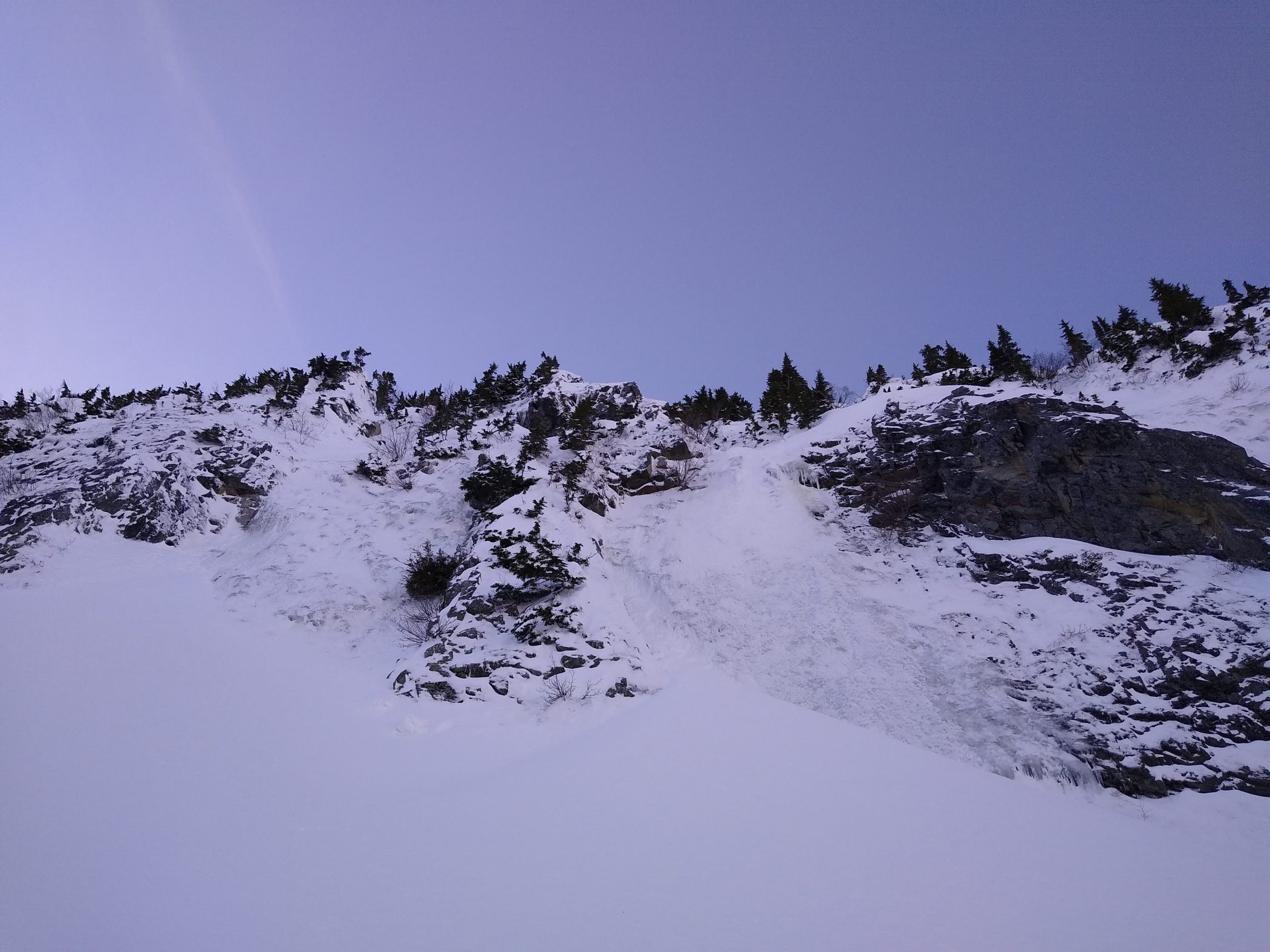 A Walk With the Tools

During March 2019, Logan and I spotted a series of fat single pitch ice flows in the valley between Roosevelt and Wright Mountain as we were returning from the Holy Diver Couloir. There were 6 or 7 WI3 routes right next to each other. I had never seen so many moderate routes so close together in Washington. I took note and planned to return someday.

I have the week between Christmas and New Years off, so Doug and I made plans to hunt for ice one day. We both knew, from recent exploration, that the ice around Snoqualmie was very immature and looked highly aerated from snow. Low expectations are key for a Washington Ice Climber.

We skinned to Source Lake and up to Snow Lake Divide. As we got down to Snow Lake, we left behind the easterly flow fog and broke into sunny, chilly skies.

We slowly made our way up to the saddle between Wright and Roosevelt.

We did an easy descending traverse along the base of the slopes until we were beneath the climbs. They looked better than we expected, but still super aerated and we could tell that the ice was bad beneath.

There are four climbs, from left to right, before a wide snow gully. Looking up this snow gully, it divides in two directions with climbs above on both sides. On the right side of the snow gully, there are a few more climbs, but they were less formed so I didn’t take any pictures.

We knew the ice would be rotten, so we decided to poke around at climb #4, the thin gully feature, since it looked low angle (70-80 degrees briefly, then easing off to 60 or less). It’s really nice how you can ski nearly to the base of these routes. The overhead hazard isn’t bad and the climbs sit in the shade all day. Yes, the approach takes a few hours, but it is very tame. We remarked how incredibly relaxed this all felt for ice climbing in the Cascades.

Doug took the lead and actually managed to get some decent screws in on the left. The ice was mostly bad, with a few ok spots. He frequently swung through to rock. All the snow sitting on the ice (aside: how does snow stick to near vertical ice in the Cascades?) definitely has damaged it a lot.

Doug went out of sight as the climb relaxed its angle. His progress slowed and I heard him yelling something about a crampon falling off. A few minutes later he yelled that he had it back on and continued upwards. Good thing this was an easy climb and the ice was soft!

The pitch ended up being a tad bit longer than 60 meters and I had to simul a little for Doug to reach a tree anchor. The climbing was quite fun for me with a top belay, but I definitely would not call it quality ice climbing. I think this pitch would be an awesome WI2+/3- climb when the ice is fat.

Above the pitch, Doug and I ate snacks and gazed at the upper tier. There were some sweet curtains forming and multiple gullies snaking to the upper ridges with lots of potential.

The wind was incredibly non existent all day. Temperatures were mild. Nothing was falling on us. It felt almost too tame for ice climbing in Washington, but neither of us were complaining.

We had the idea of trying to rap into climb #3, the wide curtain. We found a good tree but knew we would have to find a lower tree for our 60 meter ropes to reach the ground. I rappelled about 15 meters but could not find a suitable tree lower down, so I just ascended back up the rope and gave up on the idea. Then we booted down the snow gully (climber’s right of climb #4) and back to our skis.

We agreed that none of the other climbs would be reasonable to lead in the current condition, so we headed out. The temperature on Snow Lake was at least 20 degrees colder than elsewhere (might it be the coldest spot in Western Washington?). At Snow Lake Divide, we were treated to a beautiful sunset over the fog bank, which had not budged all day.

We did not climb much on this day, but it was still fun to explore a new zone on such a beautiful day. I think this zone has a ton of potential and is worth the approach when the climbs are in.