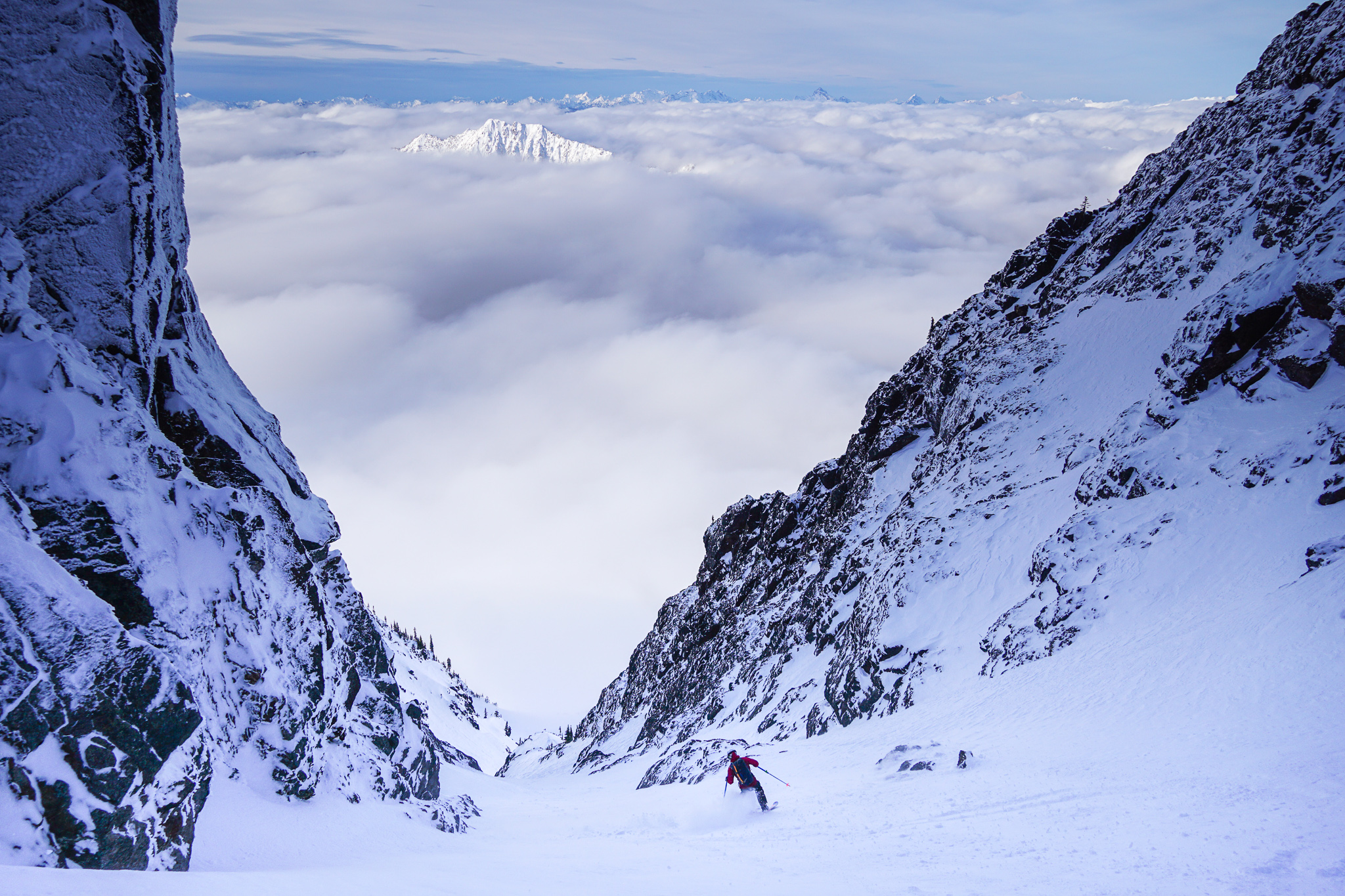 Hooked on a Feeling

On a clear day, one can gaze off from the Steven Pass ski area to the east at the massive Chiwaukum Range. At the high point of the range, two couloirs split the ridge. I remember seeing these couloirs for the first time three years ago, when I did not even know how to kick turn. But I knew that someday, I would ski them. There are only so many times you can look at a line like these and wonder what it would be like to be on the other side of the looking glass. Eventually, curiosity will get the best of you.

Our 2020-21 ski season got started early. After some great mini-adventure days early season (Commonwealth Triple Double, Sheep Lake Couloir, just to name a few) the tap turned on and rain in the semi-solid state fell from the sky in sheets. As the dust settled, Nick and I made plans for the first real adventure day of the season. Usually, in early January, we are just happy to make it to Source Lake without taking our skis off. But with the extended season already in the books, we were chomping at the bit, ready to seek bigger lines.

Nick and I drove in early Saturday morning to the Cascade Meadows Camp. If parking here, please consider paying to park to support the private plowing of the road so we can preserve this great access point. We got started under 6 am starry skies, which really was not that early, but the darkness made it feel like an alpine start to a big day.

After two miles of road, we entered the forest with adequate coverage. The trail is easy to follow and the skinning was quite easy with rolling ups and downs. There were plenty of open creeks, but all were jumpable with a little bit of acrobatics and the skins never got wet.

Five miles in, we reached the point to turn off and start the long ascending traverse towards Big Chiwaukum. We lost the trail here and there, but the snowpack was deep and it did not matter. Easterly flow fog started to follow us up the valley, but we stayed just above it. Days like this have a slow start, so we talked about all kinds of topics to stay distracted as the morning awakened. One of the most important qualities of an alpine partner is the ability to endlessly talk about a wide array of things to pass these long approaches and descents. They also have to know when to shut up. Nick has both of these qualities.

Finally, about four hours in, we caught a glimpse of Big Chiwaukum and the NW Couloir. After meandering through a nice forest, the size of the terrain ahead of us was an incredible contrast. We started to get really excited.

The west side of the Chiwaukum Range is not frequented by backcountry skiers. It gave us a new perspective on familiar friends, like Jim Hill. The north side of Jim Hill is a classic Stevens tour, but the backside was simply jaw dropping.

We relished brief moments of morning sun on a very cold day. They would turn out to be just about the only rays of sun we would get all day.

Finally we entered the giant basin beneath the NW Face of Big Chiwaukum.

We had a few options here. Our main goal was to ski the looker’s right couloir, which is longer and narrower. The left couloir looked more wind effected and the topout did not seem that filled in. Going up the right couloir gave us the advantage of assessing stability on the way up and getting a detailed view of what we were going to ski.

The entire basin appeared pretty wind scoured. We dug a pit near the base and found about 50cm of wind compacted snow on top of the rain crust. It was very uniform and well bonded to the rain crust. A compression test revealed no fractures or propagation. It seemed pretty locked up. It looked like the right couloir had a small crown, so it likely slid recently. All of these factors made us feel comfortable with continuing on.

We skinned the firm snow to the base of the couloir and started booting up. The bed surface from a previous shallow wind slab made for easy booting down low in the couloir.

About halfway up the couloir, boot penetration became deeper and our progress slowed. We both felt worked by the long day just to get here, but each time a new mountain appeared in the distance, floating in the sky, it reinvigorated us. Sloan! Dakobuddy! Chimney Rock! Monte Cristo! Familiar friends.

After 1200 ft of booting, we crested the top of the couloir and gazed out onto the high Chiwaukum Plateau. This range is incredibly alpine, lofty, and beautiful. It is like a Poor Man’s Enchantments, always overlooked. There is so much good skiing in this range, from the classic Chiwaukum Traverse to the fertile powder fields above the Alpine Lakes High Camp.

It had taken us 7.5 hours, as long as normal day tour, to this point. We continued to a sunny spot about 50 ft below the true summit of Big Chiwaukum. We were too tired to consider the snowy class 3/4 scramble to the true summit. Technically, you could say it was my second attempt on Big Chiwaukum (first was a late fall frozen bushwhack adventure) and both times I failed. That is how you know I am not a peakbagger.

To the east, the Chiwaukum range dropped off into an ocean of clouds. And to the west, we could see a sliver of Puget Sound and the skyline of the Olympics. From sea to shining sea – the Chiwaukum is truly one of the best vantages in the Cascades.

Even in the sun, it was bitterly cold, so we transitioned and entered the top of the couloir. The top bit was a little rocky, necessitating some carefully placed jump turns, but it opened up pretty quickly.

Once through the top few hundred feet, we reached that beautiful bed surface. It was far from blower pow, but it was about as predictable and smooth as one could ever hope for an in alpine couloir – like a groomer at the resort, but set in the most wild of places.

The NW Couloir of Big Chiwaukum is not the steepest or longest line. The snow conditions were not all time. But the feeling of carving wonderful turns down the snowy gash in the face, above an ocean of clouds and an archipelago of peaks, was truly all time. Sometimes, we get distracted by how a mountain looks, or its stats, and we forget that what really matters is how a mountain makes us feel: vast, alone, and inspired.

As we exited the couloir, we finally entered that pesky fog we had evaded all day. We started a long traverse, losing thousands of feet, dodging trees, jumping creeks, and making it nearly all the way to the valley floor before finally running out of elevation and needing to put on skins.

Back in the valley, we skinned back down the Whitepine Trail. It always sucks having to skin both ways, but at least it was faster on the way out. We reached the trailhead, ripped skins one last time, and shuffled our way back to the car just before dark for a 10.5 hour roundtrip.

There is no way to disguise the truth – it was a big effort to ski one line. It took us most of the day just to get to the top of the couloir, and we had to skin much of the way out. But to us, it was undoubtedly worth it. Even as I evolve (or devolve, depending on your opinion) as a skier, finding more enjoyment in simple things like lapping East Peak, I know that my roots are as an adventurer. Skis will take me to wild places at times of the year that I never before thought possible before. Big Chiwaukum in early January – where will we explore next?