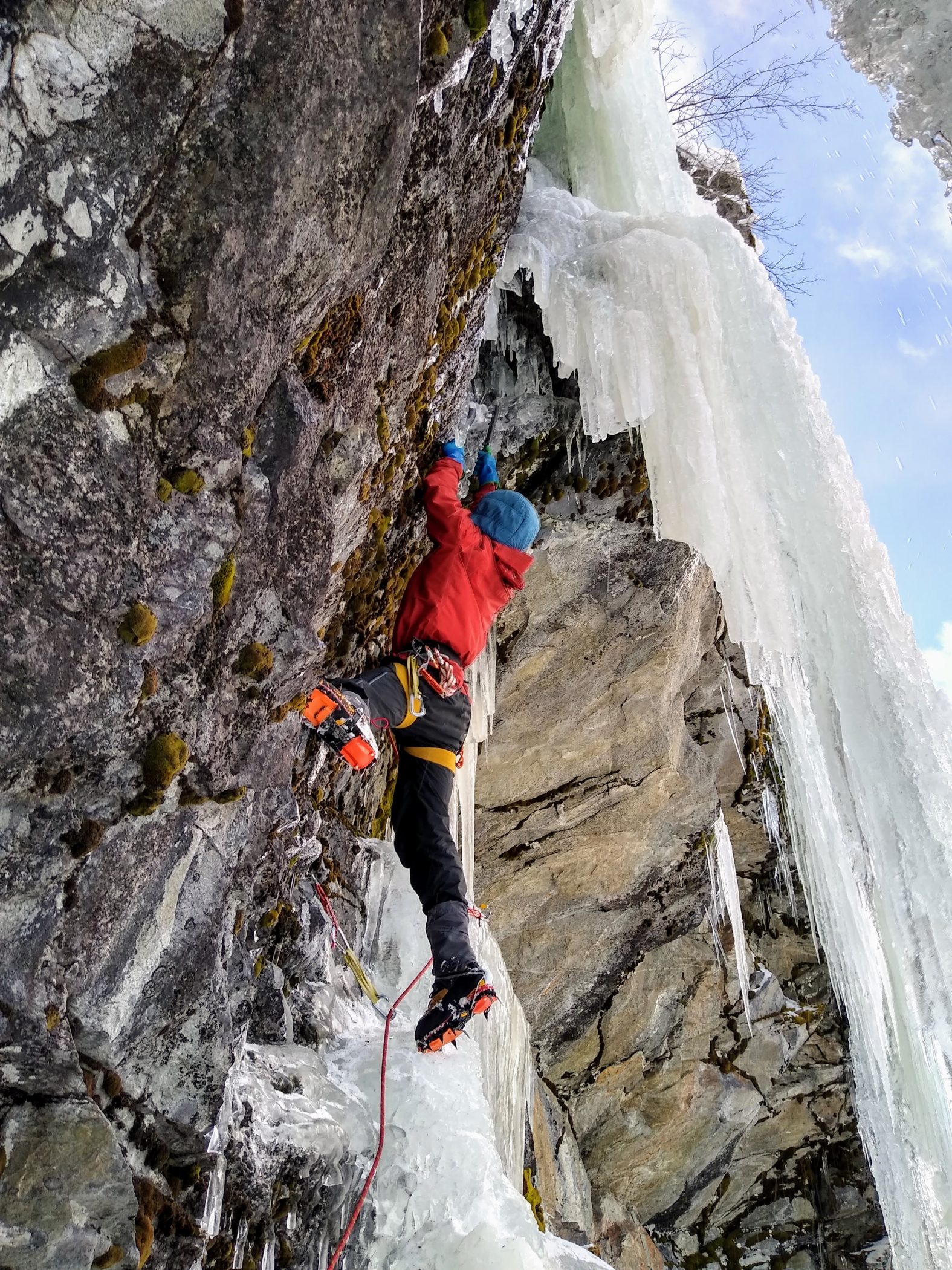 Are we still in Washington?

Although 2020-21 has been an awesome ski season for me, my ice game has been lackluster. The snow came in early and thwarted any late fall alpine climbs. I was recovering from an oral surgery during the prime alpine window in January. And since then it just snowed more and more, which I cannot complain about because the skiing has been great. So I have taken a relaxed attitude to ice climbing this season, reminding myself that one lame season is barely noticeable in the long run. And after Sloan last year, maybe a chill season of ice is exactly what I need.

Over the last week or two, La Nina finally delivered the promise of cold temperatures and lowland snow. Ice climbers emerged from their holes and started hunting. There were some notable successes at Skookum Falls, Exit 38, and Banks Lake, but most were a little beyond my ability level right now. But then my friend Josh told me about a crag off Whitepine Rd, just east of Stevens Pass. I jumped on the opportunity to get out and climb some before a (much needed, for the sake of our snowpack stability) Pineapple Express hit.

I met Josh and his friends Jaysen, Adam, and Derrick at the Whitepine Road and we hiked the short 15 minute hike up to the crag. For more info on the actual approach and climbs, see the Mountain Project Page Josh submitted.

The cliff band is tucked away in a small west facing alcove. There are a bunch of pillars 40ft or so tall. The quiet, unassuming position of the climb and general ambiance reminded me of the Bear Spirit in Canmore. I was immediately enamored.

One can scramble around to the left to set up top ropes, but Jaysen and Josh both elected to lead a few routes to start the day. Along with Adam, they had climbed here the day before and cleaned up the chandiliered ice a bit.

We quickly had three ropes set up and jumped between various routes. The climbing was steep and a little delicate, but very fun. It was so nice to be able to climb steep, solid ice in Washington, without fear of avalanches, poor protection, or long approaches. Throughout the day, we kept asking ourselves: are we still in Washington?

The day before, Josh had projected this challenging mixed climb onto a free hanging pillar. This time around, he flashed it on lead! It was an inspiring lead to watch with very committing moves but good gear.

We all took a turn on this engaging mixed route, which Josh named “Doctor’s Orders” (WI5 M5) because when he got down, he said “that was exactly what the doctor ordered”. It was some of the most challenging and fun climbing I had ever done. I pulled the crux with a surprising ice-rock chimney move. There is a point when you look back and realize the ridiculousness of it all – climbing with sharp points on all four limbs up an overhung cliff onto a free-hanging icicle. People are pretty awesome – or crazy, depending on your perspective.

At one point, there were twelve people at the crag, but it never felt crowded. We had ropes up all the over the place and it was great to see so many Washington Ice Climbers out and having a great time. Perhaps we are seeing a renaissance of #waice? We certainly are seeing a mixed Renaissance with guys like Wayne, Josh, Kyle Willis, Kurt Ross, and the Cult of Tom (Bernie).

By the end of the day, it was just the five of us once again. We had climbed until we could barely hang on to our tools anymore. The stoke was high. Who knows if these pillars will survive the next Pineapple, so you gotta make the most of WA Ice when it is good.

Overall, this was the best singular day of pure ice climbing I have done in Washington. Alpine routes are definitely still my jam, but it is so much fun to be able to concentrate only on the technicality of climbing and be immersed in the movements. Big thanks to Josh, Jaysen, Adam, and Derrick for such a rad day!