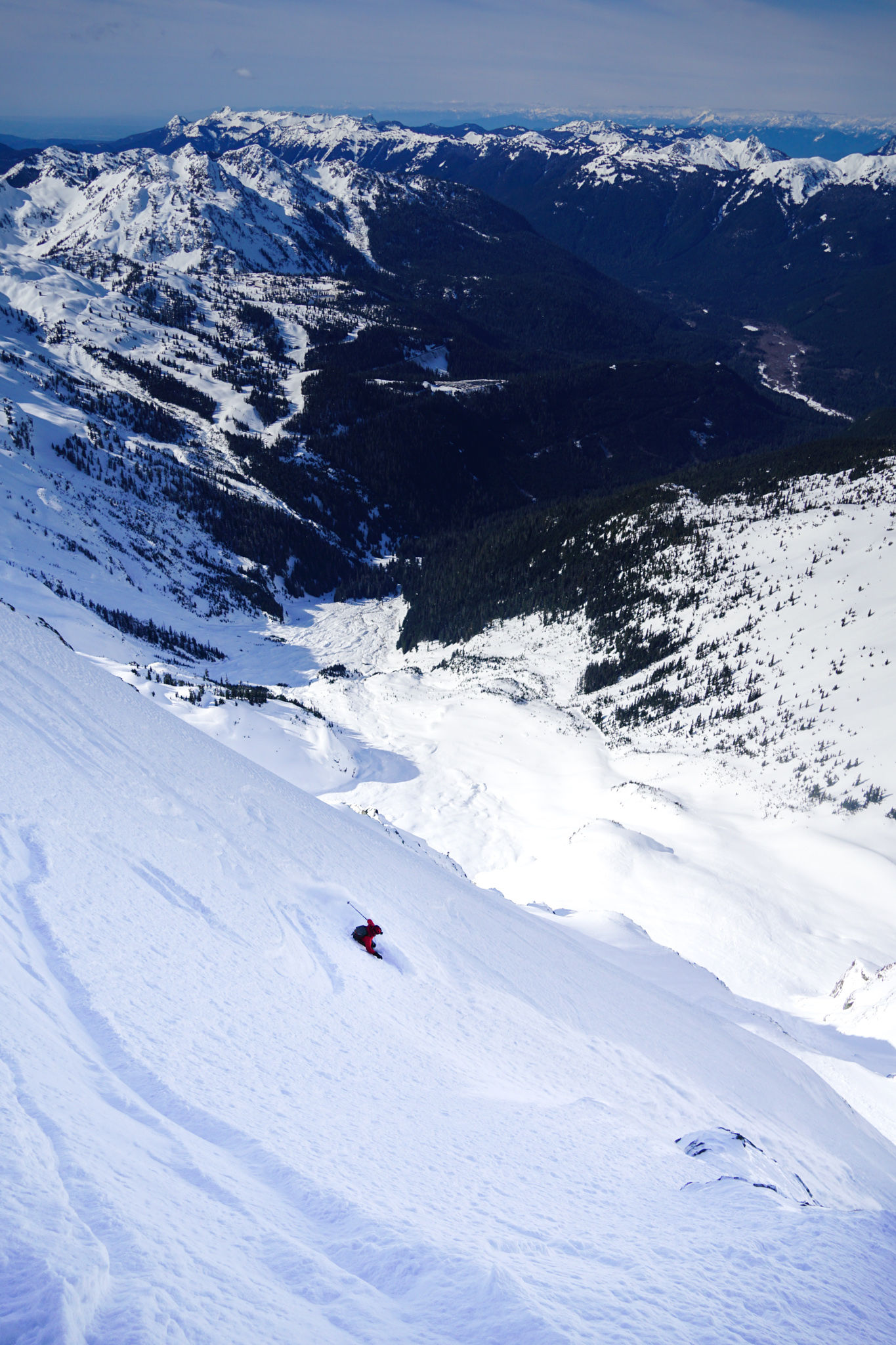 Stepping onto the Steeps

The North Face of Shuksan, towering 5000 ft above the Baker Ski Area, is undoubtedly one of the greatest spots in the North Cascades. It has a rich history of steep ski descents and classic alpine climbs. Recently, one particular line, the NW Couloir, has been gaining widespread attention. Pro skier Cody Townsend skied it last year, bringing it to the national stage. The NW Couloir is big, proud, and committing.

This winter has been unusual in the Cascades with frequent storms and most notably, a wicked persistent weak layer problem. We have seen avalanches rip through old growth trees and highways shut down because of danger. It has really prevented most of us from skiing bigger terrain, but the beginning of March brought a few weeks of quiet weather. The setup seemed ideal, so Will, Anthony, Sam and I made plans to go check out a potential descent of the NW Couloir.

It was a beautiful morning at the White Salmon parking lot, catching sunrise on the yonder peaks.

The descent down into the White Salmon drainage was the usual weirdness, skiing breakable crust and jumping over glide cracks.

At the base of the White Salmon, the summit of Shuksan towers 6000 ft above. The setting is huge and intimidating.

The skinner up the White Salmon Glacier was ridiculously steep, but we still made good time and soon crested into the sunlight beneath Winnie’s Slide.

The snow, even up at 7000 ft, was remarkably light and not wind effected. While it has begun to feel like spring in the lowlands, north aspects in the mountains continue to hold beautiful, dry powder. The skiing on the White Salmon would be excellent, if we chose not to ski the NW Couloir.

We continued onto the Upper Curtis and then began the downward traverse across Hell’s Highway. For those heading straight to the NW Couloir, it is easy to simply skin from the Upper Curtis onto the Hanging Glacier.

There was a little breeze on the Sulphide Glacier, keeping us cool. I skied the Sulphide two years ago in spring. It makes an excellent chill corn descent, but in the winter, it seems to usually just be a field of sastrugi and rime.

We followed the existing bootpack up the summit pyramid, climbing just right of center. The topout was pretty simple with crampons and an ice ax.

It was a perfectly clear day. We could make out features in the Olympics, the Sound, and the Costal Range. Behind us, the North Cascades were just a blanket of white.

We booted back down about 30 ft into the central summit pyramid gully and put on our skis. The snow was pretty variables, with lots of hidden rime chunks, but the sun was softening the surface and at least made jump turns possible.

A key part of this trip was finding a way onto the Crystal Glacier so we could wrap around efficiently to the entrance of the NW Couloir. From the summit, it appeared that most of the connection between the Sulphide and Crystal was corniced, making an entrance challenging. We hugged left just below the summit pyramid and traversed onto a steep slope. Anthony pushed forward, hoping to not fall over a cornice. Blind rolls like this on skis are never fun. A few minutes later, he yelled to us that he made it across with no cornice and so we followed.

It was an easy skin up to the Hanging Glacier, so we were ready to begin our descent towards the NW Couloir. The top bit of the Hanging was low angle and wonderful powder. The views off to Baker and Canada made each turn absolute joyl.

There is a steeper roll on the Hanging Glacier before a nice flat spot just above the NW Couloir. As the pitch steepened to 40 degrees, we went from hero powder to blue ice briefly. We were definitely skiing a bit too loosely here. Take it easy through here!

At the flat spot just above the entrance to the couloir, we watched two snowboards booting back up. We chatted with them. They had skied the NW Couloir a few times before, but did not like the looks of the traverse currently. It had some icy spots and was slightly uphill in a spot. Ice and uphill traverses are a lot more challenging on a board than skis. So they understandably were bailing to the White Salmon. But it was definitely helpful beta for us.

We made a plan for Anthony and I to descend the upper couloir to investigate the traverse and then communicate with Sam and Will via radios. The upper couloir was actually very chill, maybe 45 degrees and quite wide. There is a nice flat spot beneath the cliffs before the traverse to regroup.

To us, the traverse did not look too bad. The snow looked edge-able. Anthony went first and scraped on some white ice briefly at one point, but otherwise got through it pretty quickly. I cautiously followed. Honestly, I was pretty nervous, but I just kept my ax in hand and moved quickly across the icy spot and it was not that bad. At the end of the traverse, I took a few deep breaths and then radioed to Sam and Will. They decided to just head out the White Salmon and would meet us at the base.

Anthony, who has skied Manaslu and many other steep lines, stepped out onto the steeps and made a few jump turns on the face. The powder was a bit more variable and wind effected than the Hanging or White Salmon, but still very good condition for a big line like this.

As I edged out onto the face, I gazed down at the snowfields 3000 ft below. This line has a “big mountain feel” like no other I have skied. The scale of the terrain is incredible. It is relentless and sustained at 40-45 degrees. So I took a few cautious jump turns. So far, so good. Now to repeat hundreds of more times. Mistakes are not allowed here.

The “couloir” is actually pretty wide for most of the way, which is nice. But you can never let your guard down because cliffs await below. No single move is difficult, but the physical and mental endurance required to ski something like this is substantial. But isn’t that how most mountain sport are – the big challenge is really just the amalgamation of hundreds of little challenges. Success is consistent and meticulous execution.

We kept far right through the lower constriction and then finally were home free on the apron. I raced down to the flats to join Anthony, face flushed and thighs burning. I was relieved and elated. We had done it.

For a while, Anthony and I just laid in the sun, letting our heart rates drop and legs recover. We watched Will and Sam send up powder clouds on the White Salmon Glacier. Then we rejoined at the base of the valley and began the always long skin back out to the car.

This was a five star day with a five star team. Shuksan is an incredible mountain and the winter access is unparalleled. The NW Couloir was just about as puckering as I expected, but I am happy with how we handled it as a team and individuals. After a long winter with bad stability, it felt great to be back in the big mountains. That being said, I definitely filled my steep skiing quota for a while.