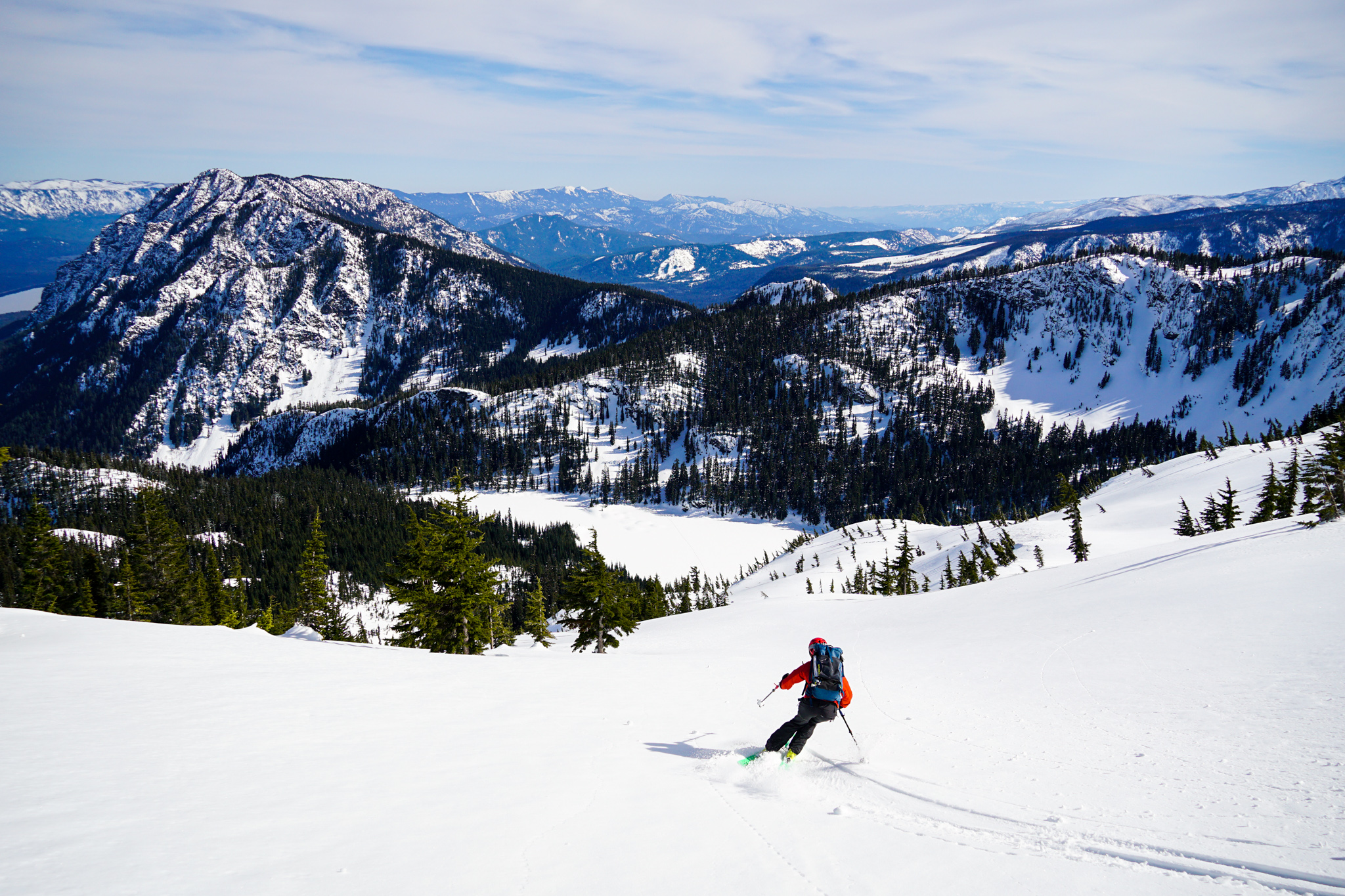 Rock, Howard, and Mastiff are three high peaks just east of Stevens Pass. They stand rather aloof, much like an island in the center of the Central Cascades. There is a classic ski tour linking the three peaks together with a short car shuttle. After a stormy February, some warm and sunny March days had me and Kyle 1.0 (KJ) itching to do something high and scenic, so we decided to finally go for the Rock Howard Mastiff Traverse.

We dropped a car at the Mastiff end and drove back to Rock. We started up at sunrise, skinning hard frozen snow along the ridge. The ridge is steep and south facing with generally poor coverage. Ski crampons were an absolute must, but even then, things were often dicey. KJ was smart and booted a few sections, but I refused to take the skis off and suffered accordingly.

After a winter of lapping easy pow at Crystal and setting the finest low angle skin tracks, this steep icy ridge skinning was a brutal reminder that spring skiing isn’t all glory and hero corn. After a few thousand feet, the ridge finally began to let up and we entered the alpine.

To either sides of the ridge, there are massive avalanche paths that recently ran full path on the persistent weak layer and decimated trees all the way down to the highway. It was quite impressive.

Travel became much easier in the alpine, skinning firm snow up to the shoulder of Rock. The terrain was surprisingly big and alpine here and the views were already great.

I could already tell I was going to like this traverse, regardless of the skiing. The position is really unique. These peaks are close to so many great areas – the Dakobed Range, the Entiat, the Chiwaukum, the Alpine Lakes Crest – but distinct. It gave a fresh perspective on so many areas I have seen before. We could see from Baker to Rainier, Wenatchee to the Olympics.

There are a few different descent options for Rock. We chose to go down the obvious couloir to the north. It was a bit icy up top, but then softened out to nice, silky preserved powder.

We took the run a good thousand feet down the north slopes through fun gully features. There is so much terrain back here!

We started a long skin up towards the notch between Howard and Rock. On the backside here, the air was perfectly calm and no tracks were visible. It felt so peaceful and lonely, just perfect.

At the next saddle, we ripped skins and skied a more solar run down to Crescent Lake. It felt like the snow changed on every turn – old pow, windboard, proto-corn, we got it all.

In the windless lake bowl, with snow reflecting the sun from three sides, it felt like a sauna. I changed out of my leg thermals before we began the south facing climb up Howard.

This climb is a long one, grinding up towards the high point in the traverse. It felt like one of those long spring climbs, where you shift down a gear and simply crank along. Each time you poke your head up, more distant peaks are revealed.

The run off Mt. Howard was rather wind effected, but we made the best of windblown sastrugi and even found some proto-corn closer to Lake Canan.

The climb up Mastiff was mostly a long, easy rightward traverse. We enjoyed the aesthetics of the small trees, hammered by winds, and gnarled pines. Soon, we arrived at our final summit of the day.

Even though Mastiff is the lowest of the three summits, I actually enjoyed its views the most. It has a strategic position, with clear line of sight down to Lake Wenatchee and up the Little Wenatchee, White, and Napeequa River Valleys. It felt like seeing the Cascades in a new way. Somehow, after all these years, there are still new things to see, or at least new ways to see old things.

Unlike the other two summits, this one was windless and warm. We lounged and KJ did his stretches. We identified as many peaks as possible and debated possible ski lines. We watched a group of five, the only other group doing the traverse this fine day, ski off the summit of Howard. Why hurry when there is nowhere better to go? The only way is down.

As we dropped of the backside of Mastiff, we were overjoyed to find preserved pow. With sweeping views of Lake Wenatchee and Central Cascades, soft afternoon light, and swooping turns through little trees and gullies, this was by far the best run of the day. Pure magic.

Down at Lost Lake, we said goodbye to the alpine and began the final climb of the day. Even though we were nearing 8k ft of gain and we had lost the sweeping alpine views, I could not have been happier. There was something about the way the light shone in the pine trees, shadows on the snow, and not a damn rustle of the wind. After a heart pumping descent of the NW Couloir of Shuksan just two days ago, this was exactly what I needed. Some adventures burn blue and hot. Others, like this one, simply smolder.

At the next ridge, we cruised down to Merrit Lake and began the traverse back to US2, side stepping some but mostly gliding and holding elevation. We crossed the ridge at 4600 ft and began the last south facing descent back to the highway. The snow was complete schmoo by this point in the day, necessitating jump turns just to not be stuck in the muck. The alder and trees never got too thick, but we were grateful for a healthy March snowpack, or it could have been bad. The stinger though was the largely uphill snow covered road to get back to US2! Ouch!

Back at the car, we lounged in base layers in the warm afternoon sun, listening to cars whizz by us. It felt like spring, but really this was just a primer for bigger spring traverses. This was really a super solid day. The Rock Howard Mastiff traverse might lack the wild ruggedness of the Nooksack Traverse, or the huge eye popping stats of the Isolation Traverse, but sometimes that is not what you are looking for. It does provide with great views, easy access, and good skiing. True spring skiing is still a long ways away, but it was nice to pretend, just for a day, that spring had sprung.