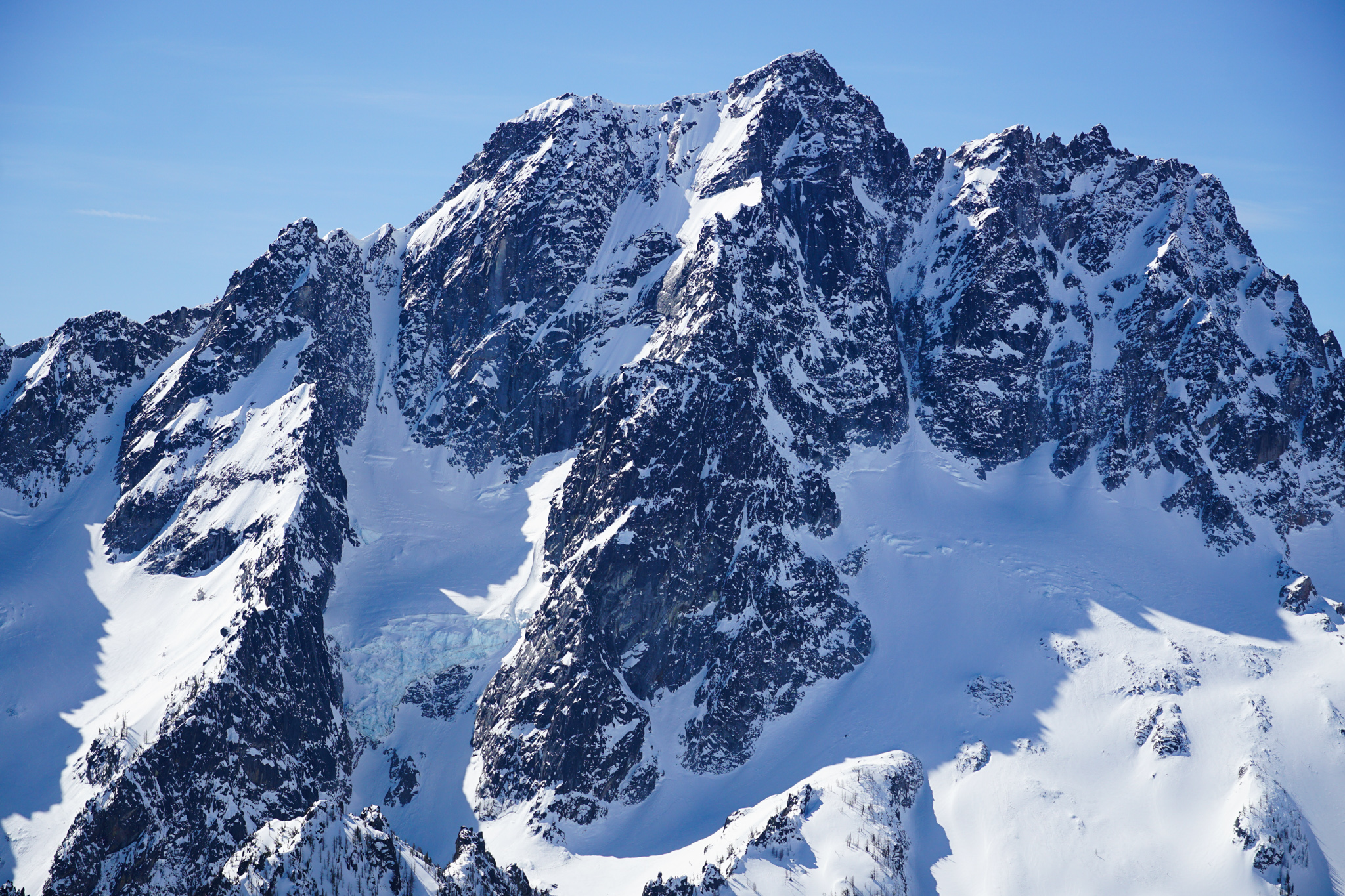 The Axis of the Stuart Range

Of all the subranges of the Cascades, the Stuart Range might be the most unique. The towering granite spires and high alpine lakes resemble the High Sierra and feel vastly different than the lush green meadows and old growth forests of the North Cascades. For me, the Stuart Range was eye-opening, one of the first places I explored beyond the usual I90 corridor and Mountain Loop hikes. But after so many days, the endless boulder fields, larches, and crowds felt tiresome. The range really felt just felt stale to me. I had ice climbed, rock climbing, peak bagged, and hiked through most of it. Over the last few years, I have hardly visited the Stuart Range. But recently, skiing in the range has renewed my interest.

Axis Peak is a mid elevation peak in the center of the Stuart Range. It has no particularly redeeming qualities and is not a top 100 peak, so it is largely overlooked. But its strategic position and long northerly slopes attracted my eye. Sam, Will, and I made plans to ski out to Axis.

Spring is coming fast in the Icicle. But the snowpack is hanging in strong and after a few short carries, we were skinning continuous snow on the Eightmile Road as we watched the warm morning light flood the canyon.

At the Eightmile Lake trailhead, we branched off the road and started towards Eightmile Lake. The snow coverage was just enough to keep skins on initially and became a few feet deep higher up the valley. The valley goes through a major burn and is completely open to the morning sun from the east. We looked up towards our right and saw evidence of many giant glide avalanches that had ripped through trees, covering the meadows in large piles of avy debris.

Near Eightmile Lake, we caught up with Anthony and his fiancee, Liz. They were out for a snowshoe/ski.

Despite its relatively modest elevation, Axis Peak looms over the valley like any other Stuart Range giant. The granite and snow on its NE Face were glowing in the morning sun. Our spirits soared as we soaked in the sun and scenery.

As we skinned across the sunny lake, I felt a renewed appreciation for the Stuart Range. It is a special part of the Cascades, despite the exponential summer crowds and frustrating permits. Snow covered, it felt so different and fresh.

We followed a leftover skintrack up into the North Bowl of Axis. Doug had been here the day before and reported great powder, but unfortunately we found only windboard. It must have been windy overnight!

As we crested the 7200 ft col just west of Axis Peak, the entire Stuart Range opened up before us. We were giddy with excitement as we finished the last short walk to the true summit.

Asthe sun beat down on this windless day, we lounged in base layers and bare feet as we admired what is possibly the best vantage point of the Stuart Range. It felt a lot like Ruby Mountain – high and isolated, surrounded and strategic, like an island in a mountain paradise. From Dragontail to Stuart to Eightmile to Cashmere, the horseshoe shaped range curved nearly completely around us. Here we were, standing upon the Axis of the Stuart Range.

The north side of Mt. Stuart is one of the most impressive places in the Cascades. I still believe the the Ice Cliff Glacier cirque, with its hanging ice cliffs, piercing walls of snow and rock, might be the most powerful spot in the Cascades.

Under its snowy veil, the Stuart Range felt entirely different. We gazed off in every direction, pointing out lines we wanted to ski, plausible traverses between peaks. It sure takes a bit of effort to get out here in the winter, but it definitely is worth it.

It was so pleasant that we could have laid there all day, but eventually we decided to head down. Since we knew the snow was not great on the north side, we decided to try to ski the south face. We poked around, eventually finding an open chute heading straight down towards Stuart Lake. The snow was softening nicely – not quite corn, still a bit mungy, perhaps “maize” as Will says. Adolescent corn. Whatever you want to call it, it was damn fun, at least with wide skis.

It was a wonderful 2400 ft run of burned glades and chutes all the way down to Stuart Lake. There was something special about dropping into an unknown line in such a scenic spot, without a track in sight. It felt just a little like an adventure.

We had a long debate of what to do next. We felt inspired to venture out to beneath the north face of Stuart, ski one of the couloirs off Mountaineer’s Ridge, or maybe go back to the north side of Axis. Ultimately, we agreed to just take another lap on the long 2000 ft run we had just skied and exit out the Stuart Lake trail.

It was a scintillatingly hot climb back up the south side of Axis. I am not ready for the heat of spring ski traverses. The Stuart Lake exit was becoming more and more enticing for no other reason than it would put us in the shade. The Eightmile exit would have been a sauna, so I did not want to go back that way.

From the top of the ridge, we hit the money chute once again. With a little better knowledge of the topography, Sam nailed this awesome shot of me.

Down at the lake, we said goodbye to the marvelous alpine and prepared ourselves for the long exit. No exit is easy in the Stuart Range – all are up and down with relatively poor coverage and tight trees. There is a reason you cannot do dawn patrols here. It is always a full day’s effort.

The initial forest down to the meadow was heinously tight trees, but things got easier from there. We were pleasantly surprised by the coverage and stayed in downhill mode the entire way from the Colchuck Lake turnoff back to the road. Call me weird, but I actually enjoyed the death luge a little. Even the splitboarder did not complain much, but perhaps he was just too far behind for Sam and I to hear him.

It was already soft evening light as we cruised down the four miles of road back to our cars. To ski in the Stuart Range is nearly always a full day and we got back over 11 hours after starting, despite a “relatively” small amount of vert, 8000 ft. The mileage, 22 miles, however, was quite substantial.

While we did not ski some rad line or throw down crazy stats, I really enjoyed this day. It felt organic – making the audible to exit Stuart Lake, skiing whatever looked good, thrashing our way out. Moments may have bordered on Type 1.5 fun, but all I really remember are the sweeping panoramic views, the corn-esque turns, and feeling of seeing an old friend in a new way. Until next time, Stuart Range.