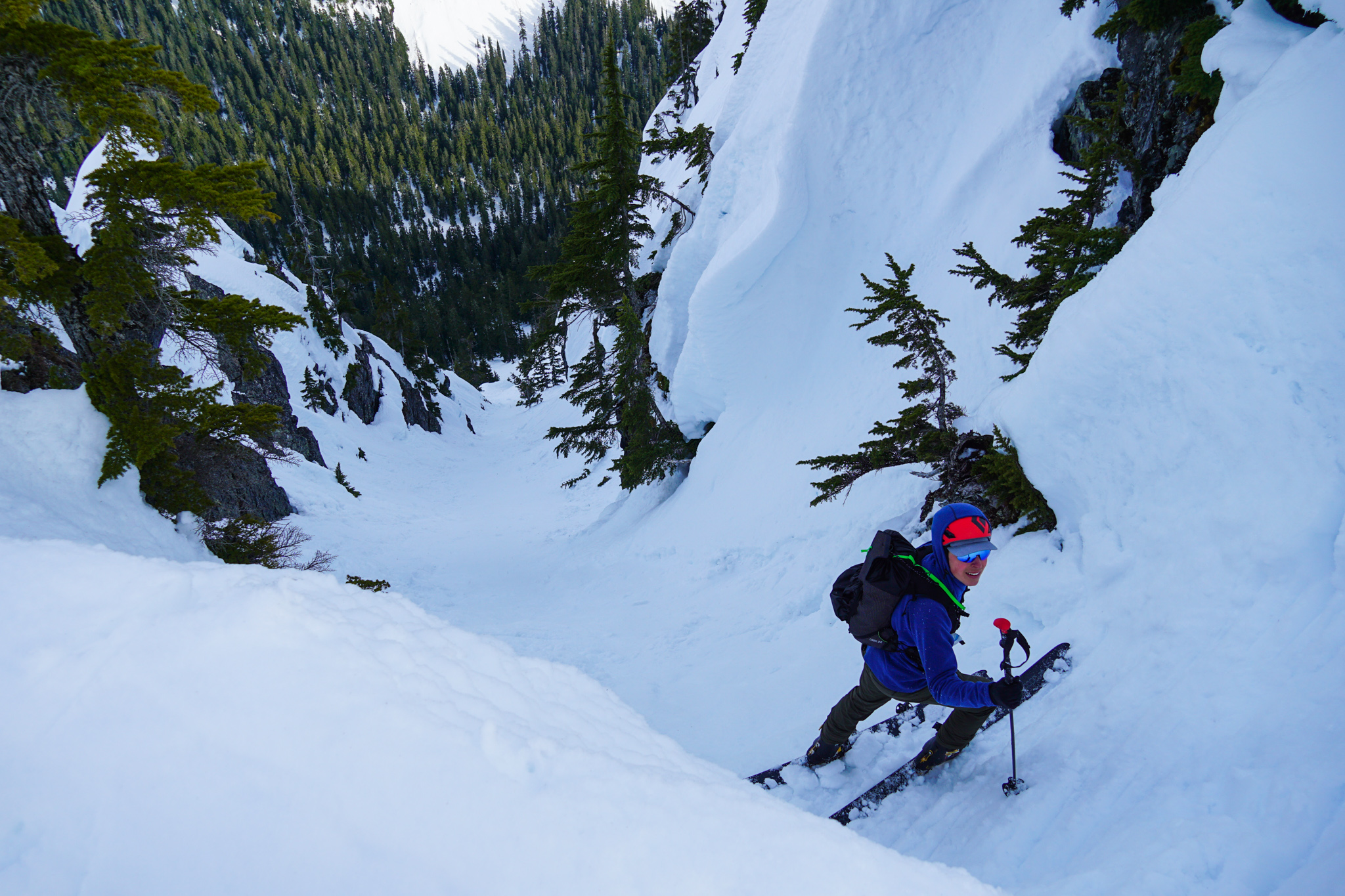 Guye Peak is an impressive but rather low elevation peak right above Snoqualmie Pass. Although many people pronounce it “guy” I like to see “Gee” like it is French, because after all, it is Snoqualminix! On the east side of Guye, hidden from the highway, there is a couloir that splits the steep mountain. Despite its proximity to the road, it is not skied that frequently compared to other classic Snoqualminix couloirs like the Slot. The short approach made it prime for an after work ski tour.

I met Sally and Sam at the pass in the afternoon. Sally is a friend from college who reconnected with me as she has been visiting from Spokane more frequently and wanted to tour on the westside. We skied together a few times back in Spokane, but we were both beginners then. We have both improved a lot since then!

There was a gentle breeze as we skinned up the Commonwealth to the standard creek crossing. We had to downclimb the 10 ft snow bank and ford the 4 inch deep creek to the other side. Unfortunately, Sally stepped in a deeper part and swamped her boot! Afterwards, we noticed there was a snow bridge just upstream.

On the west side of the creek, we continued, gradually climbing through nice forest to the Guye-Snoqualmie saddle. From here, it was an easy and scenic skin to the summit of Guye Peak.

It was fun to point out different peaks and lines to Sally since she was new to this area. I truly believe the Snoqualmie has the “biggest little mountains” in the country. The elevation may be low, but the terrain is steep, varied, and feels much bigger than the map would suggest. There are endless alpine objectives and even plentiful evening adventures like this one.

The east couloir is really a southeast facing couloir that descends off to the left just before the north (main) summit of Guye. The entrance is a little steep and narrow, but the bulk of it is plenty wide enough for jump turns and not too steep. It is definitely more technical than something like the Slot, but it is not too puckering or anything. Unfortunately, at 6 pm, the snow was already starting to refreeze in the couloir, despite the warm spring day.

It was Sally’s first real couloir, so she was understandably a little cautious. But she figured out the sideslipping and then even made some turns in the couloir. She handled it great!

The narrowest point was actually pretty low down in the couloir where a rock bifurcates the couloir. From there, we continued down some mushier forest snow and back down to the creek crossing. The best snow of the day was actually the corn snow in the Commonwealth Fun House on the way out!

The East Couloir of Guye Peak was a fun evening adventure, but nothing too crazy or significant. It may not have the allure or aesthetic of some other area classics, but the short approach definitely makes it worth a lap from time to time!