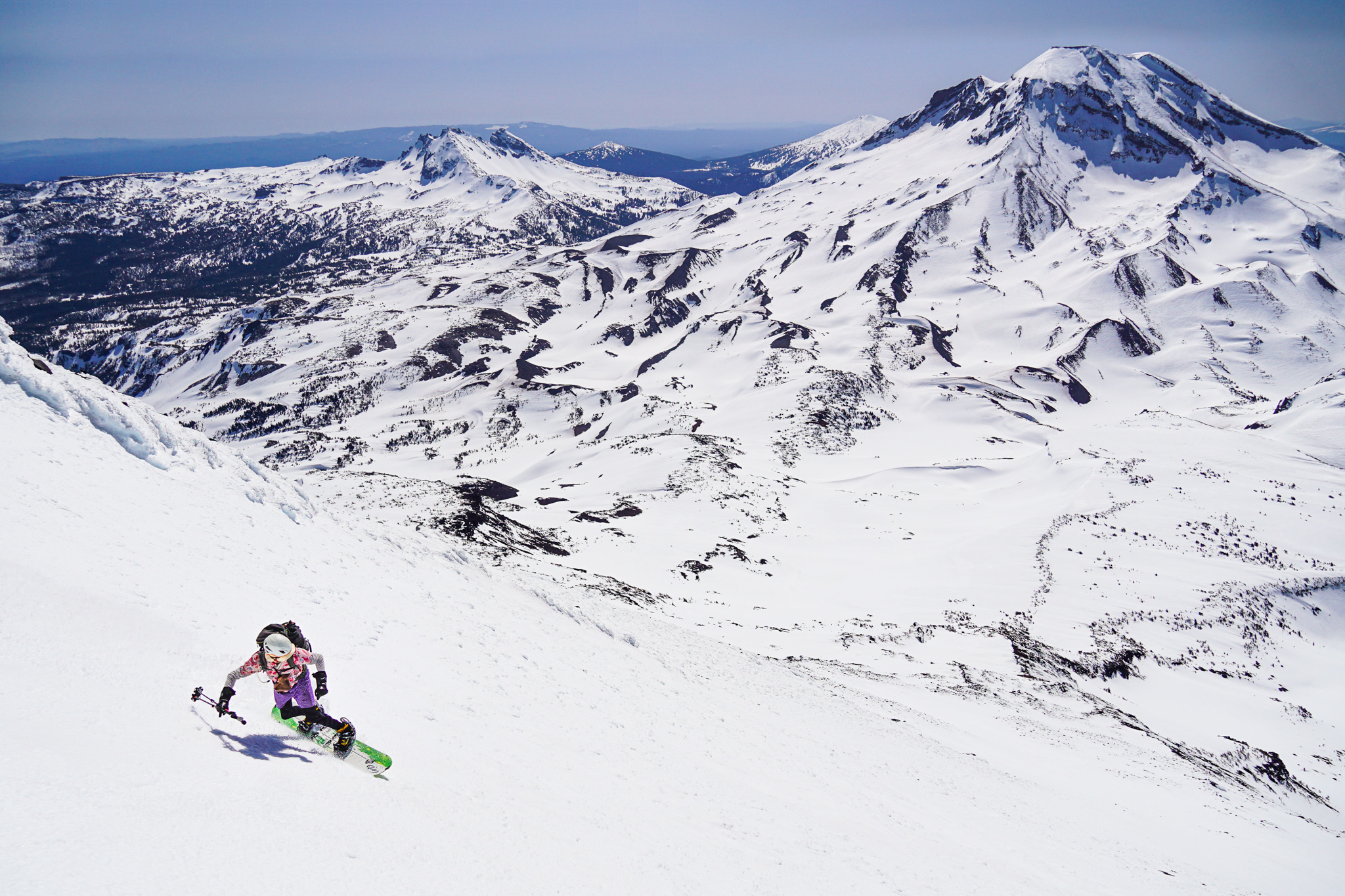 Hop, Skip, and a Jump

As I drove down into Eastern Oregon after climbing Mt. Hood with Jacob, I broke into sunny skies an a beautiful view of the Oregon Volcanoes. Jefferson looked stunning and the incredible Three Sisters dominated the skyline to the south, begging to be skied. When we arrived at the Airbnb in Redmond, I opened the curtain in my bedroom to reveal the Three Sisters above the housetops, beckoning in the evening light. So two days later, Austin, Tyler (a friend of Cherlyn, and local Bend crusher) and I headed up to do the classic Three Sisters Traverse.

Austin drove us up toward the Pole Creek Trailhead, stopping about a mile short of the trailhead. In hindsight, we definitely could have gotten all the way to the trailhead with his truck, but we did not want to risk it and did not mind a little road skinning to start the day. So Austin said goodbye to me and Tyler, planning to meet us on South Sister at the other end. And we were off!

The trailhead was dry but luckily, consistent snow coverage for skinning began just 10 ft up the trail! Tyler and I cruised up towards North Sister on firm snow through nicely spaced burned trees. It felt so fast and easy!

We continued traversing south before finally climbing up the drainage between Middle and North. The sun was already scalding.

We reached the base of North Sister three hours into our day. We lightened our packs and booted directly up the south face, topping out on the ridge around 9600 ft. The actual summit requires some psuedo ice climbing and mixed scrambling, so we were happy to turn around here.

From the ridge, we had our first full view of the traverse. While Middle Sister was close, and South Sister did not look that far away, Bachelor, where the car was, looked incredibly far away! It was a hop, skip, and a (massive) jump!

We dropped in and pleasantly found softening snow on the most eastern tilt of the south slopes. This run was short and over in a hurry.

Back at our gear stash, we loaded up full packs once again and climbed to the saddle between North and Middle. Strapping on crampons, we enjoyed a fast and firm booter up the north ridge. The great thing about this traverse is that it climbs northern aspects and descends southern aspects, making for fast ascents and soft descents!

Skiing off the SW side of Middle was pretty rimey for the first thousand feet, but nowhere near as bad as Hood! Below, the snow started to soften, feeling pretty corny.

For the first time in a while, I was able to truly let loose and feel the wind zipping by my ears. As we continued downwards, we entered the beautiful, complex terrain between Middle and South. A dozen moraine lakes lie sprinkled through this maze of glacial mounds. For the first time all trip, I had no cell service; it finally felt like wilderness, like we were really out there.

We began the long, grueling climb up the NW Ridge of South Sister. I actually felt stronger to start this climb than on Middle Sister, but fatigue wore in through 2000 ft of booting.

Finally, we crested the summit crater of South Sister. Across the crater was a small dot – Austin! We all joined together on the highest bump of South Sister, the third tallest peak in Oregon, and tallest of the Three Sisters.

Previously, I had looked down upon the Oregon Cascades because the volcanoes are so much bigger than the surrounding non volcanic mountains. But really, that prominence is what makes them so special. It is a peculiar landscape to gaze out to rolling hills, desert valleys, and giant mounts of dirt, ash, and ice thrust upwards through Earth’s mantle. Pretty cool, Central Oregon.

After a lengthy summit celebration, we started down South Sister. The top bit was also sun softened rime. Austin is a completely new skier this year, but handled it quite well! In case you are wondering how to start skiing as a complete beginner like Austin, I wrote an article about getting into backcountry skiing a ways back…

Although the snow was variable and Austin is not a strong skier yet, the novelty is still so strong. He was just so stoked to be skiing off of one of Oregon’s highest peaks – something that would have been unimaginable to him a year ago. His personal journey with skiing as been amazing to watch and I am so happy to have converted another trail runner. Skimo is the gateway drug!

We opted to take the direct southerly descent, staying west of Devil’s Hill. Although this would make for more road skinning, we felt it would be simpler and allow us to stay in downhill mode all the way to the road, although a one mile long flat plateau in the middle definitely tested our patience.

We were grateful to find running water as we reached the road. We fueled up and then prepared ourselves for the grueling 6 mile uphill skin back to Dutchman Flats. If anything was the crux of the day, it was this road skin. Gotta pay the troll toll!

We slowly spaced out while meandering up the road. Fortunately, cell service was great, so I caught up with Instagram and played some tunes on my phone. With two miles left, Tyler and I waited for Austin to catch up. He came storming by and shouted, “F-ck this sh-t, we’re getting stronger!” Tyler and I broke out laughing. These are exactly the vibes that make Austin a great addition to any trip.

Minutes turned into hours and finally, we saw the plowed road and knew the end was near.

As I looked back, the sky glowed a certain yellow-orange hue that only snow covered mountains can glow. From sunup to sundown, this was an amazing day with an amazing crew, sampling Oregon’s Finest, the Three Sisters Traverse.