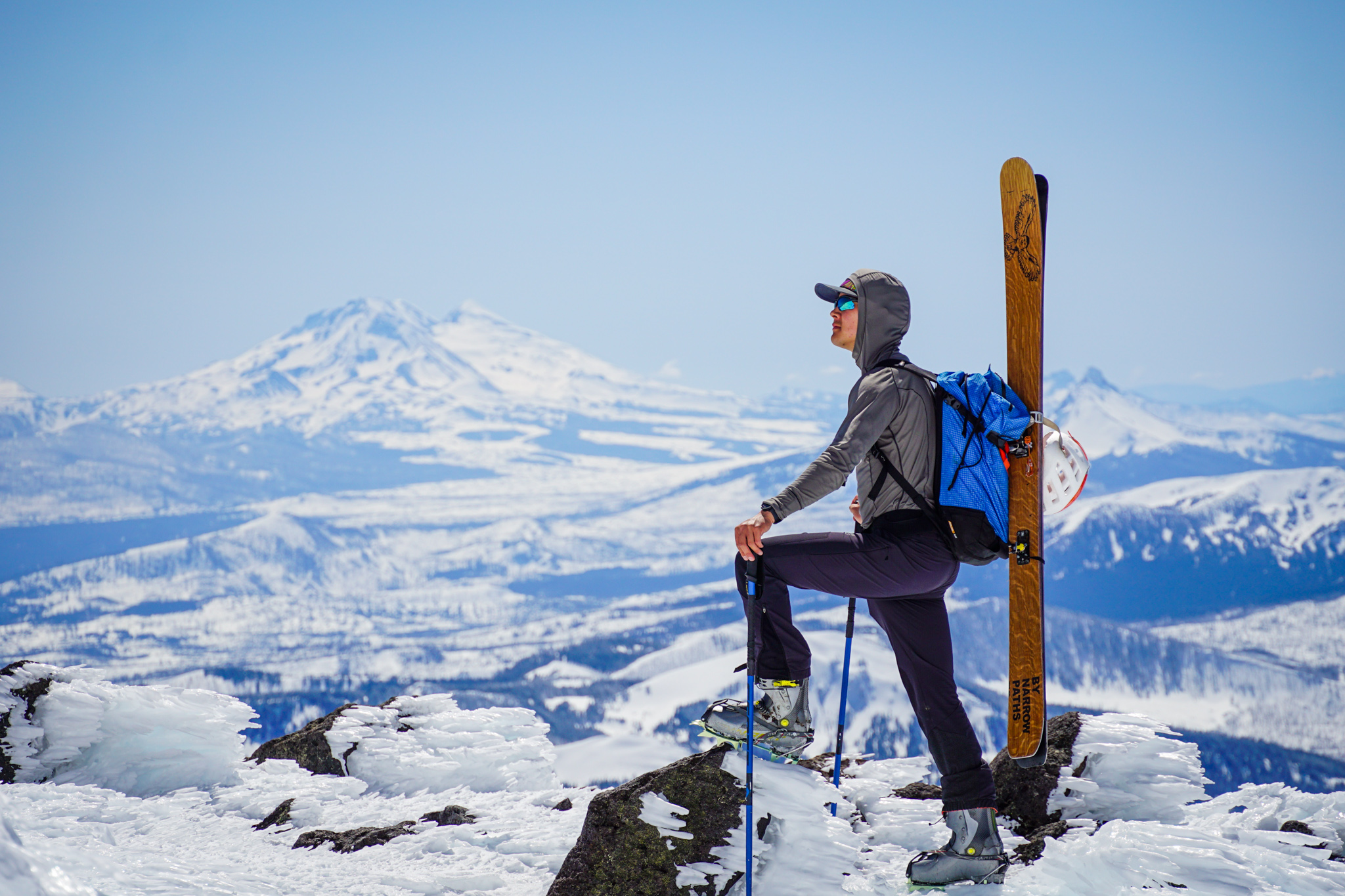 Spring is in the Air

At the end of my week working remotely near Smith Rock, I made plans to check out Jefferson with Jacob. Last weekend, we climbed Hood together and during the week I did the Three Sisters Traverse with Tyler and Austin. Jefferson could be a fifth volcano in a week and great way to close out the trip.

I did not really know anything about Jefferson, but noticed that the access on the west side from Pamelia Lake looked pretty simple. So Jacob and I met on the Pamelia Lake Road and drove up the road before stopping due to snow about one mile from the trailhead. So we slapped on our skins and we were off.

Upon reaching the actual trailhead, we had to stow the skis on our packs and hike for a little. It was my first time hiking through a lush green forest this season and it was such a big contrast to the desert scenery around Smith Rock.

Soon, we were able to put skis back on and cruised down the trail to Pamelia Lake. It was a yet another bluebird day, cool in the shade, blazing in the light. As we relaxed in the warmth of the sun, we gazed up at the mammoth volcano above us and listened to the sound of geese flocking to the melting lake. Spring is in the air!

Looking up, there was a huge open path blazed through the trees, nearly all the way down to the lake. It looked like a ski run! Jacob informed me that, indeed, it was a new run that was cleared for the Pamelia Ski Area, a locals-only quiet independent ski area. They had already closed for the season and taken down the rope tows, so it was open for any uphill traffic. Lucky us!

The ski run offered a quick option to get into the alpine instead of unnecessarily thrusting through trees with poor coverage. So we crossed the lake and started thrashing through the trees. Actually, it was not too bad, just a B1 on the bushwhacking scale. The ground was nearly snow free and the moss offered nice kick steps. There were basically no downed trees so we made quick upward progress. After about 500 ft, we crossed over to the ski run. The trickiest part here was climbing across a jumble of logs and tree trunks, possibly placed here by ski patrol to keep patrons from getting lost in the woods!

Finally on the slopes, we found firm snow with a dusting of fresh, making for hero booting conditions.

Higher up, there were many small tree-like sticks poking out of the snow. Jacob informed me these were gates used by the ski team for racing practice. How organic!

Once in the area, the vert started accumulating very quickly – one bag, two bags, three bags. Soon enough, we were booting up a steeper flank, exiting the ski area and entering the alpine flanks on the southwest side of Jefferson.

As we gained altitude, our pace slowed and we took frequent breaks to get glory shots and soak in the wonders of Central Oregon. On one side we had lush forests. On the other, sprawling desert. Neat!

The true summit of Jefferson is a non-trivial ice climb, so we called it quits around 10,000 ft. We took a long break here, just talking and chilling.

I asked Jacob if he ever anticipated, when we started climbing together four years ago, that he would be running ultras and skiing volcanoes. Back then he was just a sport climber. But we can never truly know the path we will take; we can only open our minds to possibilities, engage with others, and listen to ourselves. Who knows where we’ll end up.

Clicking in, we started down from our high point. The top was extremely rimey, not as bad as Hood, but still pretty challenging to ski.

Below 8500 ft, the snow got better. We scooted over to Pt. 7914, top of the SW Bowl. It also happens to be the highest point in the Pamelia Ski Area. During the season, they have a warming yurt up here.

We dropped into the massive bowl, eager for some good skiing finally. Unfortunately, the half inch of fresh snow created a randomly sticky surface. Just when I would get up speed, I’d feel something grab my skis and threaten to throw me off balance. Oh well, if I wanted to just ski good snow, I’d never leave Crystal.

The incredible position and length of the run more than made up for the subpar snow. I can see why Pamelia is such a gem! Aside: Vail is looking to buy Pamelia, which would ruin the local vibe and jack up prices. Write a note to Pamelia management urging them to keep Pamelia independent.

All good things must come to an end, and eventually we found ourselves hiking back down the forest to Pamelia Lake. From there, we did a combination of skinning, skiing, skooting, and walking back to our cars.

We felt that this was the perfect adventure day. Nothing was every scary or hard, but something felt special about exploring a less-climbed volcano, hiking through the woods, and trying new approaches. It was great to see Jacob on consecutive weekends after little contact in a few years. As I drove out towards Salem, I felt satisfied with my week in Oregon. My work here is done, but spring is just getting going.