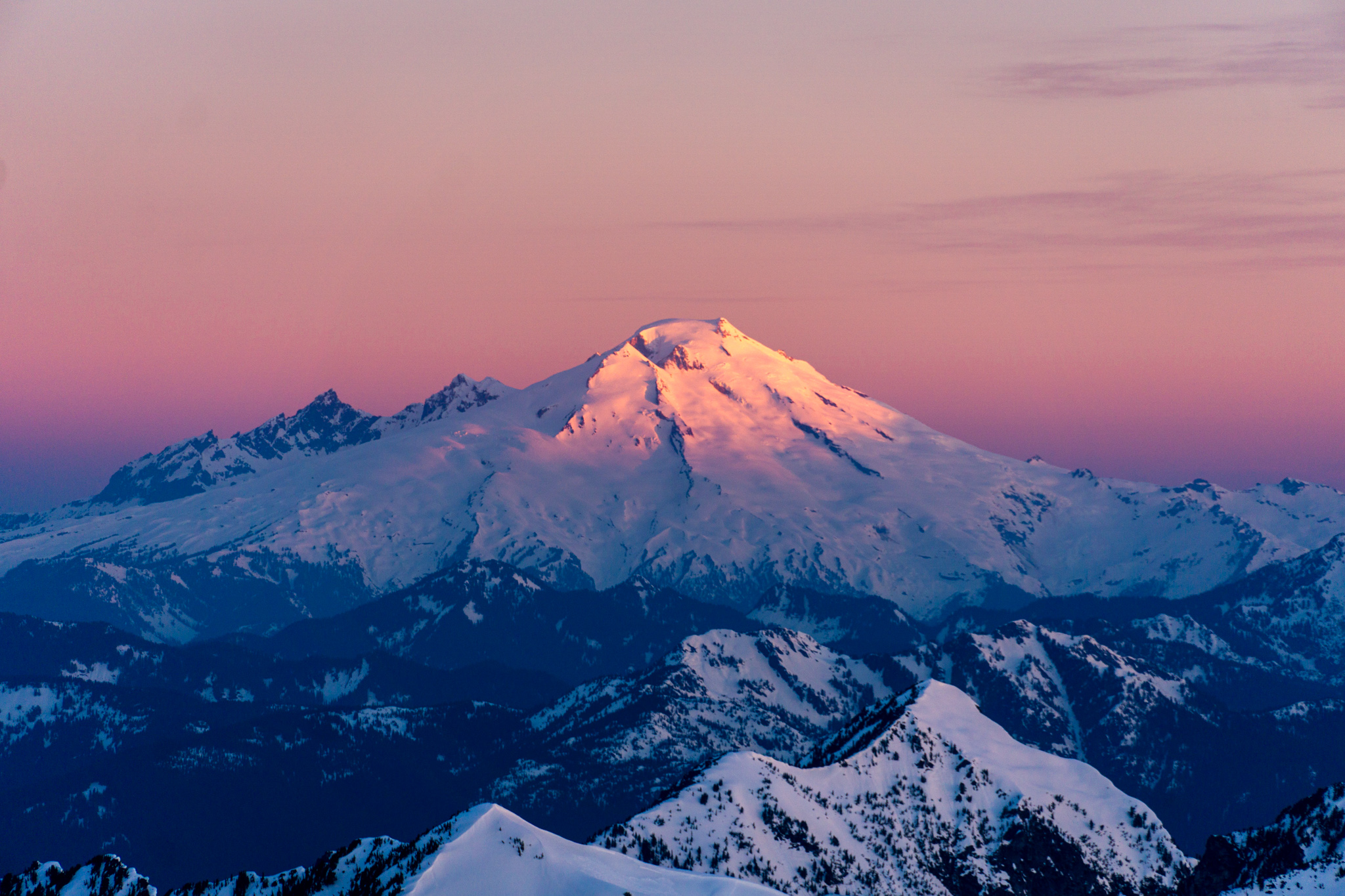 April has brought a strong warmup and summer like weather here in Seattle. While you might think the warm temperatures would harken a spring skiing haven, it is actually the opposite. It becomes so warm that the snowpack destabilizes and skiing resembles water skiing more than snow skiing. But with a beautiful sunny weekend, I still wanted to make the most of the nice weather. Luckily, Steve and I had planned all winter the perfect scenic ski tour: Snowking Mountain in the North Cascades.

Snowking is a giant 7,400+ ft mountain on the west side of Cascade River Road. It is rather low and forgotten compared to the giants just across the valley, but Steve and I had long admired it from many angles and felt like it would make a great spot for some alpenglow watching. Additionally, the route has minimal avalanche hazard and practically no overhead hazard, so it was perfect for a sketchy weekend like this. We added on Sally and Westy for a solid group of four.

We met in Marblemount Saturday morning and drove towards Snowking. The road is not really drivable after it crosses the Cascade River. We loaded up heavy packs with overnight gear, skis, and boots, my first heavy pack of the year. Then we began the hike up the old abandoned logging road.

The road is rather hilarious and is falling apart rapidly. The builders of the road decided to siwtchback multiple times across this one drainage, which has absolutely destroyed the road multiple times. It is overgrown with alder, sliding off the mountain in places. There is an old bridge that has collapsed nearly entirely, just hanging on in one corner. It was the first crux of the day.

There was minor snow on the road all the way to where the obvious climber’s trail (not the old Found Lake Trail) leaves the road and heads directly uphill. Soon enough, we were post holing, scrambling over downed trees, and crawling up logs suspended ten feet in the air. It was Sally’s first introduction to the North Cascades and the resulting ski shenanigans.

Above 3k, we found consistent enough coverage to start skinning. This made travel much quicker, although Sally struggled getting traction with the bumpy snow. Earlier she was mystified how we spotted the invisible logs beneath the snow that cause you to break through and consequently, she post holed much more than the rest of us. Whenever I go out with someone newer to the mountains, it always reminds me how so many things that seem simple – knowing where to walk on snow and not bust through, getting your skins to stick – are actually learned behaviors that only come from hours of suffering.

Above 4k, the forest is quite gentle and skinning through old growth cedars was quite pleasant. We were grateful to be spending most of the day in the shade, where the snow was surprisingly firm. Any open area was complete mush in the heat of the sun.

We stayed high over Found Ridge and then descended down the ridge towards Cyclone Lake. Sally has not yet mastered the art of down skinning and had to transition a few times. We probably all should have just done it, but Steve really enjoys down skinning, almost as much as he enjoys bushwhacking.

We stopped briefly to admire two skiers skiing off the summit. Between Found Ridge and Cyclone Lake we had encountered a complex network of meandering skin tracks. Later, we saw their giant yurt-like structure on top of one of the knobs near the lake. It looked like a castle! But we never did cross paths with the two skiers.

The traverse from Found Ridge to Cyclone Lake took a bit longer than expected with the mushy snow and we were all withering in the heat. But Steve resourcefully dug into the lake near the outlet and found us melted water a few feet down! With some fresh water, we felt ready for the final long climb of the day.

There is always such a stark transition between the subalpine and the alpine in the North Cascades. As we left Cyclone Lake, we left behind a cute zone of alpine tarns and groves of trees and ascended onto the Snowking Glacier. From Teebone Ridge to Eldorado to Formidable, the mighty Cascade River Rd Giants made their appearance. This zone is easily my favorite zone for spring ski mountaineering. Last spring I spent many days back here on the Pearl Necklace, Isolation, and Magic S. It always captivates me, especially on skis.

We were all getting pretty tired, but the promise of evening sun and an epic sunset lured us into pushing all the way to the summit ridge. We plopped out on the north ridge about 50 ft below the true summit of Snowking. With deep snow drifts, there would be plenty of space to dig out little sleeping platforms and build wind walls. What a campsite!

Steve lives for winter alpenglow and thus is an expert in building snow walls. He brought an expedition sized snow saw that allowed us to cut big blocks of snow and build some bomber walls pretty quickly. The west wind was only moderate, but taking the wind out made things feel quite pleasant.

With the hard work done, we melted snow and ate dinner as we waited for the sun to slowly set. After a winter of day trips, it was a great change of pace to just hang out in a beautiful place with some wonderful people. When nearly all the skiing is bad, what else is there to do?

A pleasure plane flew by beneath us, zooming up the Cascade River Valley and basically along the route of the Ptarmigan Traverse. I scrambled for my camera and somehow managed some decent shots.

And then there was nothing to do but wait for the North Cascades to put on their show. Fortunately for us, we had the best seats in the house.

There was this incredible moment when the sunlight reflected perfectly off the windows of the Hidden Lake Lookout. It lit up across the valley like a lighthouse. I not an expert on the physics, but it seems pretty unlikely that we would be in the perfect spot to catch that reflection. Sometimes everything just lines up, even without trying. It makes those moments every bit more magical.

As we suspected, Snowking has a most excellent position on the western side of the range. So many epic peaks to the north and east, with shimmering views of the Sound to the west.

I don’t know if I have ever camped so high in winter like conditions before. The alpenglow is even more stunning than during summer because the extra snow on faces mixes with the oranges and purples in a way that even photos cannot capture. I can understand why Steve lives for this. For Sally, it was a truly new experience to camp anywhere like this, and she was amazed. For me, it was definitely a top two sunset, the only other equal being my Goode summit with Steve last summer.

And as the sun dipped below the skyline, the Sound still glowed all the way to the San Juan Islands and distant Olympic Mountains.

The sky was still glowing yellow as we curled into our sleeping bags for the night. Each time I opened my eyes, I watched meteors race across the sky. The wind was noisy, but I felt cozy behind my wind wall. It was my first open bivy in snowy conditions and it was not too bad, but the warm temperatures definitely played a part.

Earlier than expected, it began to get light in the east and it was time to pull out the camera. Luckily, there was no wind wall on that side so I could sit up in my sleeping bag and take photos from there.

The light changes in unexpected ways so quickly, kissing the tops of unexpected peaks, taking different angles through the terrain.

We had a lazy morning, sleeping in and eating food, just waiting for the snow to soften a little. Westy and I made a short trip to bag the true summit of Snowking.

9 o’clock was corn o’clock, so we packed up and skied down the Snowking Glacier. The low angle, east facing slopes provided some legitimate quality skiing, but by the time we got close to Cyclone Lake, and it was already grabby mashed potatoes.

We did a few short skins and traverses and eventually ended up at the top of Found Peak. There were actually snowshoe tracks up here! It was a remarkable spot. We turned back to look at Snowking one last time before leaving the alpine.

The descent was a crash course in skiing breakable crust and mush with a heavy pack, but everyone handled it well. Below 4k, coverage started getting thin, but Steve expertly navigated through blowdowns, jumping over logs and yelling “skis are tools not jewels” which is the skimo equivalent of “you only live once (YOLO)!”

After switching back to booting, we managed to find a way back down to the climber’s trail that did not involve crawling over downed logs and it was rather smooth back to the road. Here, we took a long break tending to our feet, swatting far-too-early mosquitoes, and working on our tans. Then it was just the slog back down the brushy road to our cars.

Even though we barely managed 1000 ft of good skiing over the entire weekend, there is honestly nothing else I would have rather done. I have had a long, fruitful ski season so far and am willing to trade some turns for a five star sunset and quality time with friends. Mixing up the style of my trips – from a fast paced ski traverse to a lazy summit camp – is how I stay stoked and fresh. It helps to have friends who bring diverse interests and passions to the mountains. Thank you Steve, Westy, and Sally for such a fun weekend!