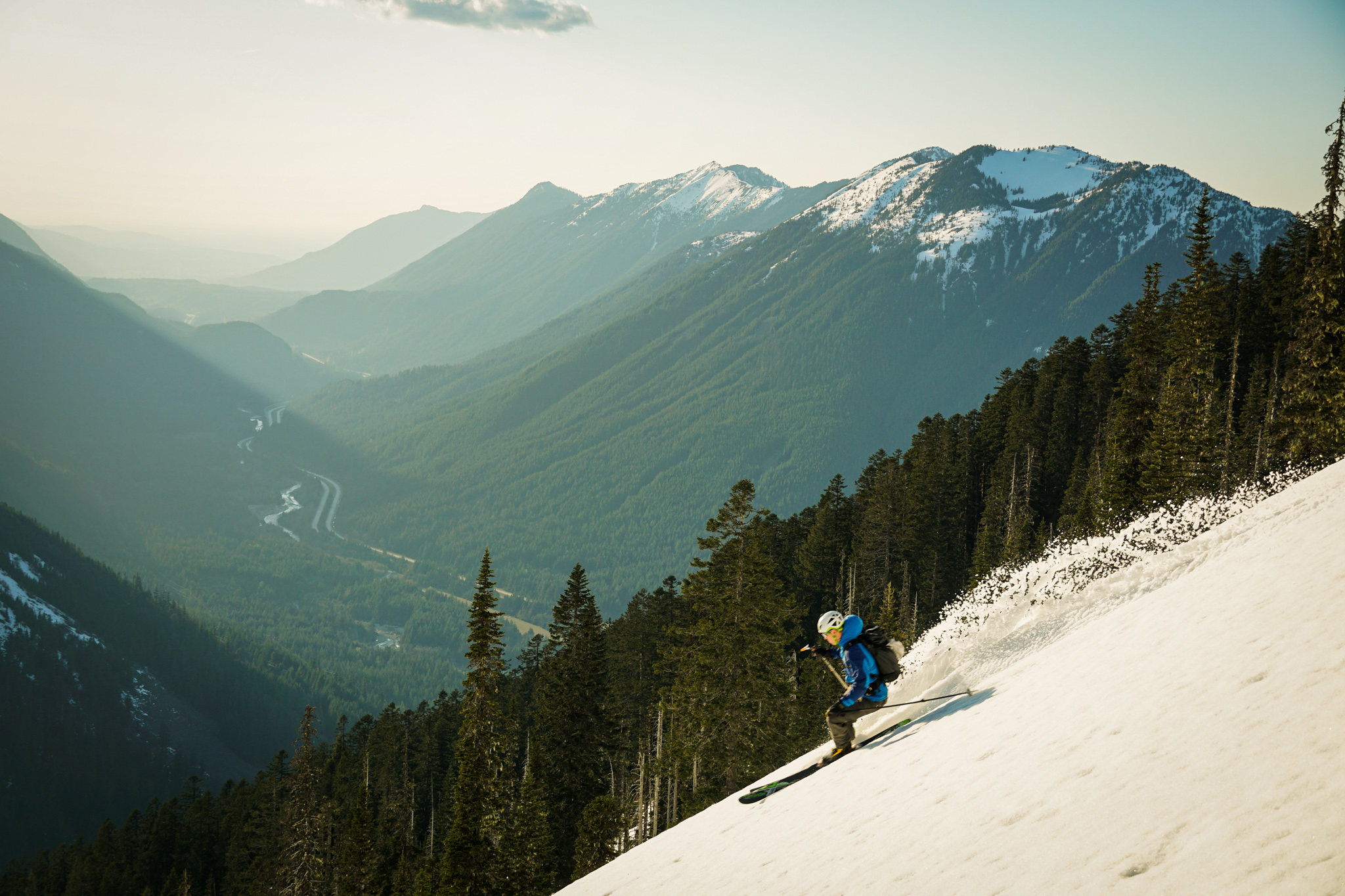 Driving from North Bend towards Snoqualmie Pass on I90, there is an obvious long open glade directly in view. Like everyone else, I noticed it dozens of times before I really noticed it. Finally, I remembered to pull out a map and identify the run. It was the West Face of Humpback Mountain: a 2000 ft 30-35 degree open run! I was hooked. It became my top local objective. I had to ski it. The only challenge was when.

The approach to Humpback begins from Exit 47, where you parallel the highway on Tinkham Rd actually going downhill for a few miles, before reascending FS 5510 to the base of the run at about 3000 ft. I really did not want to deal with extra road skinning on Tinkham Rd, so I had to wait until it was snow free. But I also knew that such a low elevation west facing line would melt out quickly. The window for easy access but good coverage would be narrow.

Doug and I had been discussing this line practically all spring, analyzing historical satellite imagery to estimate the melt out times. He reconned the road several times before finding it drive-able. It felt hilarious to be putting so much research into such a trivial line. Ultimately, Doug jumped the gun while I was busy and “poached” the line, so I called up Kyle SW, a North Bend local with an eye for random evening adventures, and made plans to get the line before the record April heatwave got it for good.

We drove up after work and were able to get to about 2500 ft on FS 5510. Some skinning and then road walking above the switchback brought us to continuous road snow and the base of the slide path at 2700 ft. Coverage looked uninspiring here so we continued one more switchback to 3000 ft. There was just enough snow to navigate the alder without taking our skis off. It “went”, but just barely! I wouldn’t recommend it any later…

We linked snow patches through the alder for about 500 ft before emerging into wide open glades and shots. As we continued upwards, we were blown away by the seemingly infinite terrain. There were huge open paths, sparse old growth strands, straight tree shots. It just kept going and going. There is truly nothing comparable in the Snoqualmie environs.

The snow was a bit over ripened from a week of 70 degree temps, so trail breaking was hard and slow. Finally, we hit the ridge and then continued north to the true summit of Humpback Mountain.

The highway was background noise, much like a the trickle of a mountain stream or crackle of a campfire. I love being deep in the wilderness, away from signs of people, but there is also something magical about gazing down on civilization, so close yet so distant. One moment we are down there, the next we are up here. It really emphasizes how lucky we are to live in such a beautiful place. Snoqualminix provides.

The snow was a little slow and sloppy, but the firmness beneath made for predictable, fun skiing. We zipped down to the top of the alder field.

There are so many different lines to choose here, and they are all about equally fantastic.

We donned skins again and returned back to the ridgeline. It was much easier this time with a skin track in. This would be an incredible place to farm corn – or maybe even powder.

As the sun began to dip behind McClellan’s Butte, we ripped down the west face of Humpback one last time. In the cool evening air, the snow had solidified just enough to provide some of the best turns I have gotten all spring.

Part of what I love about mountains is having a vision and executing that vision to perfection. When I first truly saw Humpback, I knew I wanted to ski that line in soft snow into the setting sun. While this might not be the hardest vision to achieve, it still feels rewarding to turn a vision into a reality. Having a vision is what transforms an objective into an experience, something holistic and deeply personal.

We managed to thrash our way back to the road with some dry alder skinning and a bit of creativity. From there, it was all downhill to the cars.

Even with all the hype we had created around Humpback, it still somehow exceeded my expectations. I think it is now my favorite run at the pass, and it is not even at the pass. These “micro-adventures” are a perfect compliment to the “macro-adventures” of spring ski mountaineering. In a weird way, they are almost more satisfying. Because these are things I know I will be able to do even when my body is old, my time is not free, and life pulls me in different directions. As long as we can think creatively, there is always satisfaction and enjoyment to be had in the hills.