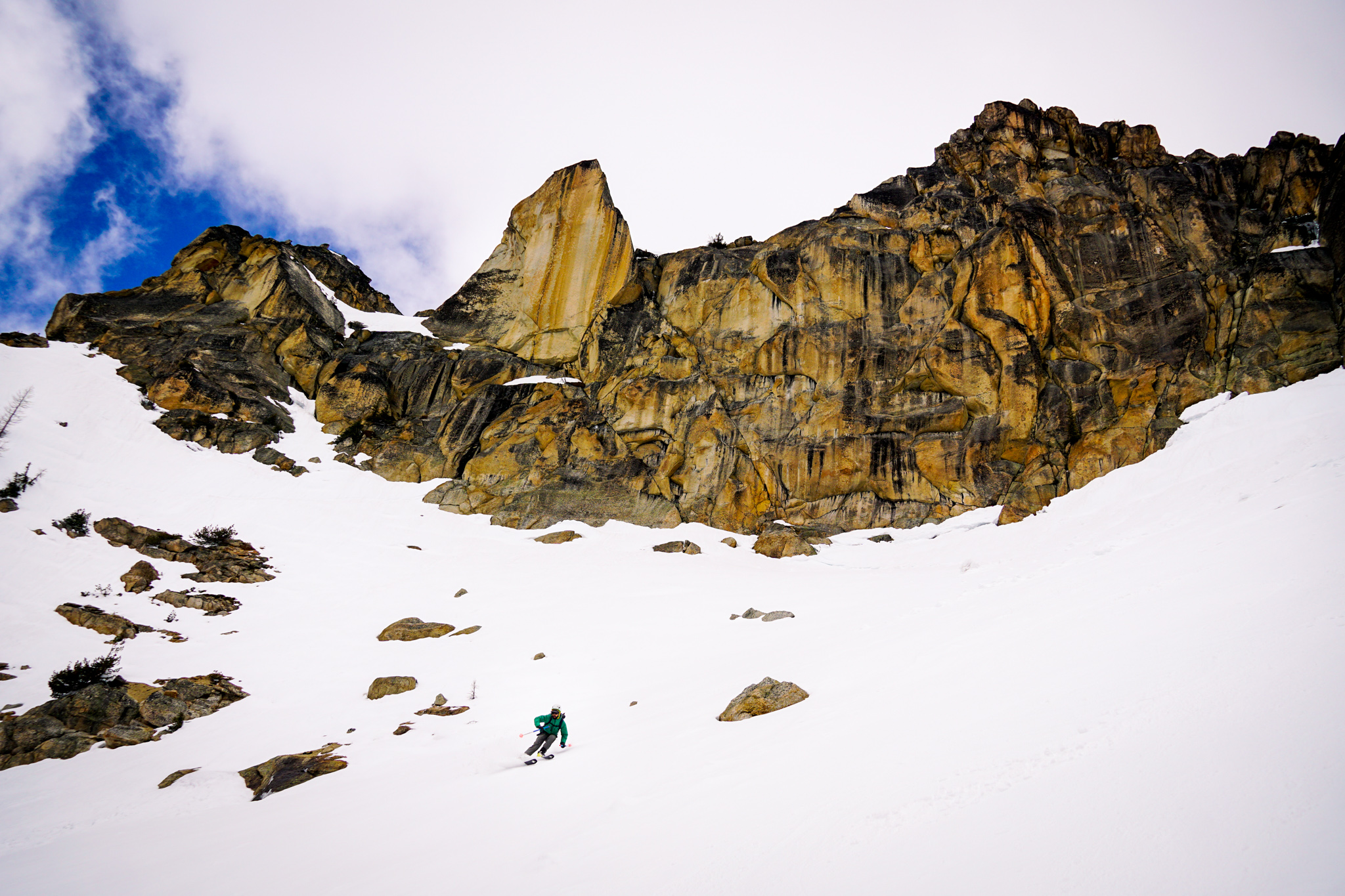 Sneaking through the Backdoor

Each spring, when Highway 20 opens, skiers flock to Washington Pass for some of the best skiing around. The terrain is steep, varied, and seemingly endless. Most skiers are going to do the classic Birthday Tour, but that tour only scratches the surface. One of my favorite things to do is draw up exploratory ski tours in the area, reading through old trip reports and looking at maps and satellite imagery. Last year, I came up with the Silver Kangaroo Traverse. This year, once again, I honed in on the Big Kangaroo region and drew up the “Backdoor Bangaroo”: a ski tour that circumnavigated Big Kangaroo and Wallaby Peaks and leveraged a hypothetical couloir south of Wallaby (the “Backdoor”) to link the entire tour together.

Nick, Jon, Allie, and I met at the hairpin on Saturday morning. The forecast called for partly sunny skies, but it would end up staying mostly cloudy and cool all day. The only real sunshine we got was right in the morning.

We began the day just like the Silver Kangaroo Traverse: a 2800 ft climb up to the 8000 ft notch in Kangaroo Ridge just north of Big Kangaroo. In the forest, we passed Cherlyn’s group, which was doing a similar tour.

With crampons and firm snow, the climb went pretty quickly. There was a weird rock slide in the upper couloir, which required some annoying choss walking.

On the other side of the col, we found about 4 inches of windboarded powder from the day before. We thought it might ski pretty well, but it was not very good in skinny lightweight skis.

Here, we diverged from the Silver Kangaroo. We turned right and started traversing southward beneath Big Kangaroo. The snow was a mixture of grabby dust on crust and straight up crust. I took one big wipeout when an edge caught.

There are some impressive hunks of rock in this area! It made Jon very excited to see in person. These walls are not visible from any road, but are sheer vertical and hundreds of feet tall.

At the end of the traverse, we started booting up a north facing couloir to a notch just east of Half Moon. I believe this feature is called “The Beer Bong”. There were some cornices above the couloir, but we found a break on the side that allowed a little cornice mantle.

We walked out onto a nice snowy knoll for a lunch break, with great views to the Gardeners, Cedar Creek, and many peaks of the Twisp River area that I am rather unfamiliar with.

Even after so many years in the Cascades, there are still certain spots that surprise me. This little corner has giant orange rock walls, steep snow couloirs, and wide glacial valleys.

We skied a small section below Half Moon before arcing a hard traverse to reach a snowy saddle that would get us close to Kangaroo Temple. As we descended beneath Half Moon, we realized that our lunch spot had actually been atop a massive, overhung rock face! I do not know even know the name of this feature, but it was completely wild.

As we finished the slightly uphill traverse to reach the snowy col, Cherlyn’s group appeared below us. They were climbing to a col on Wallaby Peak and exiting out that way. She nabbed a photo of some good old fashioned pole whacking.

The next descent led us through the snow slabs between more giant walls of the Kangaroo Temple Region. With a brief moment of sun, the snow corned up and we got our first good turns of the entire day.

The name “Kangaroo Temple” felt apt. We skied a snowy hallway between giant rock faces, reminiscent of some geologic temple. Of all parts of this tour, this run felt the most regal and wild.

Near the base of “The Fin”, we started another climb to a notch that would lead us to the headwaters of North Creek.

Then we performed another downward traverse until we were just below a notch in the ridge, just north of the northwest peak of Gilbert Mountain. This was the key connector through an otherwise indomitable craggy ridge. Luckily, we could see a break in the cornice and passage through.

As we crested the col, we were greeted by a cold wind and blowing snow. Corn was not in our future. But we were delighted by the view into the snowy northern Chelan Sawtooth Wilderness, where I had done the Triple Rainbow High Route a few autumns back. It felt so far from the crowds of Washington Pass and the familiar Liberty Bell Spires. The “Backdoor Couloir”, as we called it, rolled out before us like a white carpet, giving passage to the valley floor of the Twisp River. I had first spotted the Backdoor during a larch march last fall around Stiletto Peak. Here we were, 8 months later, on the other side of the looking glass.

With the cold temps and wind, the snow was very firm. To make matters worse, the middle section was filled with frozen avy debris. 1/10 skiing, 10/10 ambiance. Position over condition, eh?

The couloir was rather moderate for its entirety: 30-35 degrees, moderate width. It doglegs right and takes you 1800 ft to the valley floor. It is the kind of line that is more chill than thrill. Once at the apron, we finally found softened snow and good corn.

Down at the valley floor, it felt more like spring. We filled up on running water from the Twisp River and slapped on skins for the first time all day, beginning a gentle 1000 ft climb to Kangaroo Pass.

At Kangaroo Pass, we followed the masses of tracks from the Birthday Tour back down to the hairpin. The snow skied more like an inbounds run and made for some of the better turns all day.

Despite the poor skiing conditions, we had a great day. When snow conditions are suspect, it makes sense to prioritize exploration and adventure over steep lines and corn harvests. On the Backdoor Bangaroo, we saw some absolutely stunning terrain and great ski lines for when the snow is softer. There were many question marks we had going in – cliffs, cornices, cols – and all of them resolved themselves remarkably easily. Big thank you to Allie, Jon, and Nick for going along with another one of my weird ideas for an adventure!