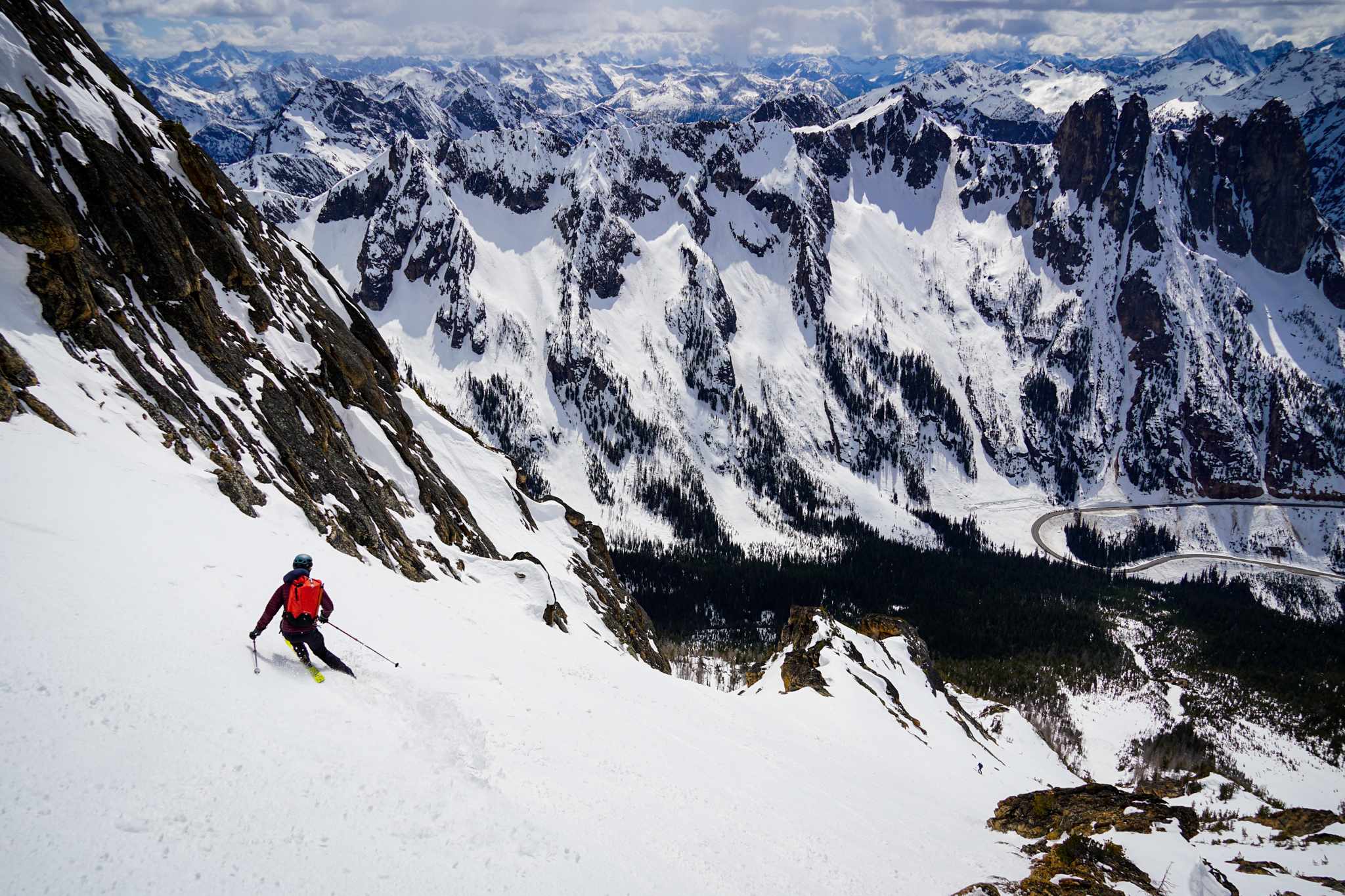 After an exploratory day doing the Backdoor Bangaroo, Nick and I now had the beta we needed in terms of lines and snow conditions. We made a tour plan to go the opposite direction through Wallaby and Big Kangaroo, skiing the south face of Wallaby, Life is Good, The Beer Bong, and finally climbing up the north couloir of Big Kangaroo and skiing down to the hairpin. It would be a fun linkup of steep skiing. Logan and other Kyle (KJ) came up to the pass to join us.

The day started off much sunnier than the previous day. The Hairpin valley was shimmering in all its glory as we skinned up to Kangaroo Pass.

Once at the pass, we booted up the southwest ridge of Wallaby Peak. The climb was simple in the firm morning snow.

After the moody clouds of the day before, it was nice to be in bright sunshine with the familiar distant giants of the Northeastern Cascades.

We spent a good hour lying on the summit, waiting for the snow on the south face to soften. Our plan was to ski a thin couloir that we had spotted the day before. Strangely, clouds started to float in from the east, slowing the warming process. In the shade, it was still quite cool.

Eventually we got antsy and decided to get skiing. The top bit was firm but the gut of the little couloir skied very well. The choke was rather narrow, maybe 10 ft wide, and melting quickly. I suspect this line will be out in another week.

At the valley bottom, we skinned back up to Kangaroo Pass and repeated our climb up to Wallaby Peak. This time, we edged over to a col on the right shoulder of Wallaby Peak. This col was the top of “Life is Good”, a steep little line we had scouted the day before.

This line had looked improbably steep from afar the day before, but from above, it did not look too bad. The entrance around a cornice was pretty steep, but after that, it was sufficiently wide to make comfortable turns. Logan went first, and showed us how it is done.

To get into “The Beer Bong”, we chipped away at the cornice where we had climbed up the day before. It was so helpful to have an intimate knowledge with the terrain from the day before. Had we not done that tour, we would have been blindly searching for a break in the cornice from above, which is always a scary prospect. Yesterday’s recon had proven invaluable.

The Bong is perfectly north facing so it was very firm and icy. We zoomed over towards Big Kangaroo and started skinning beneath the familiar big wall.

Our plan was to climb the north couloir of Big Kangaroo and potentially lap it before skiing down to the hairpin. So we skinned as high as we could and then started booting up the couloir. Like most lines, it was nowhere as steep or long as it looked from afar.

As the couloir doglegs left, it becomes very deeply incut and shaded. Here, we found 6 inches of settled chalk on top of a firm icy layer. We got excited for potential powder turns, but unfortunately the choke was a bit icier, so we scratched any ideas of skiing the line. The choke is decently wide, but probably 50 degrees and slightly double fall line with a giant rock wall overhanging on one side. It is a pretty wild feature, almost tunnel-like.

We popped out near the summit of Big Kangaroo and back into the familiar land of Highway 20. During our time on the eastside of the Kangaroo Massif, convective clouds had built all over the North Cascades. It appeared to be snowing in many pockets, but the sun broke through for us. It was so peaceful, so magical.

With the glorious sun shining, and 3k of ripe corn beneath us, the time to shred was now. This shallow gully off Big Kangaroo is the proud line visible from the hairpin. It is the line that just begs to be skied.

This was the run that kept giving. Buttery corn, continuous fall line, spectacular setting. There was some avy debris at one point, but we avoided it completely in the trees off to the right. At points, I wondered if people down at the hairpin could hear us screaming in ecstasy. It may have been the best corn run of my young ski career.

Even as we reached the small trees, the skiing was still good and easy. Soon we popped out at the hairpin, 3000 ft below the top of Big Kangaroo. What a way to end the day!

After a day like this, there is truly nothing else to say other than “Life is Good”. In what felt like a relatively moderate length tour, we covered such fantastic terrain with a quality group of shredders. Opening weekend at Washington Pass has been such a blast – fantastic skiing, low key adventure, abundant friends. The vibe is always just so positive – everyone is just stoked to be back in the land of orange rock, steep coolies, and tasty baguettes. Long live WA Pass opening weekend!