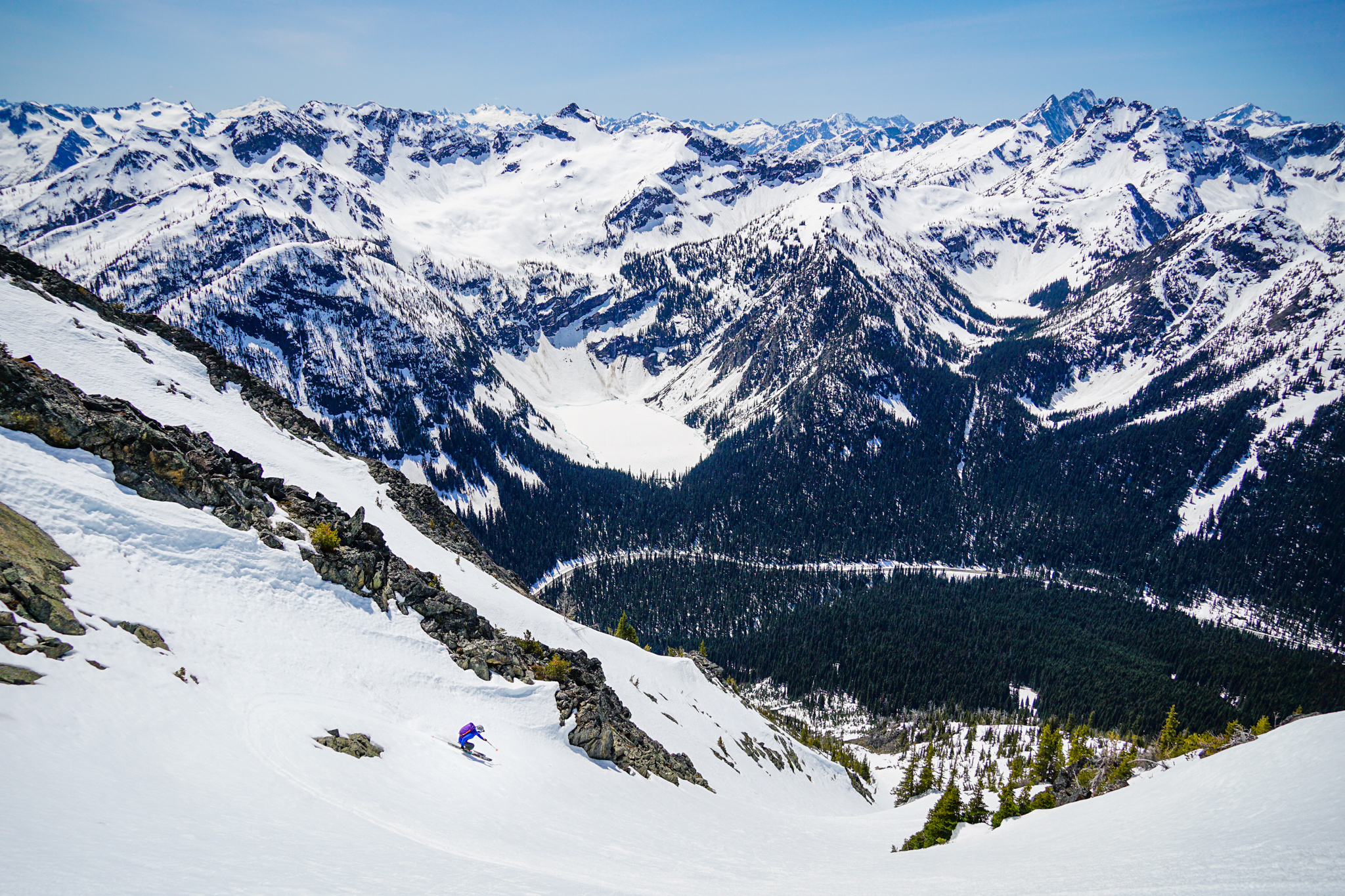 This spring, I have made skiing around Highway 20 at Rainy and Washington Pass a priority. Once the highway opens, we have access to some of the most fantastic ski terrain in the country. The hills are littered with giant peaks and steep couloirs, many of which rise straight above the highway. The epitome of this sentiment is Whistler Mountain, an incognito mountain that rises 3000 ft above Bridge Creek.

During my tour to Black Peak with Logan, we noticed the striking, wildly aesthetic west face of Whistler Mountain. A series of gullies offers nearly 3k of fall line skiing down to Bridge Creek in theory. From the Crooked Bum, it felt like it was begging to be skied.

Logan had to head back to Montana, but I found Sammy, another half-asian shredder, at the last minute to head out to Whistler with me for the weekend. Sammy is very humble about his ski abilities. I had to assure him that it was “chill and not steep” to get him to agree to come along, but I nailed the pitch apparently!

We skinned through easy forest for a little over one thousand feet before breaking out into the basin beneath Whistler and the SW Peak of Cutthroat Peak. Moderate skiing options abound!

Everything in this bowl is south or west facing, so we continued up to the col between SW Cutthroat and Whistler to try an east facing run into the next bowl.

We were able sneak into the east facing bowl beneath Cutthroat through some cornices. Even at 9:30 am, the snow was cooked and manky. As we skinned back out of the basin, we watched some house sized cornices break off, fortunately not above us. That was enough of a reminder to not put ourselves beneath cornices for the rest of the weekend.

Back at the saddle, we skinned up to the summit block of SW Cutthroat. I noticed that one could continue another 200 ft to the true summit on snow, although it was a little thin. Sammy opted to chill at the shoulder, so I continued to the top alone.

I had not skied anything north of the highway to this point. The highway wraps around both sides of Whistler and you get great views of all the ski terrain around the passes from this vantage.

Sammy says that Highway 20 is his favorite views and favorite place to ski. On a bluebird day like this, it is obvious why. The ski potential, just within one valley of the highway, is seemingly infinite. It is like our very own Roger’s Pass.

I did not want to keep Sammy waiting too long, so I clicked in and made some hop turns down from the top.

Past the steeper west facing section, we found marvelous corn on the southern aspects.

We had an excellent 1500 ft run and then took a lunch break before our climb up to Whistler.

We started booting up the shallow snow gully just on the northern side of the west ridge. I hoped it would still be shaded and firm, but the booting was unsupportable and exhausting. Post holing was unpredictable and became even worse on the ridge, with rocks melting out the snow beneath. But I knew that the slower I went, the worse the snow would become, so I trudged on. Zone 3, baby!

After a long hard booter, we reached the high shoulder of Whistler Mountain and gazed down at our line: the west gully! It looked wide, not too steep, and incredibly positioned. Not steep or scary, just like I had promised. And damn scenic.

We took a short break, but the corn was ripe at 1:45 pm and ready for harvesting. There were a few old tracks, but otherwise the chute was smooth all the way to the running waterfall we could see at the bottom.

I took a few buttery turns and reported favorably to Sammy. Primo conditions!

One of my favorite things with skiing is spotting a cool line, wondering what it would be like to shred, then making it happen. See the line, ski the line. Make your dreams come true, kid.

Sammy is very humble about his ski abilities, but the man knows how to make a turn for the camera. Arcing on the edge of the gully, I captured one of my best ski shots to date. The scenery, fall line, and proximity to the highway capture everything that makes this such a special place for spring skiing. Position and condition!

We cruised and hollered down over a thousand feet before exiting right into some glades, since the gully soon terminated in a running waterfall. We enjoyed more fall line skiing through the glades until the snow was so mushy that we just started traversing right so we could get back to Rainy Pass without putting skins back on.

This was a sick day with Sammy making a vision, albeit a small one, come true. The magnitude of possibilities off Highway 20 continues to blow my mind. I am stoked to keep exploring new lines and farming the fertile lands of the North Cascades!