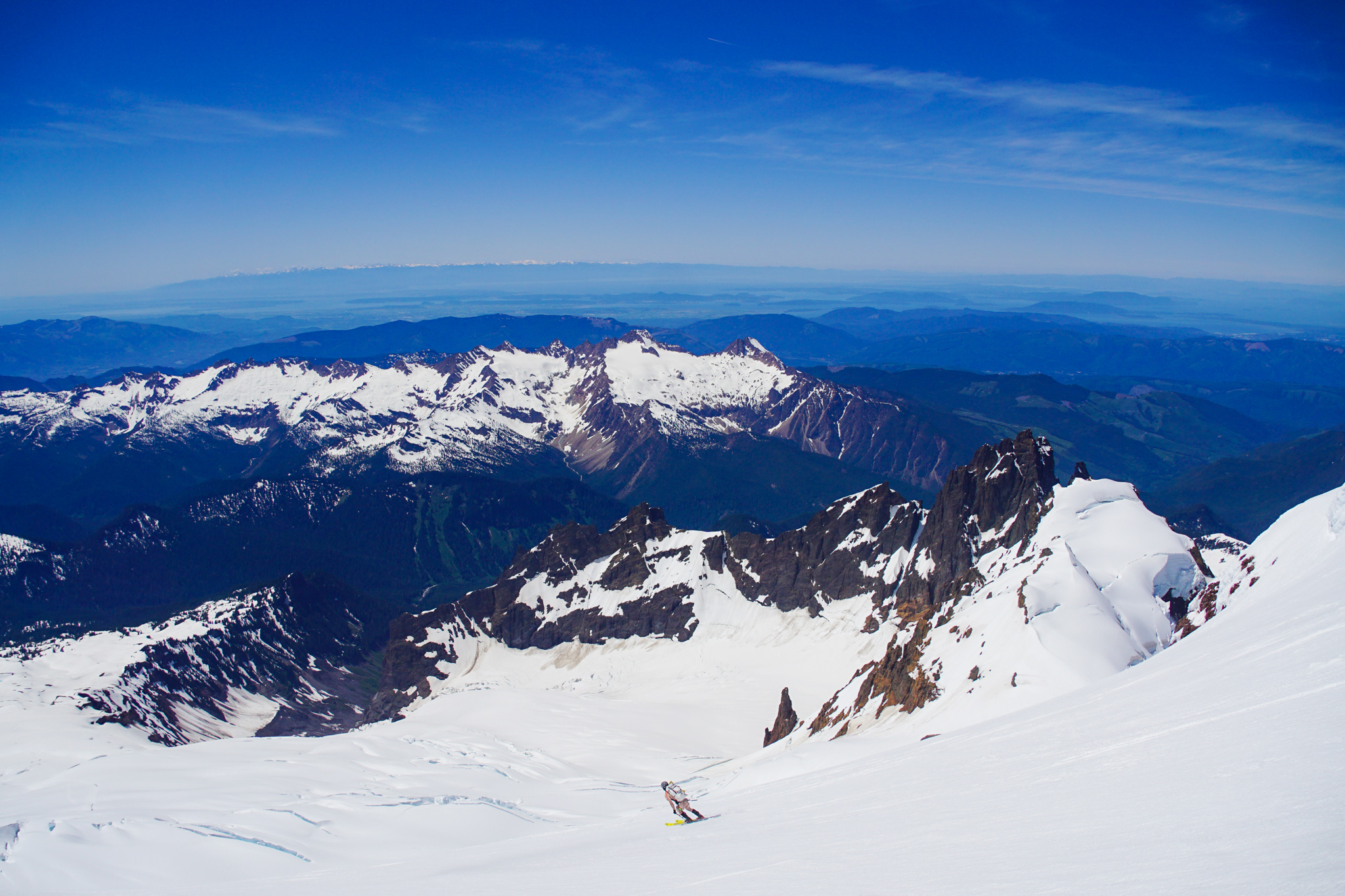 After the Easy to Cascade Pass Traverse, I have been mostly gearing up for summer, trying to get back into running and climbing shape. But with a sunny weekend forecast, I could not help but sneaking in one last ski day on the summer solstice. I had big climbing plans Saturday, so I figured a stroll up the Squak Glacier on Sunday would be simple enough. Fortunately, Sam set me up with his friends Chris and Arin.

I got a few hours of sleep and drove my sleepy self up the Schribers Meadows road, meeting Chris and Arin around 5 am. Incredibly, there was still snow covering the last bit of road, at 3300 ft on a southern aspect! So we skinned a few minutes to the trailhead and began up the Squak approach trail.

The snow was predictably patchy and we lost the trail here and there. We skinned some and hiked some but finally found a deep, consistent snowpack when we entered the basin at 4200 ft. The suncups were massive here in the forest, making for annoying skinning.

We continued up the ridge and broke out of the trees around 5,000 ft with already impressive views of the Twin Sisters Range, North Cascades, and North Central Cascades. I have been on Baker half a dozen times, but nearly every time on the north side. In my opinion, the view on this side is much better, with views of both the Sound and most of the Cascades.

Around 6,000 ft, we crossed onto the Squak Glacier. It is huge, low angle, and relatively filled in. After such a long, taxing day the day before, it was nice to be able to turn my brain off and just skin up long, low angle switchbacks at an easy pace.

A stiff east breeze kept us cool at the perfect temperature. When the breeze died occasionally, it was an oven. Maybe it sounds counterintuitive, but I am ready for ski season to be over because I am tired of being hot!

It was a remarkably clear day. The Olympics were out in clarity. We could see individual towns down along Puget Sound and in the San Juans. Even Adams, near the Oregon border, was out!

We booted the last pitch to the summit plateau because there was a mega booter in, but we could have skinned it if we really wanted.

We arrived at the summit right around noon. It seemed like most other parties, especially all the ones that had camped the night before, had already summited and it actually was not too busy up top. We did, however, run into my friends Jaysen, Lauren, and Derrick, who had just climbed the North Ridge!

On the way up, I had remarked that the warm temps would make for a pleasant BN down the Squak. Chris and Arin had never BN’d before, so they were quite intrigued. We figured it was a good a time as any!

We scooted over the summit plateau, made a transition, and got ready for our final run of the season. The top of the Easton was perfect corn, which is good, because falling is not an option in this atire!

The reaction of the bystanders was overwhelmingly positive! We got many surprise gasps and loud cheers. We party skied the upper Squak in great style, zooming, laughing, and spraying each other.

Near 8000 ft, the snow became very sticky in places. Coming in at a high speed, we all bucked forward and nearly went over the handlebars. It was simply too risky to continue like this, so we put our clothes back on. It would have been nice to get another few thousand feet of good skiing, but instead it was a thigh burning descent, just trying not to wipe out in the sticky snow.

We continued down the same way we camp up, through the forest, some hiking, and eventually back to our cars. The Squak Glacier was a very chill, relaxing way to close out my ski season. Thank you to Chris and Arin for letting me tag along on another fine day in the North Cascades!