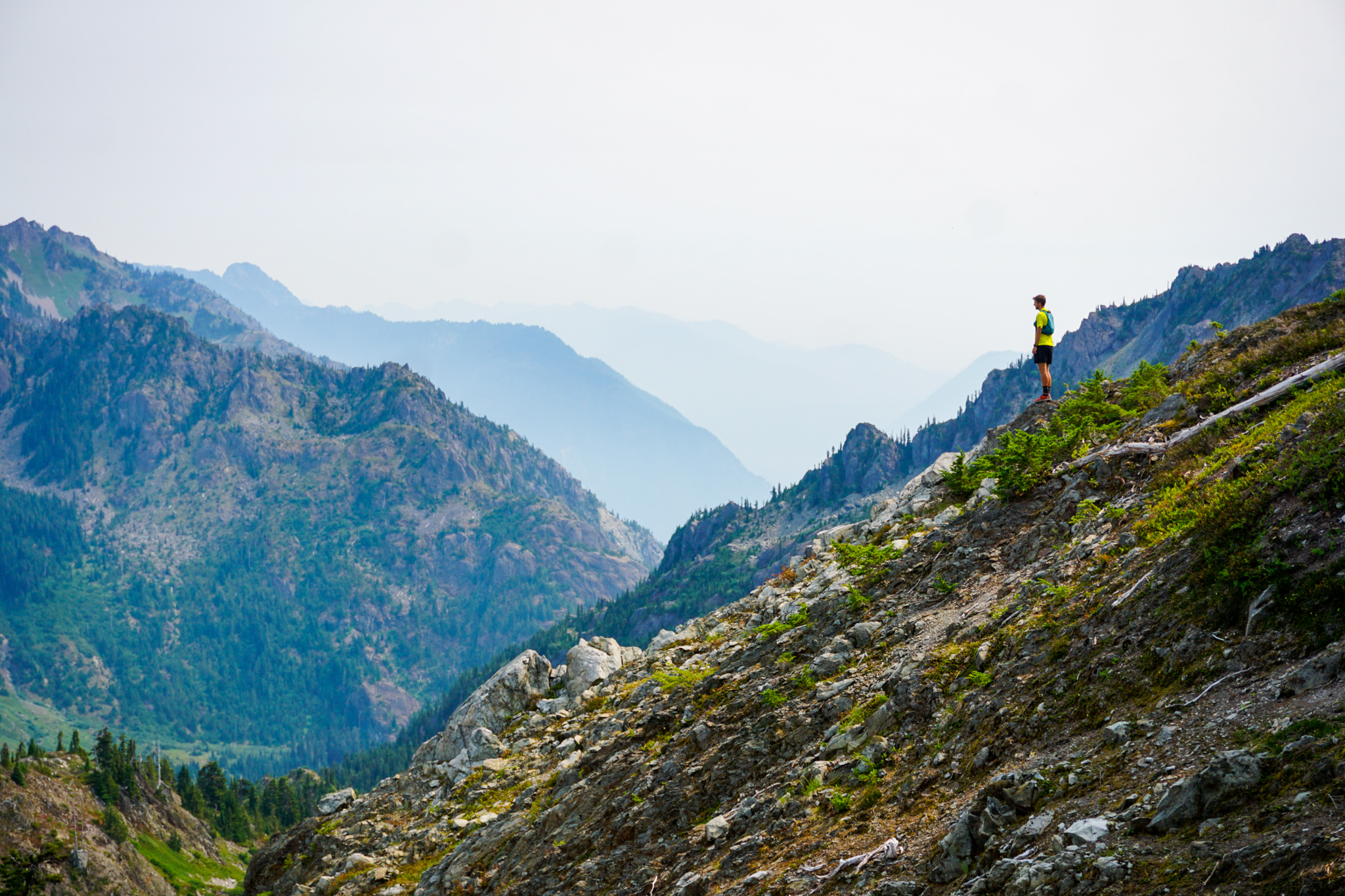 The southeast corner of the Olympics is one region of our local mountains I have spent nearly no time exploring. If I go to the Olympics, I usually go to the high rainshadowed peaks of the northeast corner or the Olympus area. But some bad smoke in the Puget Sound Lowlands and Cascades, flowing in from Canada, pushed us to the southern Olympics, where air quality would improve first.

Blake, Sam, Tyler, Joe, and I headed out one morning to Lake Cushman and Staircase Rapids. Blake just got back from New Zealand, where he fortuitously spent the last 18 months, dodging the Covid pandemic. I am excited to have him back and unleash his speed on the Cascades! (Stringbean) Joe is a legendary thru-hiker/runner who at one point held the PCT, AT, Long Trail, and Arizona Trail speed records! Joe actually had the same high school cross country coach as me and Blake – Coach Kelly! I met Joe a few weeks back and thought he would be a fun guy to go on mountain adventures with.

We began along the river trail for a few miles before turning off to the Flapjack Lakes Trail. The climb was gentle and we reached Flapjack Lakes about two hours in. The air was extremely still and moderately hazy, but we could tell air quality was already improving. There were not many mosquitoes, but definitely were biting flies.

We continued on upwards to Gladys Divide. We got a close up view of Sawtooth Ridge, an impressive ridge of gendarmes and peaks. Wayne Wallace once traversed the entire ridgeline! At the pass, we also met a solo hiker who was celebrating his 70th birthday. He was hiking Gladys Divide, 20 miles roundtrip, as a day hike!

There is an easy use trail that heads up to the summit of Mt. Gladys. The hazy skies foreshortened our world to just a few ridges and valleys away, but it was clear enough to easily see Olympus to the west.

We ambled down the post glacial terrain on the north side of Gladys towards a beautiful alpine tarn. It was obvious how dry it has been this summer, with the lack of flowers and dry vegetation, but it was still very green and beautiful.

Despite weak solar radiation, the day was hot and muggy, so we jumped in the tarn and swam out to the island. We decided we were “island bagging”. The water was the perfect temperature and so refreshing. This is what summer is all about!

We decided to meander over towards Henderson, following the ridgeline over, which was pretty easy. I spotted a humongous split boulder down in the valley, taller than the trees around it! Maybe someday I will have to check it out.

We reached the summit ridge of Henderson and it looked a bit bushy, so Blake, Sam and I chilled while Tyler and Joe went to bag the summit. With a warm breeze and afternoon sun, I quickly fell asleep in a blissful alpine nap.

Since this was a day of exploration, we next descended a steep grassy hillside towards a small pond. Despite claiming he has no “big mountain experience”, Joe was faster than us on just about all terrain, a testament to his incredible fitness and experience on long FKT (fastest known time) attempts.

We were very indecisive about how to return to Black and White Lakes. It probably would have been fastest to descend to Smith Lake and hit the trail there, but instead we did a weird combination of climbing and sidehilling that was probably the least efficient method possible. We even ended up passing right by the lake where we went swimming earlier.

We eventually found our way to the Black and White Lakes, where we finally saw people once again. The campers directed us to the wrong trail (thanks a lot, guys) and then we had to do even more bramble schwacking to get back to the real trail. But then we were finally cruising downhill and back in the shade.

We rejoined the Flapjack Lake Trail and then kept on rolling back down the river grade to the trailhead. The heat was really getting old, but Blake and Joe zoomed ahead while Sam, Tyler, and I just struggled to the finish. The final uphill to the car was savage. I felt way more worked than I should have for only 23 miles and 8k ft gain. We were all ready for another swim, this time in Lake Cushman!

This was a really chill, vibing day with the boys. Laughter was constant and I enjoyed swimming, napping, and not pursuing some specific objective for once. The terrain was enjoyable, if not the most spectacular. But the Olympics always provide a change of pace and beautiful scenery. We are so lucky to have them in our back pocket!