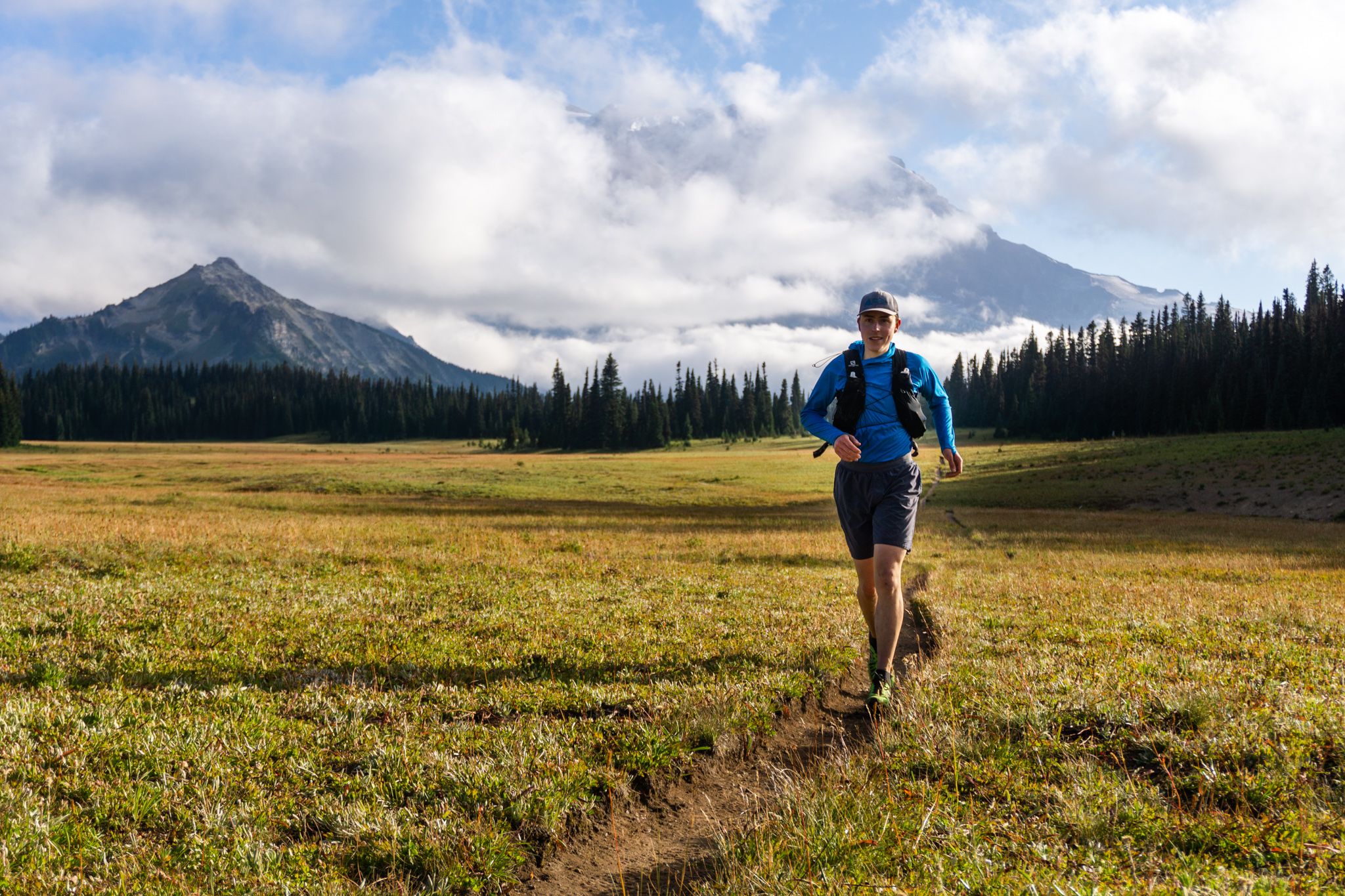 Prancing in the Park

Of all the areas in the Cascades, Mt. Rainier National Park has remained one of the least explored to me. I did summit Rainier once six years ago, but since had barely been back to the park. I am a North Cascades Fanboy and to be honest, the scenery while climbing a volcano just is not very inspiring to me. The mountains around feel like lame little hills and the rock is always bad. Volcanoes are really just big piles of choss and ice. But I knew there was more to Mt. Rainier National Park than the summit and made plans to get out there at least once this summer.

Always looking for high routes and loops, I drew up a route on the north side of Rainier. It included most of the Northern Loop, but instead took a high route around Sluiskin, Crescent and Old Desolate, rather than the painful drop to the Carbon River. And I had long been enamored by the topographic anomaly that is Grand Park, a humongous flat alpine plateau, so I planned a longer start from Lake Eleanor, which would also avoid the crowds. I had no issue convincing Sam, Will, Blake, and Tyler to join so we had a full crew!

The forecast had called for “mostly sunny” although we knew the clouds might be slow to clear. Still, it was looking quite bleak and even raining on the drive in. We jogged up to Grand Park and crossed the mile long plateau in a partial whiteout. It was cold and foggy, making for some spooky vibes. We could only fantasize about the theoretical giant stratovolcano only a few miles away.

The descent down to the West Fork of the White, which is fed by the Winthrop Glacier, was nice and smooth. It still wrecked my quads because I have done so little running this season. I am definitely not the runner I was last summer, but I am still grateful to be able to do any of this stuff after my knee injury last year.

Like the weather, I was feeling quite foggy on the climb up to Windy Gap. I got paged by work a few times over the course of the night, so my sleep was not very good. I definitely wanted to lay down and go to sleep. Maybe that would give the clouds time to clear up. Maybe not.

Briefs bouts of sunshine teased us as we approached Windy Gap. At the rate things were going, we would be in the clear in another few hours. But then an icy, wet breeze slammed us at Windy Gap and we entered the windward side of the ridge. The trees showed evidence of frequent high winds. We debated dropping 3000 ft to the Carbon and just doing the standard Northern Loop, but none of us really wanted to do that. So instead we hopped off the trail and headed into the abyss.

From Windy Gap, we climbed up to a 6500 ft pass between Sluiskin and Crescent, heavily depending on GPS for navigation. We found actually super bomber granitic slabs, which was a surprise for a volcanic region.

On the other side of the pass, we got blasted by wind and mist. Heading into some shrubs, we stumbled across some massive elk trails! There were venerable elk highways, cut into the hillside and free of brush, better than probably 70% of maintained trails in Washington. So we followed the hoof prints across the hillside towards Vernal Park, our second park of the day.

Our feet got soaked by brush as we climbed up towards Vernal Park. Vernal Park was a mysterious post glacial landscape of sand, perfect granite boulders, and little ponds. There were some beautiful granite countertops yearning for my kitchen. Perhaps the most incredible sight were some perfect hoof-skiing tracks from some elk that skied down a snowfield!

As we ascended to the pass near Old Desolate the winds got even worse. It was bona fide raining now, but none of us had any rain gear. We were chilled to the bone. We found a wind break at the pass and watched moisture laden wind swell over the pass, not eager to enter the gnar.

For the first time in the high route, the rock on the other side was actually very unstable and unpleasant. We crossed the boulder field to skier’s left and finally reached flat ground in the upper reaches of Moraine Park. On the west side of the ridge, it was not raining, but the air was somehow even damper and we were completely soaked. We all agreed that this was about as wet as it gets without actually raining.

We continued down a gully cleared with fresh avy debris until finally hitting the Wonderland Trail at about 5720 ft. We wrung out our socks and climbed up to the little pass before Mystic Lake. The weather got instantly better and by Mystic Lake it was even sort of sunny.

It was impressive to ascend next to the terminus of the Winthrop Glacier on the other side. For nearly as far as we could see, the glacier was covered completely in rocks and sand, making it hard to tell where the glacier ended and began. A river rushed from a giant cave in the snout. This was certainly the largest glacier I have ever seen from beneath.

The climb up to Skyscraper Mountain was long and tiresome. I was feeling my effort on the Green Creek Circuit from a few days prior, consuming food at a faster rate than normal. Blake, Tyler, and Will, the three collegiate runners, ran the last bit to the pass while Sam and I did our best to just keep hiking.

It was bitterly cold and cloudy at the pass. It was barely dinner time, but we could feel the air already cooling off down into the 40s and probably below freezing with wind chill. After a hot summer, we wanted some cool weather, not frigid weather!

We dropped beneath the clouds into the lush meadows of Berkley Park. The wind died down and we could hear the occasional shrieks of the local marmot. I watched from above as the boys crossed beneath me into the perfect U-shaped glacial valley, weaving through evergreens, wildflowers, and streams.

I loitered behind the group, meandering down the trail into the wonderland that is Berkley Park. Mossy streams emerged from the sandy hillsides, flowers bloomed at the end of a hot summer, and tall rocky peaks towered to my sides. The trail accompanied the growing stream, moving swiftly and softly, acquiescing to the pull of gravity. It was one of the prettiest descents I have ever had the joy to run.

I caught up to Sam on the final little climb to Grand Park. After getting skunked on views our first time around, we were hopeful for a grand finale. And damn – did it ever deliver.

As we strolled into the park once again, the curtain was lifted and the true sense of amazement began to set in. Grand Park is not a feature of the Cascades – it is reminiscent of the giant valleys in the Uintas, the tundra plateaus of the Absorkas, or the incomprehensible scale of the Brooks Range. It very well may be the largest flat alpine feature in the Cascades. Oh, and it happens to be placed right at the base of the largest stratovolcano in the lower 48.

After struggling for the last 10 miles or so, my legs suddenly felt light and I cruised through Grand Park, setting up for some photos of the others. Shadows were creeping across the meadows, clouds shifting above, and the colors growing soft. The air was cold but the light was so warm. The mountain begged us to stay but the cold egged us to move. So we pranced.

I love to envision an experience and find a route that brings that vision to life. It is not just about the views, but also the timing and the way the movement makes you feel. I chose the longer Grand Park entrance and exit for this route because I wanted to feel small beneath Tahoma, to race the shadows across the meadows, to watch the light paint the grass golden beneath our feet. After getting skunked by the bulk of the route, it was an act of grace by the mountains to give us this beautiful moment. We forgave the weather for being uncooperative. All was good.

The high from Grand Park carried me all the way to the car and I was able to run surprisingly well the entire way out on the soft trail. It was already getting close to freezing, so we jammed back into the car and rolled back down to the lowlands, where food awaited.

“Tour of the Parks” traveled through four splendid parks with Mt. Rainier National Park: Vernal, Moraine, Berkley, and Grand. We all felt that this was a super high quality route that involves runnable trails, an easy off trail section, and excellent scenery if, of course, it is actually mostly sunny. But we made the most of some tough conditions and there was something mystical about emerging from the mist to the final run through Grand Park. Do you believe in magic? I believe in mountains.

4 thoughts on “Tour of the Parks”