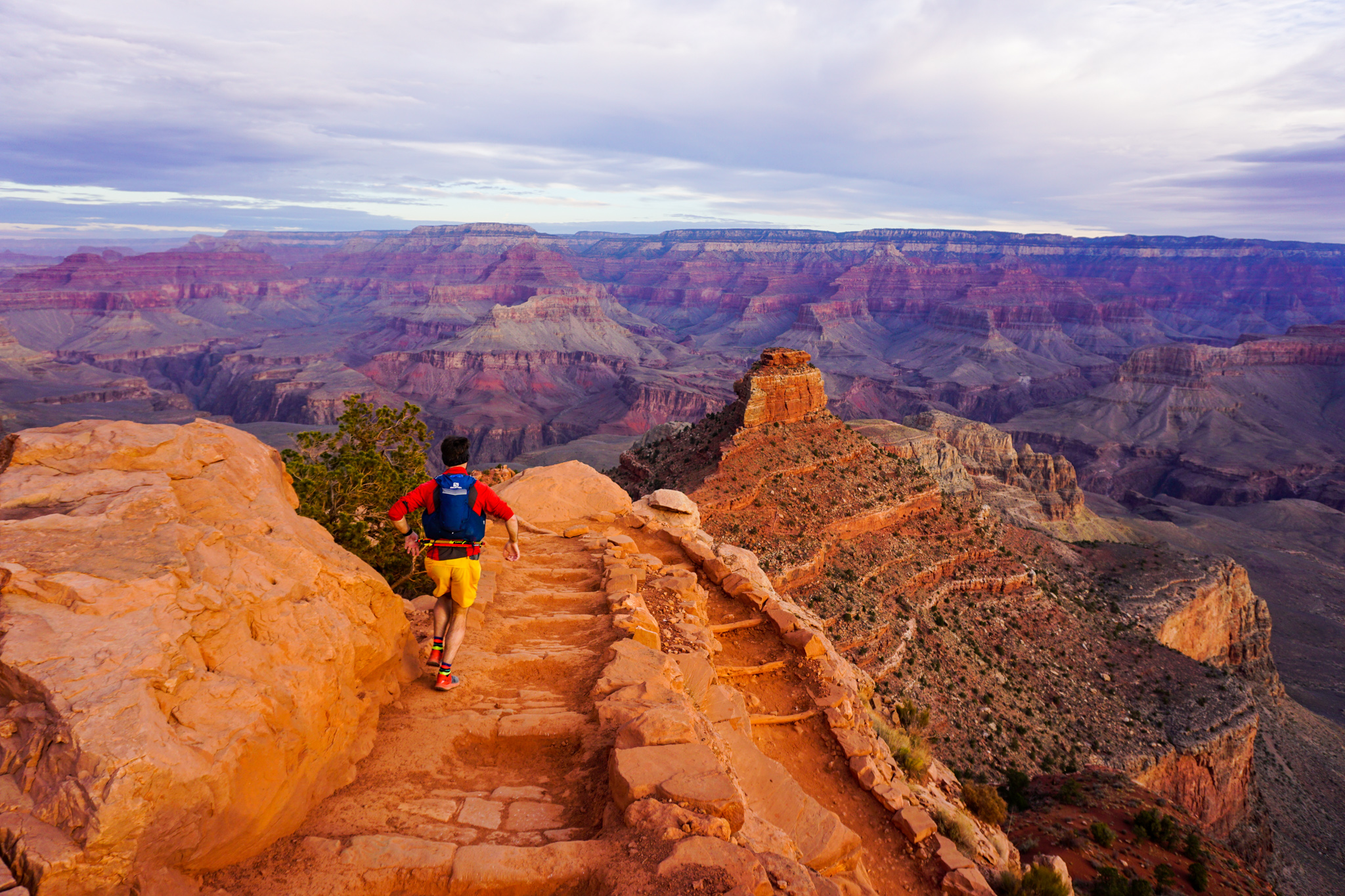 A Double Crossing of the Grand Canyon

After my Red Rock climbing trip with Kylie, Sam picked me up from the airport. After a long summer, I was ready for some rest and a break from running. Then Sam told me he was flying to Vegas in two weekends to meet Daniel and Blake, who were embarking on a desert road trip, to go run Rim to Rim to Rim (R2R2R) in the Grand Canyon. R2R2R is in the upper pantheon of famous ultramarathon routes in the entire world, crossing the Canyon twice. A bucket list run with my best friends? A convenient trip with campsites and transportation pre-arrange by Daniel? I had to a book a ticket. So much for that break from running…

Sam and I flew into Vegas on a Friday morning, where Daniel and Blake picked us up and we started the drive to the Grand Canyon. We did a little shakeout run to check out the canyon, made some gourmet quesadillas and ate brie, then got an early sleep.

We woke up in the dark the next morning and drove over to the South Kaibab Trailhead at sunrise. Unfortunately, you have to park about a mile from the actual trailhead, adding onto the run, but we did not know this before hand. There are two trails that lead down to the Colorado Trailhead: the South Kaibab and the Bright Angel. The South Kaibab is steeper and shorter, but the Bright Angel is smoother. We decided to go for the shorter trail, which would we quickly regret…

I had briefly seen the Grand Canyon when I was in fourth grade or so, but it was far more impressive this time around. The sheer size and complexity of the terrain is stunning. At times, the intricate maze of cliffs and canyons does not feel real, like you could just reach out and poke through the green screen.

We started down the South Kaibab trail, which was very crowded with other hikers. Most were hiking a loop with the Bright Angel trail. There was a lot of passing to do.

None of us really knew what to expect from the trail quality. We had heard many conflicting things, from “cruiser” to “rocky”. In a way, they were all correct and all terribly wrong. The South Kaibab trail is a mule trail, which means it is extremely firm, rocky in places, and has wooden steps nearly the entire way down. I think more accurate terms would be a “cobblestone sidewalk” or “low grade staircase”. Either way, it was absolutely awful on our bodies. The stairs were awkwardly spaced for running and we found ourselves slamming into the steps, struggling to get a nice stride. Only partway down, I knew my legs were going to be trashed.

The scenery of the South Kaibab trail is stunning, a 10/10. The trail engineering, blasting through cliffs, navigating drop-offs masterfully, and even tunneling through the rock, is an 11/10. But the trail quality for running is easily a 2/10. It was the worst running descent I have ever done – completely shell shocking to my body.

Down, down we went. The trail drops 5000 ft to the Colorado River. I enjoy runs where you begin with hiking uphill and end with a gradual descent. This route has the opposite profile, and I knew it did not play to my strengths. But there was little I could do as I felt my quads getting shredded step by step. Enjoy the incredible setting? I was able to do that at least.

One has to descend thousands of feet before one can actually see the Colorado River. From the bottom, you cannot see the top of the canyon. I knew that Grand Canyon was big, but there is no better way to experience its size than to wander inside of it. Even if you are not a fan of desert scenery, I recommend trekking to the bottom of the Canyon at least once. It will blow your mind.

We walked across the bridge and then got some water at the spigot on the other side. There are a few spigots on route, but many of them get turned off after November 1st, so late October is a popular time for R2R2R. It was only an hour and a half into our run, and my legs felt worse than they usually do after 12 hours. This was not a good sign, but I felt like I could recover some on the gradual uphill.

The North Rim trail passes Phantom Ranch and climbs very slowly through a stunning slot canyon. The trail was blasted out of the cliffs to provide passage up this incredible canyon-within-a-canyon.

Suddenly, we heard a voice behind us and a slim man in Hoka gear with a man-bun zoomed by us, in a seemingly all-out sprint. It was Jim Walmsley! Jim is one of the best ultra runners in the entire world, holding the R2R2R fastest known time (5:55!). He was absolutely hauling down the trail, but did not seem tired in the least bit. We were all a bit star struck.

Daniel was not feeling good, so Sam and Blake went ahead. Daniel had an elevated heart rate, even while sitting down, and felt a bit feverish. After waiting a while, he decided it would be best to turn around and take it easy. He did not want a repeat of the Alpine Lakes Crest Traverse earlier this summer, where he pushed his body a little too hard.

So I said goodbye to Daniel and continued up the North Rim trail by myself, although there were plenty of other “rimmers” (can we call ourselves that?) to chat with. The canyon opened up and I passed water sources at Cottonwood and Manzanita before starting to crank uphill more.

I started hiking uphill with a nice woman named Janelle. She had a baby five months ago, and was now doing R2R2R over two days, with support from her family! As we started talking more, I discovered that she was actually Janelle Smiley, a moderately famous alpinist from Jackson Hole! It was nice to have company on the long climb.

The North Rim Trail is a pure work of art, climbing gradually through a maze of cliffs and canyons, traveling above and below vertical precipices. It feels improbable, yet goes with a fair bit of dynamite.

Blake and Sam zoomed by me, headed downhill, just minutes before I reached the North Rim Trailhead. I got to the north trailhead in 5:55, which is, coincidentally, the same time Jim Walmsley needed to do the entire R2R2R.

The NPS website had said that there would be water at the North Rim Trailhead, but it was unexpectedly turned off already. This was a big deal to rimmers like us, but luckily, there was a giant support group with extra water at the trailhead. They were supporting their friends, who started at 3 am and likely would not finish until 10 pm. I love that people of all paces attempt R2R2R. There is a definitely a shared camaraderie between all rimmers – endless fist bumps and words of encouragement, no matter your speed or status.

After a 15 minute break, I started back downhill. The North Rim Trail is a joy to descend, especially through the improbable sections where the trail has been blasted out of the cliffside. A trip here actually could mean death, but fortunately the trail is completely smooth and cruiser.

I had a brief resurgence during this nice descent but then started to feel pukey as I got to the flatter terrain of the lower canyon. Blake was waiting for me at Cottonwood, and that was a huge moral boost as we plodded down the slot canyon. This section goes on and on. I had to stop and sit every mile or two to let my internals settle down before I could jog again. Slowly and surely, we made our way back to the Colorado River.

Sam had been waiting for us at the Colorado, and so we all took a break before beginning the 5000 ft death march back to the South Canyon Rim. The evening air was cool and breezy and the Canyon felt empty, except for a family of bighorn sheep.

My gut was still resisting any real quantities of food or water, so I trudged on, toeing on the edge of a bonk. The steps that had destroyed my quads on the initial descent were causing my quads to cramp on nearly every large step. Luckily, I had poles to take some of the weight off my legs.

Desert sunsets and sunrises are special, with such long, expansive views. Here in the Canyon, there is a mosaic of red, yellow, and orange rock to catch the rays of the golden hour.

Darkness came quickly and so I pulled out some tunes to keep the spirits high. Did you know that Sam knows nearly every single word to “Lose Yourself” by Eminem?

The stars came out and dust swirled in our headlamps from the wind. But a light was visible on the South Rim and soon enough were heard the whoops of Daniel and we were back at the trailhead! We were completely wiped, but so happy – happy to be done, and happy to have done.

R2R2R was truly an incredible run and I am grateful to have experienced it with three of my best friends. This route gets a lot of hype, but no words or photos can really capture the scale and complexity of the Canyon. It feels and looks like a completely different world. It was definitely challenging for me, working through more fatigue and pain than I have felt in a long time, but totally worth it and an incredible way to wrap up the fall season!