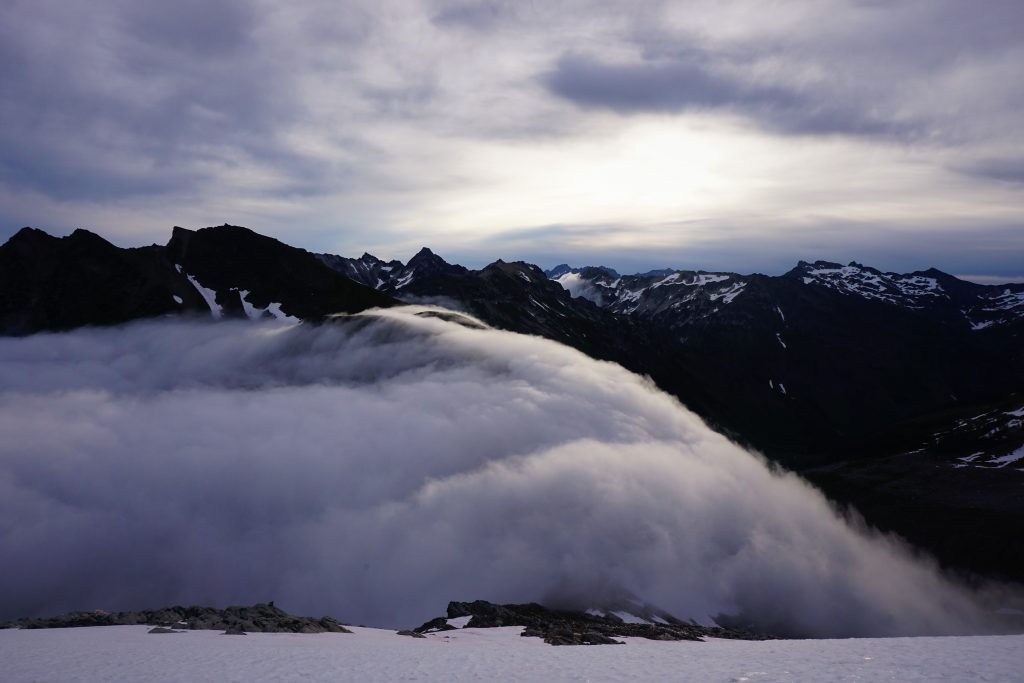 Disclaimer: I have no formal education in meteorology. I take no responsibility for you getting skunked, pissed on, or washed off your objective. This is the Pacific Northwet, after all.

These general weather concepts are rather basic, but lay down the foundation of weather here. These all might be old news to you, but it is worthwhile reviewing the basics for some.

TLDR: The PNW has a maritime climate west of the Cascades, and a drier climate on the east side. Weather generally comes from the west and thus the western slopes of the mountains get a large amount of rain and the eastern slopes are rainshadowed.

Western Washington has a maritime climate. This means we have generally moderate and dry summers, and mild, wet winters. Clouds can be common at any time of year.

The Jet Stream moves from west to east. Thus, almost all of our weather patterns arrive from the west off the Pacific Ocean. Weather, whether it is sunny “weather windows” or storms, also generally move from west to east. There are actually multiple jet streams, but I think that usually we are concerned about the Polar Jet Stream here in the PNW.

High Pressure brings good weather. High pressure causes air to generally leave this area in search of areas of lower pressure. Air sinks and disperses, making it hard for clouds to form. This is a giant over-simplification.

Low Pressure means bad weather. With low pressure centers, winds head towards the low pressure, in a spiral manner. Air rises, providing a pathway for moisture to rise, cool, and condense into clouds.

Winds move from high to low pressure, in a spiral manner. In the Northern Hemisphere, winds rotate counter clockwise around low pressure centers, explaining why our greatest wind storms come from the SW to S, rather than due W. The higher the pressure gradient, the stronger the winds.

Rising air cools. When air is forced upwards, either by terrain or a low pressure system, it cools dramatically. Cold air cannot hold as much moisture. Thus, even if no moisture is added or removed, the humidity percentage will rise as the air cools until air condenses into clouds and eventually starts raining or snowing.

Sinking air warms. As air drops, either by terrain or high pressure, it warms quickly. Warm air can hold much more moisture, so clouds dissipate and precipitation stops. This is why you so often emerge into the sun while driving east across the mountains.

The Pacific Ocean has a huge impact on our weather. The Pacific Ocean provides an endless source of moisture for rain and clouds. It also moderates our temperatures, keeping the summers here on the coast relatively cool and winters mild.

The Cascade (and Olympic) Mountains also have a huge impact on our weather. Mountains force air upwards. On the windward (west) side, this means air condenses, cools, and releases its moisture on the mountains. On the east side, the air descends and warms. By the time the air has reached the eastern foothills, most of the moisture has left the air, which is why we have a desert on the eastern half of the state. You can think of the mountains and moisture like wringing out a towel. This is often referred to as the “Rainshadow Effect”. This occurs with both mountain ranges. The Olympics produce a strong rainshadow around Port Townsend and Sequim in the NE corner of the Olympic Peninsula (since our wettest storms come predominantly out of the SW). When cold air comes rushing out of the Fraser River Valley, it hits the Northern Olympics near Port Angeles and dumps snow at Hurricane Ridge.

The Rainshadow is strong here. SW slopes of the Olympics like the Hoh receive 140 inches of precipitation per year while Sequim receives only 16 inches, a factor of nearly 10x! Areas east of the Cascades receive only 10 inches per year. Even Seattle is relatively rainshadowed, getting approximately 38 inches per year.

The direction of storms has a huge effect on precipitation. Sometimes storms come out of W, sometimes SW, sometimes NW. Storms from the north tend to be cooler, while southern storms tend to bring the most moisture from the subtropics, but also the warmest temperatures (e.g. “Pineapple Expresses”). If weather is out of the SW, Crystal Mountain, which is NE of Rainier, might get very little snow. But a true westerly storm would dump much more snow. In general, true westerly storms are the greatest precipitation producers on the western slopes of the Olympics and Cascades. You imagine the energy of the storm being a function of the sine of the angle between the direction of the storm and the range. The closer to 90 degrees, the stronger the precipitation will be, and also the stronger the rainshadowing.

We see huge variations of weather across tiny distances here. Because of our complex geography, we can witness incredible weather gradients across such small areas. During strong storms, the SE side of the Olympics can receive 100x the precipitation of the NE corner. The temperature can vary by 10 to 15 degrees from the coast to a few miles inland. The weather can go from rainy and cloudy to sunny and warm just a few miles over the pass, but this usually means winds on the eastside with the large temperature, and thus pressure, gradient. Details matter.

Offshore (easterly) flow is required for heat waves. Most of the time, even in the summer, onshore (westerly) flow is typical. For it to get truly hot in Seattle (90+ degrees) we need easterly flow, resulting from high pressure in the interior and lower pressure offshore. This allows hot air from the desert to rush over mountain gaps into Western Washington. Where are the hottest spots? You guess it: western foothill towns (Marbelmount, North Bend) where that warm air descends and warms even more.

Fraser River Valley (northerly) flow is usually required for snow in Seattle. The Fraser River Valley is a low gap in the Costal Range of BC that allows very cold air, under special circumstances, to flow out of interior BC and infiltrate the Puget Sound Lowlands. The trouble is, cold air cannot hold much moisture so it is usually very dry. But if this air collides with moisture from the south, we can get lowland snow. If this happens, grab your skis and get up to your favorite ski area, because this will be one of your only chances to ski real “powder” in the Western Cascades.

“El Nino” brings warm, dry weather to the PNW. El Nino is characterized by above average sea surface temperatures in the Eastern Pacific Ocean. This causes the Pacific Jet Stream to move further south and hammer the Southern US with lots of moisture. For whatever reason, it causes the Polar Jet Stream to miss us to the north, leading to us to being warmer and drier. Cycles like this usually last half a year to a year, but can last multiple years. You can read more about this phenomenon here.

“La Nina” brings cold, wet weather to the PNW. La Nina is the opposite of El Nino: below average sea surface temperatures in the Eastern Pacific. This tends to be associated with high pressure in the Northeastern Pacific off the Gulf of Alaska. The Polar Jet Stream is force northwards into Alaska but then rotates clockwise around the high pressure and barrels into the PNW with plenty of cold and moisture. This can create some great ski winters! 2020-2021 was a La Nina, contributing to an excellent snowpack. 2021-2022 is forecasted to be a “double-dip” La Nina.

The “Marine Push” is a prominent feature of Western Washington weather. During the summer, we often wake up to low level thin clouds in Western Washington that often “burn off” at some point during the day. These “marine pushes” are caused by air on the east side of the mountains warming more rapidly. Warm air is less dense and rises, creating low pressure. But off the coast, we have higher pressure (a common feature of PNW summers). As it cools at night, moisture that was picked up by the warm daytime air condenses into clouds on the coast. The pressure differential causes the clouds to move inland. Sometimes the clouds do not even reach Seattle, but other times they move all the way to Cascade passes. Some days they burn off by 10am, but other days it remains cloudy and drizzly all day in the lowlands. Some days, you can get above the marine layers in the mountains, making for beautiful views. Be wary though, because as the air warms, it rises, causes vertical mixing and sometimes you may find yourself socked in by the rising clouds after you enjoyed a nice sunrise above the marine layer.

Next up: Part 2 – Weather Forecasting and Resources

In my next post, I cover the weather resources I use for my planning!

2 thoughts on “Weather in the Cascades Part 1: General Weather Concepts for the Cascades”