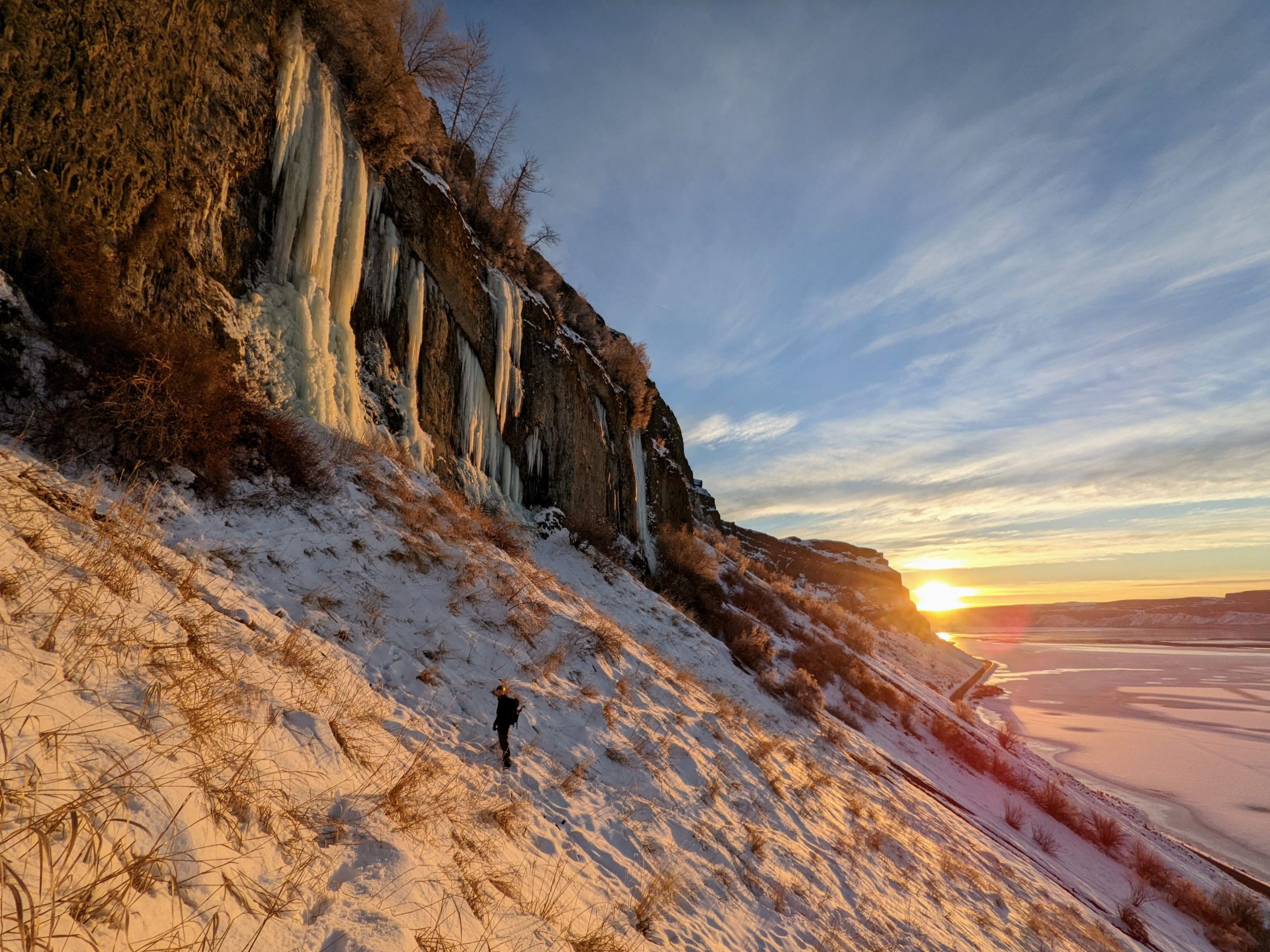 A Castle of Ice

Ever since Jacob and I started ice climbing during my senior year at Gonzaga University in Spokane, we wanted to check out the fabled Banks Lake Ice. Old timers told us how the climbing was “the real deal” – steep, long, and inspiring. Banks was one of our favorite rock climbing destinations, with the excellent moderates at Roadside Rock, Northrup Canyon, and Golf Course Rock. It is easily my favorite spot in Eastern Washington and the legends of giant roadside ice only added to the allure.

This winter, we got some confidence back by climbing for a week in Hyalite Canyon, where we initially learned to climb. Christmas to New Years brought some intense cold, which got everyone excited for Washington Ice. Unfortunately, it turned out to be too cold, cutting off the water source for most of the climbs in Eastern Washington. Instead, we just skied blower powder in the Cascades, so we could not complain too much.

Jacob was planning to leave to Colorado so we made plans to check out Banks for a day, regardless of how much climbing there was to be had. We were finally going to do it. However, the weather had other ideas. Intense avalanche danger caused Snoqualmie Pass to be closed for four days straight! When it finally opened, I drove over the pass and into Eastern Washington, where the cold air still hung out.

I had seen promising photos of Vantage, but we only had one day so we needed to optimize our climbing. I got to Vantage late at night and hiked over towards Frenchman Falls. The drips to the right, which people had been climbing previously, where ghostly white. This sort of ice feels aerated and hollow and is generally unsafe. I then walked over to Fuggs Falls in the dark. I had been up to it in the spring, when it was flowing, but this time I could not find a single drop of ice! It was bizarre, but I guess the water source completely turned off during the flash freeze this year.

Even though nothing was in at Vantage, I enjoyed my moonlight walk, following the footprints of creatures in the snow. As a rock climbing destination, Vantage is old news, but it felt exciting to explore the area in a new dimension. I was even more excited for Banks.

The next morning, I enjoyed a spectacular sunrise over the Columbia Basin. As I passed Soap Lake, I left the flatlands and entered the long coulee that would lead me out to Banks Lake. I have always felt that this area was vastly under appreciated for its beauty, but in winter, it was even more beautiful with its frozen lakes and dangling ice pillars.

At Coulee City, I met Jacob and we started the drive up the shore of Banks Lake in thick fog. The fog made it a little hard to see the climbs, but fortunately the climbs are so close to the highway that we could still see most of them. In general, this Banks season has been rather disappointing so far. It got so cold so suddenly around Christmas (highs of 0F) that most of the climbs dependent on freeze thaw in drainages have not formed. Almost none of the classics were in. But we had some beta that a few moderates were in good shape.

We pulled off at milepost 14 and managed the short hike uphill to the two unnamed climbs in this area. In almost any other region, these long moderates would be named, but here at Banks, they are not even in the guidebook!

Banks Ice is notoriously harder than it looks, and I got to experience that on my first lead of the day. The climb was mostly mellow with one steeper 3+ section. But the fresh ice had to be cleaned, making my lead more taxing than expected. After hooking my way up Hyalite climbs, I had to swing many times to get to the better ice and work hard for secure feet. But it was a very enjoyable climb!

Next, we moved to the bigger climb just to the left. It had an initial steep curtain followed by some lower angle ice that ramped up to a long, sustained crux to the finish. Jacob led this and stopped about 30 ft before the top to avoid the hardest part. This climb was super fun and aesthetic!

Our first two climbs of the day were most excellent and we already felt the trip had been worthwhile. The next spot we wanted to check out was “Peewee’s Playground”. The name sounded rather lame, but as we were learning quickly, even the small dinky little climbs at Banks are remarkable!

Fog made it hard to see the base of the climbs at Peewee, but we walked up and found quite a few suitable climbs on the left side. We started with Peewee #4, an easy WI3. Although it was easy, it was still decently long and provided excellent climbing!

From the top, Jacob pulled up the rope and moved us over to Peewee’s #5 next door so we could top rope it. This line was steep but somewhat picked out by others, so we could hook and save energy. There appeared to be a second pitch above, and so we decided to check it out.

As Jacob led up the second low angle pitch, the sun finally came out behind us and the entire lake revealed itself. The bushes were coated in thin layer of snow, shining in the sun. Everything just glimmered. It was one of those completely tranquil, beautiful moments where I felt deeply at peace. People sometimes ask me what I like about ice climbing. I love the ephemeral nature of the climbs, the excitement of the hunt, the methodical movements, but possibly the biggest motivation is simply the beauty of these castles of ice.

We rappelled down as the sun set over the coulee. Golden Hour comes so early at this time of year, but the sun arcs a lower angle across the sky, delaying its descent and milking the soft light.

I raced up one last top rope lap before we were swallowed by the shadows.

In so many ways, this felt like an absolutely perfect day. As crazy as it sounds, climbing ice at Banks has been one of our top goals ever since we started ice climbing. Place is important and for both of us, this place carries so many fond memories and important moments of growth in our climbing careers. Banks is an incredible place in all seasons, but it is truly marvelous when the ice takes hold.

We had heard many legends from locals about Banks Ice – that it was fickle, that it was incredible, that it was the “real deal”. It is all true and then some. On a good year, like 2019, it is easy to see how Banks, with many dozens of roadside climbs, could be one of the best places in the entire world to climb steep ice. The climbs are long, varied, accessible, and aesthetic. But we were also pleasantly surprised to find high quality moderates in a place that has a reputation for being very challenging.

Jacob and I have gone through many phases in our ice climbing together. We have had more ambitious days, but this year we have enjoyed returning to the basics, focusing on the pure joy and challenge of climbing. It was special to finally see through this dream of climbing at Banks together.