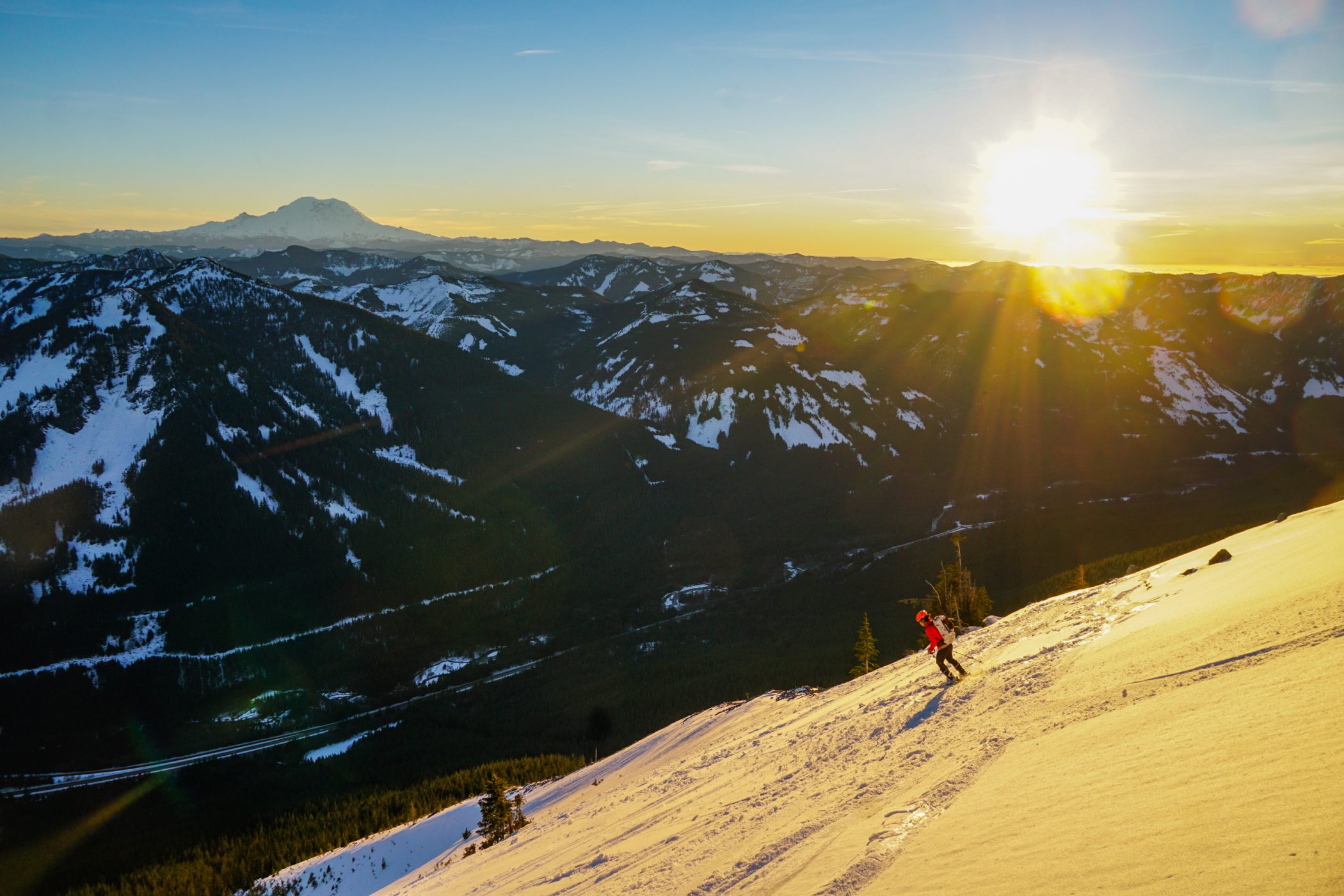 After some all-time blower powder conditions around the Holidays, January has largely been a major bust here in the PNW. Heavy rain and warm temperatures have made for marginal ski conditions mostly, so I have leaned into the ice climbing, trail running, XC skiing, whatever else. But I can only sit around looking at sunny mountains for so long, so with another nice weekend forecast and questionable snow quality, I made plans to attempt the Kaleetan Granite Ski Traverse with Rio and Sam. Some friends did it last winter during the Junuary spell and it sounded intriguing, as I had never skied Kaleetan nor Granite.

We started around 8 am and were surprised how few people were on the skintrack to Source Lake. Incredibly, there was no one else at the Source Lake Social Zone (SLSZ)! A few inches of snow had fallen recently, making the skinning on top of a crust easier while we were in the shade. However, once we entered the sun beneath Bryant Peak, our skins started glopping with hot pow.

We transitioned at Bryant Col and I tried to ski down but literally could not move. I snapped out of my skis and found a few inches of snow sticking to my bases. Should have waxed my skis!

The ski down to Melakwa Lake was pretty bad. In my skinny, short spring skis, I broke through the windboard crust. We had to cross a nasty pile of frozen avy debris down near the bottom.

There are a few different ways to approach Kaleetan in the winter. By far the most direct is to skin towards Melakwa Pass and then curve up and left just before the pass up a steep snowfield. I believe this is called the “White Ledges” route in the summer. In the south facing valley between Kaleetan and Chair, it was sweltering.

As we climbed the snow to the shoulder of Kaleetan, we entered the shade and the snow became extremely firm. We had aluminum crampons and a single ice ax, but we would have liked a second tool in the 45 degree neve. It was incredible how sun affected and soft solar aspects already were in the heat, while shaded aspects were still bulletproof. After a few tenuous minutes, we reached the sunny shoulder of Kaleetan.

We were very glad to be continuing on the traverse, because skiing down the slope we just climbed would have been pretty terrifying.

Rio spotted an irregular rock on the summit of Chair Peak. It turned out to be two climbers!

The rest of the climb to the summit went easily in the sun softened snow.

Kaleetan has impressive prominence as the highest principal peak in the Snoqualmie region. We could see all the way to Downtown Seattle, the Olympics, Glacier Peak, Adams, and Stuart. The fog inversion layer was still strong in the lowlands, but it damn it was nice up here.

We realized this traverse was going to take a bit longer than it looked on paper and we needed to get moving if we did not want to get benighted. We downclimbed the top 50 ft through the choke because it was too rocky to ski. On the main face, there was a bed surface where the recent snow had slid. This bed surface had corned up quite nicely and made for some good skiing, although it was pretty narrow so we could not quite open it up.

After the 300 ft of pseudo corn, it turned to mush mush, but at least the fun type. Again, I wished I had fatter skis. We just generally followed the drainage down and down. It was fun terrain, with little gullies, mini golf bumps. Eventually we ended up at the pond around 3950 ft, far below the lofty summit we had just skied from.

We continued all the way down to the Pratt River at 3400 ft. The terrain was never brushy and there was sufficient coverage. Down here, it was practically raining from the melt off the trees. The sun shone beautifully through the mossy, green old growth trees. For the first time this ski season, it felt like I was on a real adventure.

We could not find any rock or log crossing, so we decided to ford the river. It was only about a foot deep, so Rio and I locked down our ski boots and ran across, while Sam bravely went barefoot.

From the Pratt River, Granite Mountain is only 2000 ft above, but this climb involves surprisingly complex terrain, with many lakes, waterfalls, and ridges. I set out on a mission, eager to get down Granite before the snow refroze. My skis were three times their normal weight with glopping skins and wet-snow laden top sheets, but the fire within me had been sparked, and I felt a growing resurgence of energy as I plowed a skintrack back up into the alpine.

The snow was still powdery and cold on the surface of Tuscohatchie Lake, but we knew warm, corny slopes lied above. The temperature inversions and microclimates throughout the day were fascinating.

The familiar sounds of I90 returned on the final climb to Granite Mountain. As I crested the summit ridge, I spotted two familiar figures: Joe and Phil! They had done the Kaleetan Granite Traverse last January with our friend Nick. Joe is a real photographer so I took the opportunity to get some rare pictures of me.

A few minutes later, Sam and Rio popped out from the shade. Our timing could not have been more perfect. The sun was getting low and the sky was lit with a soft yellow glow. Is it just me or have these January sunsets been absolute fire lately?

We wasted no time transitioning and dropping onto the giant south face, which looms above I90. I have driven by the massive avalanche chutes nearly a hundred times in my life, but this was my first time actually skiing them. They are big, steep, and beautiful. “It’s corn!” yelled Sam. Sunset corn? It sounded too good to be true.

After a decently challenging day with a buffet of surfaces, it was a treat to enjoy some tasty corn at last. A winter harvest of Snoqualmaize! While lapping easy powder is good fun, days like these tap deeper into the well of stoke and remind me of my roots. Adventure lies at the heart of why I do what I do. When it all works out so perfectly, moments like these are hard to forget.

Below 3500 ft, it turned a little more to survival skiing on the right side of the poop chute. We kept riding it down below 3k before following tracks into the trees and eventually hitting the trail. We made it all the way down the trail back to the car without taking our skis off, although some creek crossings were necessary. In the fading light, we zoomed the last switchback before popping out at Rio’s car to the glowing sky above us. What a day!

The Kaleetan Granite Traverse provided an adventure beyond the level of most typical Snoqualmie Pass ski tours. While it does not optimize good skiing for the effort required, it is a great option on a sunny day when the snow is variable and you want an adventure close to home. I throughly enjoyed the 3000 ft descent from Kaleetan to the Pratt, the beautiful forests down low, and the final epic descent off Granite. After a slow start to the season, it felt revitalizing to return to the adventure mindset in Snoqualminix. Ski season is long here, and I am sure many more adventures are to come.