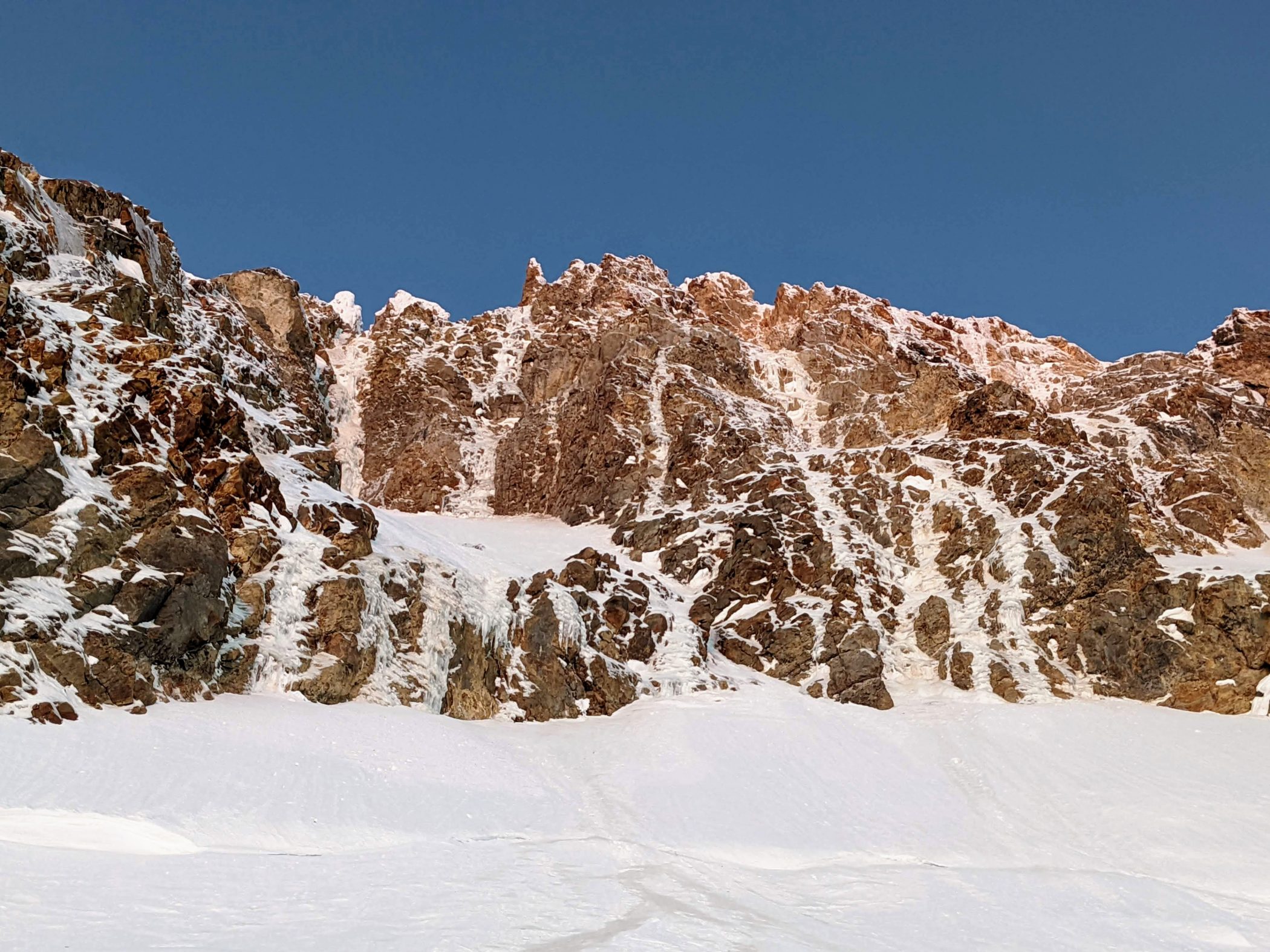 Situated an hour from Portland, with multiple plowed roads close to 6k all winter, Mt. Hood has some of the most incredible alpine climbing and access of any venue in the lower 48. Usually, I am not jealous of Portland, but I do admit they have Seattle generally beat for access to moderate alpine ice climbing during the winter and spring months. Over the last few weeks of this “Junuary”, Hood climbers have been getting after it.

During one day of ice cragging in Eastern Washington earlier this month, Wayne Wallace kept telling me about the Black Spider Wall on Mt. Hood. It is a relatively obscure east facing wall that has a dense concentration of moderate ice/mixed routes, most of which have only been climbed a few times. Compared to the south and west side routes, which can see hundreds of climbers per day, the Black Spider wall somehow has remained relatively unknown and mysterious. During the 2000s, Wayne became obsessed with the wall and made a dozen attempts before finally succeeding with his First Ascent of Center Drip in 2010. During our crag session, he kept showing me current photos of the wall looking very icy. His enthusiasm for the wall made me think that maybe I needed to make a pilgrimage to check out the Black Spider.

Being a big east facing wall on a disintegrating volcanic choss pile, the Black Spider is not to be taken lightly. Morning sun can destabilize the wall and cause rime and rocks to fall down. Freezing levels were 10-11k for much of the month, but reports indicated the wall was staying fat because of winds and long clear nights. My friend Michael and I watched conditions very carefully, talking to Wayne, a local climber Matt Z, and any reports we could get of upper mountain conditions from south side climbers. I have become much more picky about choosing safe conditions for alpine climbs. Alpine climbing already has smaller margins than cragging, so I want to stack the odds in my favor. After an insanely hot weekend, multiple weeks of negligible precipitation, and a modest cooldown, it seemed like the mountain was about as locked up as it would get. The Black Spider was on.

Michael and I drove down in the evening on Monday and parked at the Timberline to sleep. We woke around midnight to the car shaking from strong easterly winds. After 10 minutes or so, it showed no signs of dying down, so we ended up driving back downhill to sleep somewhere more protected! We were pretty worried about getting blown off the wall the next day, but that was a problem for the morning.

After a few hours of good sleep, we left the car around 4am, wearing crampons from the parking lot. We turned our headlamps off under the half moon as we walked up towards the Palmer Lift. We crossed into the White River Canyon around 8600 ft, watching for cracks in the snow. Our ankles screamed in pain as we sidehilled across the canyon to the far side. The snow was extremely firm and we had to let our ankles roll into the slope for our crampons to make secure contact. I even brought out an ax here because a slide would be pretty bad.

The sidehilling continued as we traversed eastward around the 9000 ft elevation band. But the discomfort of our ankles was gradually displaced by the beauty of the glow over the eastern horizon and the anxiety in my gut as we started to make out the Black Spider wall itself. To be honest, I was nervous in the days leading up to this climb. It would be my first proper alpine ice climb since Sloan. Why is this wall climbed so rarely? Am I good enough climber for this? Will it be cold enough? Maybe a bit of doubt is healthy. Fear is not the enemy of alpine climbing, but rather a companion that you learn to listen to and tame when appropriate.

We stopped at a flattish spot around 9800 ft on the Newton Clark Glacier. The sky was glowing and ready to burst. We pulled out the rope, rack, and got ready for the climb. The Black Spider loomed above us, with the many “spider legs” of ice streaking down the wall. Reports were true – it looked incredibly fat and icy. There were at least 6 or 7 routes that looked in, possibly more. But Michael and I had our eyes set on Arachnophobia Direct, a proud line that split the central part of the face. It was first climbed directly in 2017.

I started ascending the steep, firm snow towards the wall. The sun’s first rays washed over me just as I crossed the first of the two bergschrunds. The schrunds were easy to cross, but decently open for late January!

We were now at the base of the wall in full sun, so it was go-time. Michael already had the rack and launched upwards onto the ice.

I kept paying out rope until there was no more, so I took down my anchor and started simul climbing. The ice was an interesting blend of alpine ice – white, featured, and incredibly sticky. Each swing sunk perfectly into the ice, a “one-swing wonder”. There were thicker blobs of ice for screws, but mostly it was just sweet, sweet sticks. In all, Michael strung out about a 90 meter pitch of incredibly sustained, fun, easy AI2-3 climbing. It was mostly rambly with a few near-vertical steps. There was not even a bit of snow in the entire pitch, just alpine ice and snice (a consistency between snow and ice). I had to focus on my footwork, making side steps, to prevent the inevitable calf fatigue. It was an incredibly fun pitch and left us feeling confident about the terrain above us.

I took the lead and hugged the left side of the first snowfield, placing surprisingly solid screws in fat blue ice along the edge of a cliff. The “direct” variation of the route loomed above us, and so I built a belay in a protected, shaded alcove just before it.

Above us there were some delaminating ice flows. These would be a sketchy AI4, but luckily there was a lower angle passageway to the left that was hidden in the shade. This pitch had spectacular “hoods”, as Michael called them. (Possibly named for the mountain where they form?) Hoods are these flat bulges of ice that stick out and overhang the ice beneath them. This climb was filled with hoods, making for some of the most fun, three dimensional ice climbing I have ever done. At times, it felt like I was rock climbing on ice, traversing around hoods, climbing ice aretes. It was fantastic!

In this shaded variation, we had curved leftward out of the main funnel of the route. For the next pitch, I had to get us back into the gully. The ice had seen a lot of sun and warm temps up here and was turning more and more into snice. Screws were uninspiring, but the sticks were still hero as I led us up and right, traversing over thin exposed terrain back into the main gully. Every swing and kick was sticky, like I was a spider glued to the white surface beneath me. I felt my alpine confidence coming back with every pitch, and I started to relax, confident at last that we were going to cruise through this route.

Michael dispatched the final 50-100 ft ice step and then we were simuling through the upper mountain, weaving through halls of rime ice covered gendarmes in the glittering sun. The upper mountain of Hood is truly a different world, more reminiscent of Patagonia than the Cascades. A world transformed by wind, water, and sun. A castle of rime high in the sky.

The wind had been generally light on the wall, but enough to keep us cool. On the summit, it was perfectly calm and we enjoyed a peaceful, relaxed lunch atop Oregon’s highest mountain. From racking up beneath the schrund to the summit, it had taken us only four hours. Six long pitches covering 1600 vertical feet of technical terrain. After blitzing up the face, it felt great to just relax and enjoy the sunny day. During my first and only other summit of Hood via the Pearly Gates, I was in a lenticular cloud on the summit. But today, Junuary reigned supreme.

The descent down the Old Chutes was annoying, front pointing down 40 degree blue ice. In fact, the entire descent, all the way down to the lifts, was blue ice that exhausted our ankles. We watched a snowboarder slip and take a 600 ft ride, checking in on him at the bottom (he was okay). NWAC wasn’t kidding when they said that the biggest hazard was not avalanches, but simply “slide-for-life” conditions.

We arrived back at Timberline in the early afternoon, with plenty of time to drive most of the way home in the light. Michael remarked how strange it felt to be finishing a winter alpine climb without a headlamp. In general, he captured the sentiment that the whole day was just remarkably chill. The climbing was easy, secure, and fun. Nothing fell on us. It was relieving to realize that alpine climbing does not have to be scary. With patience, timing, preparation, and some bit of luck, it can actually just be fun.

Did the Black Spider Wall live up to the hype? In my opinion, it provided some of the most fun, aesthetic, and sustained easy alpine climbing I have ever experienced. There are so many excellent looking routes on this wall and variations that likely still have yet to see an ascent. Good conditions may be fleeting, but when it is good, it is really unique.

If this was the end of my ice season, as it may be with a bunch of planned ski trips, then I am still content. I returned to the basics, improving my technique cragging and working on my lead head. I am climbing better than I ever have before. Most importantly, I have proven to myself that I can move on, learn to tame the voices of doubt in my head, and return to doing something I love.